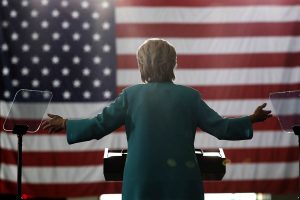 Hillary Clinton limps into her second year in office badly battered and in poor humor. She has lately refused to hold press conferences, or even speak off-the-record as she had done regularly in the early days of her presidency. That openness fell victim to 12 months of ceaseless, usually baseless, attacks from both the Right and Left. She has just appointed her third press secretary, each one reined in more than the last, alienating even those news outlets that should have been natural allies. From the extreme right, the Trump-Breitbart cable news network, with funding from the Mercer family and Koch brothers, was launched a month after the 2016 presidential election and has been tirelessly pounding away at President Clinton and her husband. Now unapologetically nativist, racist, misogynistic, anti-Semitic, and anti-immigrant, the network has encouraged violent, white supremacist rallies across the Midwest, South, and Pacific Northwest. In a number of instances the police have stepped back in solidarity with the marchers, and the National Guard had to be called in. Counter-rallies from the left and the otherwise morally affronted have generated bloody riots in at least two dozen American towns and cities. On the heels of the extremely narrow Clinton electoral victory, and with the Republicans still in control of the Senate, Fox News has been challenging the election results and accusing the Democrats of voter fraud, i.e. millions of “illegals” being allowed to vote for Clinton. When not carping on voter fraud, the network’s news anchors and “experts” have been disinterring all the generally discredited past right-wing attacks on the Clintons:  Whitewater; the Rose Law Firm in Little Rock, where Hillary was once a partner; Paula Jones; even the alleged “murder” of Hillary confidante Vince Foster; not to mention Benghazi; the emails gone missing; the Clinton Foundation; and Bill Clinton’s pow-wow with then-Attorney-General Loretta Lynch on the tarmac of the Phoenix airport in the middle of an FBI investigation into Hillary Clinton’s emails. “We were just wanting to say hello and trade photos of our grandchildren” is how Bill explained it. It nearly cost Hillary the election right there and then, which the wags and amateur psychologists insisted was jealous Bill’s intention all along. He’s certainly not making his wife any friends with his swanning around the world as “first bloke,” schmoozing for the Clinton Foundation, now nominally run by Chelsea, gathering donations and giving speeches in places like Turkmenistan and Abu Dhabi, often bumping into his old pal Tony Blair on the circuit.

Ms. Clinton’s approval rating is hovering somewhere in the mid-to-low 20% range, among the lowest of the modern era, comparable to Truman’s at 22% in February of 1952 with the Korean War at hand, Nixon at 24% during Watergate, and George W. Bush in the aftermath of the Iraq War. All of President Clinton’s tentative initiatives – improving Obamacare, a Dream Act, a $15/hour minimum wage, filling the Supreme Court vacancy, forgiving college tuition debt–have been blocked by the Republican Congress, who, apart from re-litigating the email business, are now discussing impeachment hearings under the 25th Amendment of the Constitution. It’s unclear what the basis for impeachment might be; then again, it was unclear what the basis for Bill Clinton’s impeachment might have been, apart from him being a slime-ball and liar-face, by which standard most of those currently sitting members of the Republican Congress ought to be thrown out of office.

President Clinton’s challengers from the Left, specifically Bernie Sanders and Elizabeth Warren, both eminently unelectable in a national contest, are circling the badly bloodied Clinton like sharks, complaining about her and Bill’s Democratic National Committee shenanigans and her appointments of Goldman Sachs executives to high government posts. In the meantime, both are tirelessly fundraising for the 2020 election, in an unusual but not unheard-of campaign challenge to a sitting president of one’s own party. The Republicans are beside themselves with delight, eagerly anticipating, like ghouls at a weenie roast of cherubim, a total rout of the Democrats in the 2018 fall elections and an historic opportunity to Make America Great, really, really great, the way it used to be and deserves to be again.