A BRIEF HISTORY OF KYIV 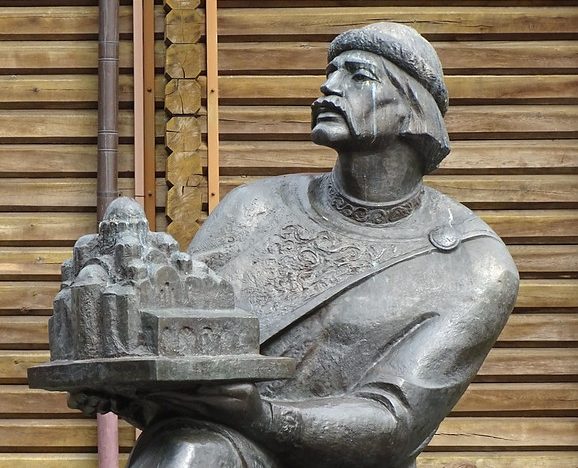 Yaruslav the Wise holds the city
in his hands. Its domes and alleys
constructed themselves in a dream
of how best to manage the hill
above the Dnipro. He has a Tatar face,
fur-trimmed hat, robes of an idealized
medieval knight-monarch; he appears
frescoed onto cathedral walls,
adorning currency. I pass him often
near the metro station at Golden Gate,
once the city’s utmost wall and refuge,
a structure he envisioned. What’s left
is 15th century, half a millennium after
his rule, and historically recreated:
brick and stone with log-framed lookout
towers from which today you can see
across one street named after him
to the Czarist-era apartments under
renovation and bill posters advertising
cell phone carriers, digital cameras,
Hollywood movies. Yaruslav’s model
city sits easily on a square tile, solid and
defensible, wide river flowing between
civilization and the eastern plain
the Huns had breached, thick wall high
above the west—but, grand-duke,
wresting the power from your brother
was only enough for one lifetime;
since then, a hundred incursions,
colonizers and tribulations. St. Michael
may throw down the wicked
but he does not protect. Indeed, the gates
are open, the wall is gone. Call for aid
on any of four dozen satellite options,
but the invaders have arrived.

Ann E. Michael lives in Pennsylvania’s Lehigh Valley. She currently directs the writing center at DeSales University. Her most recent collection of poems is Barefoot Girls; her next book, The Red Queen Hypothesis, will be published sometime in 2022 (Salmon Poetry). More info at https://annemichael.blog