This story was inspired by a Chinese news report. 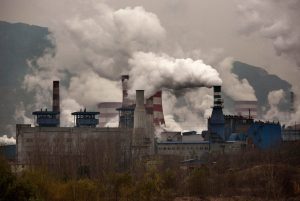 For decades, the town on the Yangtze River in southern China had been known for its two kinds of clouds. There were the black clouds billowing out of five big chimneys of a cement factory on the western side of the town and the white clouds spiraling out of an ancient temple on the eastern side. Last fall, the factory was shut down and black clouds no longer hovered. Since then, denser and bigger white clouds had risen from the Buddhist temple every day as more visitors came here to burn incense, pray, or attend memorial services.

In an end-unit apartment on the eastern edge of the town, a man was fast asleep. Suddenly, he heard a voice ringing in his ears. “You are worthless.” The sharp voice struck him awake. He tossed and turned in bed, removed the pillow, and then covered his ears with it, but it was in vain. Now he was wide awake.

He sat up in bed. He noticed a red circle on a calendar that hung crooked on the wall. Inside the circle was trapped a date. It was today’s date. He frowned and turned his head to the window. Then he caught sight of something not far away. It was a cloud shaped like a person standing upside down, its mouth wide open.

“You are worthless,” the voice echoed again in his mind.

“Lunatic,” he groaned. He tossed away the blanket, leapt out of the bed and then barefoot, paced the room.

He did not recall when and where he first heard the high-pitched voice, but every time he heard it, he was intensely humiliated, as if he were caught red-handed in a murder with the entire world watching him.

The man, in his late forties, was thin, quiet, average height, and hardly noticeable in a crowd. His pale face, covered with an unkempt beard, took on a frown whenever he was upset. And recently, he was often upset, but he kept all his frowns at home as he did not like to go out most of the time.

“Let’s chase the sun if the sun still rises/let’s chase the rainbow if there is still a sky/let’s chase our dream if we still have tomorrow.” He heard music rising from a speaker somewhere in the building. Even with all the windows shut, he could hear the lyrics of the popular song in his apartment all the way up on the tenth floor.

“You are so young and so pretty.” The man heard someone’s voice coming from the same direction of the music. “If you…” But the music grew louder, and the voice was submerged in a wave of the music, “Let’s chase the sun if the sun still rises/let’s chase the…”

“Lunatic,” he growled, hitting the wall with his fists. Bang! He felt a pain on his knuckles. For that, the man hated himself and the rock ‘n roll. He rushed to the window and noticed the upside down cloud was moving closer to him, and it appeared bigger. He thrust open the window. Several floors below him a girl in her early twenties was sitting on the top edge of a cement balcony, facing the street. She was looking down at her own sandals, which were dangling precariously in the air. She wore a black T-shirt with a big red question mark on the back. Next to her was a cellphone. The traffic on the street down below had stopped. A crowd looked up in the girl’s direction. Some were holding up their cell phones, recording the scene.

“Turn down the music.” The voice he heard earlier was coming from the girl’s apartment. “I only need five minutes. If you don’t like what I say, turn it up again, ok?”

The voice was soft; it was a woman’s voice. From his angle, he could not hear her clearly or see her at all.

After a brief pause, the girl slowly took up her cell phone and pressed a button; the music subsided.

The man frowned in disgust. He quickly shut the window and fell into a bamboo chair. In front of him, the upside down cloud person, still with the mouth wide open, was slowly shaking its head from side to side.

“You are worthless,” the sinister voice re-emerged. He jumped up, walked up and down the room, shaking his head from side to side involuntarily. “Lunatic.” He rolled his eyes in defiance.

“You have a whole future in front of you,” said the voice outside.

“You are too old now,” said the interior voice, like a judge announcing a final verdict.

“Imagine the beautiful things you have in your life,” the soft voice said.

“You are a loser,” the inner voice persisted.

The man collapsed in his bed, his heart beating fast. He reached out to his small wobbly bedside table for a glass, but several empty beer bottles were in the way. He pushed aside the obstacles, grasped the glass, but it slipped out of his wet fingers, fell to the floor, and broke into pieces. He kicked the shards with his bare feet and one piece cut open his left toe. “Damn.”

“You are worthless,” the voice came back, like a mischievous cat chasing a mouse. Now the two voices were spinning rapidly in his head.

Covering his ears with the hands, he lay huddled up on the floor, as if protecting himself from an imminent bomb explosion.

At this point, the loud music sounded soft and melodious to him. Now he saw the cloud, which turned darker and closer, was rolling its two hollow eyes and struggling to breathe, with its mouth wide open.

All at once he was washed over by revulsion and panic. He pulled up the white muslin curtain. He did it with such a force that he tore the fabric. He rolled his eyes, his lips moving up and down quickly, and a string of random words spurted out of his mouth. “Worthless, you, the sun, the rainbow, chase no tomorrow, you, the sun, damned.”

All the walls in the room were closing in on him; he was trembling with fear. “The sun, the sky, worthless, tomorrow, you, worthless, a loser.” He muttered, cringing in the corner. He opened his mouth, struggling to breathe. He felt he was being buried alive in a coffin. Escape! Run! Disappear! Now or never!

He jumped to his feet, pushed open the window, and climbed up to the sill. Standing on the edge, he saw the upside down cloud turn black, as black as the clouds from the factory chimneys he had swept for two decades. With a finger pointing at him, a scowl on its face, and its mouth gaping wide, it declared,

All at once, the two voices disappeared, but the music was rising in crescendo. “Let’s chase the dream if we still have tomorrow…” The man felt he was flying up and down through black clouds like a hawk clipping through a dark rising storm. He was relieved again. He felt that way on those good old days when he was being hung upside down, flying from chimney to chimney, sweeping and scrubbing each of them.

Now he remembered the person who spat out those words of daggers at him. It was his wife. It was about money. It had always been about money, those fights, tears, and accusations. He was not lazy, stupid, or worthless. He tried, first hopefully, and then desperately, time after time, again and again, until he was told he was too old to start over, until he was rejected for each job he applied to. Until he felt the world had forgotten him and he was the only one left behind…

The red circle on the calendar was a reminder of those utility bills, long overdue. Tonight their power would be cut off. They would, for a while, be living in darkness.

But hadn’t darkness started its reign last fall? Day by day, hour by hour, and second by second. The darkness ruled when his body refused to rise to face the morning sunlight; when his cell phone no longer rang with messages and calls from friends or relatives; when neighbors’ children ran away in fear at the sight of him; and when his Friday evening was no longer a Friday evening, but a last straw on the back of long and combative week bleeding into a longer and more combative weekend…

…When he walked into a grocery store with money in hand and did not remember why he was there.

He caught a passing glimpse of the woman who uttered those beautiful words to the girl on the balcony. It was his wife. Recently she worked overtime as an emergency security guard in the area. She was on call around the clock. He saw her standing upside down, shaking her head from side to side. He also saw the girl standing upside down on the top of the balcony, with her mouth wide open.

“Lunatic,” for the last time, he mumbled.