A Heartbreaking Lesson of Politics 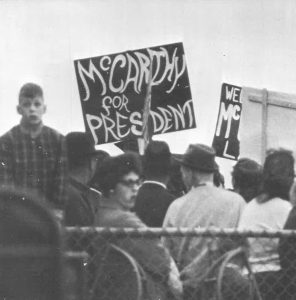 I first parted ways with my parents politically during a presidential primary race. I was eight.

The Republican candidate was Richard Milhous Nixon. My parents were staunch, active, pragmatic Democrats, and they were backing Lyndon Johnson in the Democratic primary. Once he withdrew from the race, they supported Hubert Humphrey.

But I fell in love with Eugene McCarthy. He was the anti-war candidate who spoke about peace like a poet, because, in fact, he was a senator as well as a poet. His campaign bumper stickers were shaped like flowers: white daisies with his name in white in the flower’s blue center, to be precise. I put a McCarthy flower sticker on the paisley cover of my three-ring binder and proudly carried it to school, talking him up to anyone and everyone who would listen. I loved him and believed in him with my whole tender young heart.

It was a tumultuous time with students protesting and rioting against the war while young men were shipped home from Vietnam in body bags. MLK was assassinated in cold blood; people mourned and raged, and our cities burned. And then Bobby Kennedy was murdered on the campaign trail. The world felt dangerous; so much hope was lost.

Protestors were beaten and arrested outside the Democratic Convention in Chicago, and I cried when McCarthy lost the nomination to Humphrey. I believed McCarthy was the only person who would end the war, stop the killing, and bring love back into the world.

I remember my mother comforting me, patting my back as I wept. But a few days later

she said, now you have to pick yourself up and support Hubert Humphrey, even though you do not love him, because he is a better man than Nixon. And so I did.

It was a lesson I never forgot.

Many young people stayed away from the polls, heartbroken and angry because Bobby and Martin were dead and Gene was defeated. In the end, Humphrey lost. Nixon became president. He was far worse than my mother feared. And yet, in comparison with Trump, he was a paragon of moderation and virtue.

So, folks, my eight-year-old self wants to remind us all that if the candidate we love is already gone from the race, or if the candidate we stand with now loses the Democratic nomination, we have the right to mourn—but then we have to pick ourselves up and support the winner. Because whether the Democratic nominee ends up being Biden or Sanders, he is surely a far better man and will be a better president than Trump. And as bad as Trump is, we have not seen the worst of him yet.