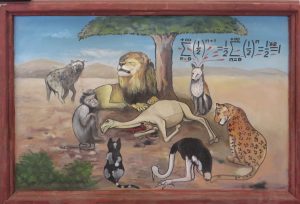 i: The Hunting Dog and the Watchdog

and Watchdog ate him right up

ii: The Frogs Who Wished for a King

into the pond with an open mouth

iii: The Animals and the Plague

the lion slaughtered the horse

iv: The Raven and the Swan

Come, Raven said Swan
brandishing her dappled neck
There is room for you in our water

there is nothing there for me to eat