—with respect to Victorine Meurent

At the Evergreen State College, I was a poser
who sat for a parody of Manet’s Olympia, my cat 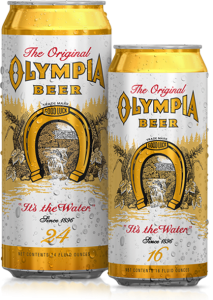 sitting by my feet as I reclined
in the nude, holding a can of Olympia
like a coat-of-arms above the family jewels. I preferred beer

labeled as nothing but BEER. BEER, beer,
we said, as if it hit you twice as hard
as a brand. Getting generic
means getting the thing itself. To name
limits. To be one

is not to be another. The model for Manet’s Olympia
was an artist we remember
as a naked prostitute, a painted lady
who sold the guise with her gaze, who unsettled viewers
as the person she was

vanished behind her eyes, as she became the courtesan
who would not blink
while staring you down, while looking in your eyes
like a goddess on the verge of demanding
who do you think you are. As

the subject becomes the artist
the poser becomes the picture. As the present
grows distant from the portrait of my undergraduate daze,
the good-hearted scoundrel I thought I was
fades in the light like paint.