In celebration of Scoundrel Time’s 5th anniversary, our editorial team is excited to announce the winners of our fifth annual Editors’ Choice Awards, selected from among the works we published in 2021. April Bernard’s “Allen v Farrow” is the award-winner in poetry.

April Bernard’s poem “Allen v Farrow” is that rare political poem that contains a forceful idea and an important uncertainty, that makes a quick response to a specific event and takes a wide angle look at that event. It’s a poem that sees what’s wrong and also makes us turn and look within ourselves to consider our own complicity. That is, it does what poems–and especially political poems–do best. 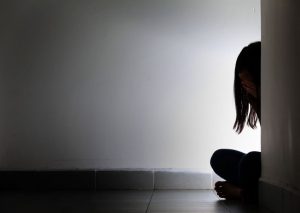 We don’t know
what we want or who we are
we don’t even agree we are we
In a civilized society, my friend says,
preface to: we do not hurt
children, we do not fuck children,
we define childhood,
of course we say we do, and
we know we mean we as in,
we adults who agree to follow rules
Almost no adult I know
follows all rules; look at that one
make an exception as she takes
a handicap space, or he makes
an exception for tax deductions,
or sorting his recyclables, or
fucking children
There must be rules
we say, but in some place,
in some other country, a father
sells his daughter, at 14,
and she has her menses
so she is not by definition a child
Throw your hands into the air
and say, in a civilized society,
this could not happen
but she is 14, she is a woman,
and respecting tradition,
even foul tradition, what
do you mean by civilized,
of course she is for sale
and will be fucked and that
may well be the least of it
14? 19? 8? sold? lured?
Look at this country, now,
look at him, and him, and him
Doesn’t money grant
the power to define civilized,
isn’t that what it’s for,
to make anything plausible

April Bernard is a poet, novelist, and essayist. Brawl & Jag is her fifth collection of poems, published by W.W. Norton; Miss Fuller is her most recent novel. Bernard is a regular contributor to The New York Review of Books and other journals. She is Professor of English and Director of Creative Writing at Skidmore College as well as a faculty member of the Bennington MFA Writing Seminars.