An Interview with Chaya Bhuvaneswar 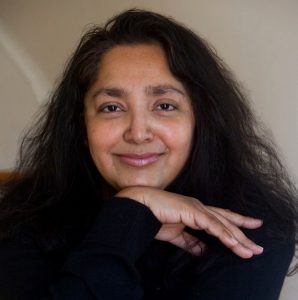 Chaya Bhuvaneswar’s debut short story collection White Dancing Elephants was praised by Laura Van Den Berg as “powerfully intelligent prose.” Lauren Groff calls her a “bold, smart, exciting new voice, well worth listening to.” Bhuvaneswar is a physician and writer, and her short stories center women of color and their diverse yearnings.  Bhuvaneswar has been awarded a Rhodes Scholarship, a Henfield Writing Award, and Dzanc Books’ 2017 Short Story Collection Prize. Her work has appeared in Narrative Magazine, Tin House, Michigan Quarterly Review, storySouth, and elsewhere. White Dancing Elephants struck me as a collection very much concerned with the space between fracture and wholeness, and in its stories Bhuvaneswar builds fully realized characters, who bump up against both each other in small and big ways as they navigate their worlds. It was a pleasure to read her work and interview her for Scoundrel Time. We are delighted that an excerpt from Bhuvaneswar’s novel-in -progress, First Gods, will appear in Scoundrel Time in October 2018.

EB: Family dynamics are complicated throughout these pieces, notably in “The Shaker Chair” and “Jagatishwaran,” in which characters are dependent on their families materially and emotionally but are separated or cast out from them through some form of trauma. How did you walk the tightrope of situating characters within their family units? What have these pieces revealed to you about the notion of family?

CB: There’s definitely a thread – applicable to “families” constructed by people working closely together, studying together, fighting for a country together – of how, in these scenes of familial intimacy, there is a unique potential for violence. I think it’s precisely the feeling of intense closeness that can make some people more irritable, sensitive, territorial, like animals snapping their jaws at each other. As a response sometimes my characters seek to find some peaceful form of purity, simplicity, away from the ‘messiness’ and unpredictability of family life – only to find themselves quite lonely, displaced. In this observation I feel like I have learned the most from the Russians, and from writers who scrutinize the process of becoming “elderly” and losing loved ones to death or indifference. Thinking about these dynamics always reminds me to be damn grateful for the chaos wrought by a kind of family love that probes, questions, gives, asks. Better than that the solitude of not having people who love you.

EB: This collection ranges from shorter stories to longer, multi-section stories. How do you know when a piece is the “right” structure and length? What is compelling to you about writing in the short story form?

CB: I do really like the idea, disseminated I think early on by Eudora Welty, that “a good short story should be able to be written out in an afternoon.” I like that at least theoretically, you can see the bones of the story you’re telling, and then you can go back and do whatever to whomever in it. It’s not particularly that I write that way – more like Maile Meloy describes, starting stories, then coming back to them even years later, or like ZZ Packer, “finding things on the computer,” i.e. it’s not so planned and organized. But definitely, I feel like there’s a way to go in and come back out of a short story, whereas novel revision – the entire structure stays in my head so much, I don’t want to leave, I want to stay in there. Perhaps that’s why Chris Adrian has said in a recent interview how much harder he finds it, while practicing medicine full time, to finish a novel versus finish several stories.

EB: As women of color writing fiction, our work is often reduced to its elements of identity. You compellingly weave this element into a host of other concerns—place, longing, language, among many others.  How do you push back against the expectation that our work be solely “about” racial identity while still maintaining such meaningful tension around how such identities inevitably inform characters’ lives?

CB: I think it’s great, first of all, that we’ve all become so conscious of the various pressures on us – including, unfortunately, a kind of weird commercial pressure about what “white readers expect” that turns out to have no relationship to the reality that actually, readers of all races respond imaginatively to work that is heartfelt, painstaking, crafted, passionate. Unfortunately I don’t really have a prescription for ‘pushing back’ except to persist in actually writing, claiming that quiet time and space that no one can encroach – and also, hopefully – by finding our voices within truly respectful communities – as I was so grateful to do recently in two recent events – one curated by the wonderful writer Jimin Han, whose novel A SMALL REVOLUTION is so accomplished and lovely; and the other curated by the brilliant activist bookseller and critic, and poet herself, Angela Maria Spring, a force to be reckoned with and convener of writers of color in literary ‘salons’ I am grateful to be part of.

EB: Your writing is dense with evocative language, rendering a world readers can feel present in from the opening sentence of each story. Since you work in both short- and long-form fiction, how do you see language functioning differently in short stories than in longer fiction?

CB: I think I’m still really nascent as a novelist and wouldn’t claim to really have a way to articulate how language functions in novels except to say that I love how a novel makes it possible to inhabit characters for so much longer and in more depth, and I do think it’s the driving force of lived lives, of characters being alive within novel-length books, that make novels still sell more than story collections, no matter what we do.

EB: You move through first-, third-, and even second-person points of view throughout the collection, sometimes even shifting points of view within a story in a way that re-positions your reader. How do you make decisions around who tells your stories and to whom they’re addressed?

CB: On one level, it’s so important to decide whom to ‘give’ the story to. On the other hand, some of the most fascinating stories and novels have evolved from telling the ‘same’ story from multiple perspectives and allowing more than one person to actually tell a story. I enjoyed playing with that in the story, “The Bang Bang”, which first appeared in Michigan Quarterly Review. I also like potentially shifting to a different POV within a longer short story as a novelistic technique that opens out the story, when it works. One way I think multiple perspectives can also contribute to even a very conventionally “single perspective” story is when the author introduces “factual” material (i.e. knowledge into the story of a specialized field, often through third person past or present). Coherence is important and that’s where the process of revision is so key. But I think above all we need to have fun when we write and constantly play, and I see POV as one aspect of fiction to play with thoughtfully, to consider, to deepen our understanding of events, wishes, ambitions.

EB: What writers have informed your approach to the short story? And what writers do you most enjoy reading?

CB: I have such a long list – some people, including my partner, have actually had to tell me to ‘quit it’ when I use my readings and promotional activities for my book to just give endless shout outs and praise songs to other writers. That said, there’s certainly a few I keep coming back to – Chekhov above all; Alice Munro; some of William Trevor and Mavis Gallant, but just as much John Edgar Wideman (check out ‘all stories are true’, so moving and yet meta-); David Foster Wallace (‘The Very Depressed Person’ is a real gem); Lauren Groff (her recent story about a woman doing research on a book who takes her young children to France with her one winter is JUST SO GOOD and so is the one about the panther in her latest collection); Don Lee (‘The Price of Eggs in China’ – I have to read that at least a few times a year, it’s just a need); and then I go through The Best American and O. Henry collections to expand my knowledge, to see what’s happening, to enjoy the story form. I also read lit mags, like Glimmer Train, where I first discovered probably my favorite story by Laura Van Den Berg, ‘Antarctica’, though all of them are brilliant and one from her first collection, also published by Dzanc, is being made into a movie starring Naomi Watts which is so fantastic. Annie Proulx of course. Years before the movie, ‘Brokeback Mountain’ – just that scene of Enis cursing, thereby expressing love, grief, rage at the loss of his true love Jack. She does so much with understatement (in the characters’ dialogue) and glorious, grand, omniscient description (when talking about the landscape and about the history of suffering most of her characters endure). And George Saunders. He is so inescapable, so relentless. I resisted for awhile but then ended up writing a story in my collection, “The Orphan Handler” in homage to his story about the raccoon killing ‘employee’ in the Tenth of December collection.

EB: What questions do you hope this collection is asking?

CB: How can we endure what we endure? How do we survive? What makes us so loveable and worthy of such intense and passionate loyalty, despite all of the wrong choices we make in life? I guess these were the main ‘questions’ I thought of in relation to my characters, though definitely not in an explicit way as I was writing, but only now, reading the book out in the world.