An Interview with Ethel Rohan

Ethel Rohan’s newest story collection, In the Event of Contact, is an examination of trauma and its aftermath, of loneliness and a failure to connect.

Rohan is an Irish writer living in San Francisco. She is the author of four short story collections, a memoir, and a novel, The Weight of Him. Rohan’s books explore the impact of a pain-filled past on the present. Much of her work deals in the difficult, but it is of the emotional, spiritual sort—the prose itself flows swift, clear and beautiful, with the musicality of her literary ancestors, and also with ripples of something completely her own.

In the Event of Contact is no exception to Rohan’s excellent body of work. Its fourteen stories are easy on the ear and hard on the heart, not to mention infused with a dark wit. “UNWANTED” tells the story of a Dublin teen that transforms himself into an awkward, unsolicited Sherlock Holmes. “F Is For Something” follows a Catholic priest who refuses to retire, though he’s starting to lose his mind. The collection’s title story follows three identical triplets, the subtext narrated by a pet cockatoo that can only say, “Toodaloo.” Rohan balances tragedy with just the right measure of comedy, preventing us from sinking under the weight. Her characters are imbued with the right volume of agency to avoid the powerlessness of victimhood.

These stories seem to ask, how does the past keep us from connecting to the present? If we fail to make contact, what’s at stake—not only for Contact’s characters, but for us, the readers, and our world? 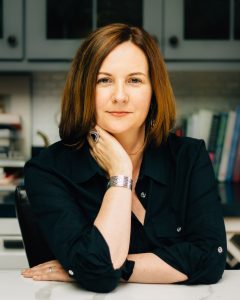 Alex Capdeville: At the risk of stamping the label “Irish writer” on your forehead, I can’t help but see a thread connecting your work to Irish writers of the past. Your wry humor, smooth, swift prose, and existential themes bring to mind writers like Flann O’Brien and Beckett. Could you say something about your influences?

Ethel Rohan: I’ve never thought of O’Brien or Beckett as influences, but I do appreciate the strangeness in their work, the loaded omissions, and their concern with life’s cruelties. I’m much more conscious of such male Irish author influences as William Trevor and Donal Ryan, and Joyce’s Dubliners. But mostly I’m inspired by such luminaries as Flannery O’Connor, Elizabeth Strout, Yiyun Li, Edna O’Brien, and Toni Morrison.

The mantle of “Irish writer” is indeed weighty—from such a small island, what a burgeoning crop of greats, of which I’m endlessly proud and grateful—but I enter every project less concerned with the various threads from which I’m woven and fully intent on telling the best story I can.

AC: These stories put the reader in a dangerous place, exposed and vulnerable to deep emotional responses. But at the same time, I never feel alone on this journey. The characters’ discoveries are my discoveries. You create a wonderful connection in the midst of solitude and desperation. It’s like being thrown out of an airplane strapped to a skydiving coach. How did you pull this off?

ER: Laughs. “Being thrown out of a plane…” You flatter me. That’s an interesting analogy. I imagine most people jump from a plane to feel the extreme emotions of exhilaration and terror, and to defy fear, falling, and death. We’re each in search of aliveness in all its varied and often ironic forms e.g. inanimate books bring us entire lives and worlds we can vicariously experience and exist within. As for how I might be like that skydiving coach? My hope is that from the outset I make my contract with readers clear: I’ve got you.

AC: The way you write about silence and shame is truly moving. I’m thinking particularly of Everywhere She Went, and the title story In the Event of Contact. Both deal with female characters living through devastating trauma, the effects of which have fractured them. With movements such as #MeToo, we are living in a time of necessary and painful awakening. Can you speak to the role of books in upsetting power and breaking silence? How does fiction feed social movements, and vice versa?

ER: I’ve lived silence and shame. I don’t know any woman or marginalized person who hasn’t, in one form or another. Stories, personal and fictionalized, give us our voice and control of the narrative. As a girl and young adult trauma robbed me of my sense of value, of mattering, of having a say. I didn’t know I could say No. Say Fuck you. I didn’t even know there was that power within me to claim, not until it was too late. Movements like #MeToo are sending that empowered message far and wide and loud: Girls and women don’t have to take patriarchy’s, anyone’s, oppression. We have a roar.

AC: There is a lot of loneliness in these stories. Before Storms Had Names centers around a teenager boy trapped in an impossible situation. He longs to love, but the woman he falls for is almost absurdly inaccessible. This enrages him, and the story culminates in a fantasized rape. Yet at no point is the male character reprehensible. He is profoundly lonely. What part does loneliness play in the toxic patriotism and rampant conspiracy theories we see today?

ER: There’s loneliness, and then there’s the rising ‘Me First’ plague that’s rampant in America, and growing in other nations, too. The lonely long for connection. Those suffering with individualism want capitalism above all else. The thing is, everyone needs connection. Without it, we wither. Thus capitalists are doomed. For the lonely, there’s hope.

AC: I loved what you did in F Is For Something. Father Quinlan’s mind is disintegrating from dementia. He wanders in agony, looking for ways to be useful in order to avoid a forced retirement by Bishop Clemens. The story is tragic and touching, but I can’t help but see Father Quinlan as an analog to the Church in toto, repackaging old ideas and doting around looking for ways to remain relevant in a society whose needs and values have moved light years away from most parts of the Catholic faith. Do you see a useful role for the Church in our world?

ER: The Catholic Church is a for-profit business that has shown no true atonement for its past atrocities, like its rampant pedophilia, and scapegoating and exploitation of the poor, unmarried mothers, ‘promiscuous’ women, and ‘illegitimate’ children. I think we need to tear it all down and start over. But that’s never going to happen. Meanwhile, don’t throw out God or spiritualism. I’m a firm believer in higher powers. I also have empathy for those Catholic priests and nuns with true faith and intentions who dedicated their lives to serving God and their communities. Now that the curtain has been pulled back ever farther, it’s got to be devastating. 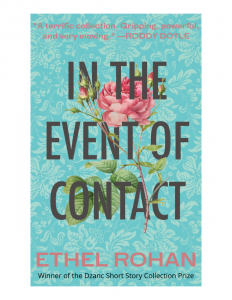 AC: I imagine that In the Event of Contact was not an easy book to write, psychically. What inspires you to take on such a task? From where do you draw your strength?

ER: The stories, characters, and plots take me on. At least that’s how it seems. Sometimes I draw strength from anger, but mostly from love.

AC: What are you reading now? What writers inspire you at this moment?

ER: I’m on an excellent memoir streak right now: David Tromblay’s As You Were, Gabriel Byrne’s Walking With Ghosts, Jennifer Berney’s The Other Mothers, and Jeannine Ouellette’s The Part That Burns. I’m finishing Katherine Seligman’s debut novel At The Edge of the Haight, and am excited to read several other novels: Ron Nyren’s The Book of Lost Light, Nuala O’Connor’s Nora, and Julia Fine’s The Upstairs House.

In the Event of Contact, winner of the 2019 Dzanc Books Short Story Collection Prize, is forthcoming in May 2021. Ethel Rohan is also the author of the short story collections Goodnight Nobody and Cut Through the Bone, the linked collection of very short stories Hard to Say (editor, Roxane Gay), and an e-memoir entitled Out of Dublin. Her debut novel The Weight of Him won the Northern California Publishers and Authors’ Award, a Plumeri Fellowship, and the Silver Nautilus Award. Her work has appeared in The Washington Post, The Irish Times, PEN America, GUERNICA, The New York Times, Tin House and others. Rohan emigrated from Dublin at the age of 22, and settled in San Francisco where she still lives today.

Alex Capdeville is a fiction writer and California native who has been living in Paris for the past fourteen years. He has worked as a translator, English teacher, and now earns a living as a carpenter and set builder for French television. He spends his time reading, writing, and cleaning up after his four-year-old daughter. This interview is his first published work.