An Interview with Johannes Lichtman 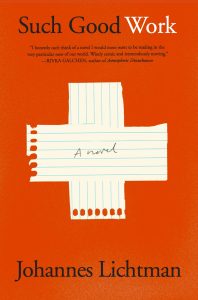 Johannes Lichtman’s beautiful first novel, Such Good Work, follows a protagonist named Jonas, a Swedish-American dual national who leaves America for graduate school in Sweden, hoping to find a measure of sobriety and some kind of workable direction in life. When he starts tutoring Afghan refugees after school, the novel takes a political turn, posing big, ambitious questions about the relationship between self-discovery and human connection, and the possibility of doing good in a complex world. The effect is deeply heartfelt and terrifically funny all at once.

Lichtman’s comic exploration of the intertwining of the political and the personal feels particularly important right now, and has garnered significant attention. The New York Times Book Review calls him “a writer who is willing to openly contradict himself, to stand corrected, to honor both men and women, to ask sincere questions and let them ring unanswered.” The New Yorker adds, “Such Good Work [is] alive to the contradictions between morality and comfort that exist everywhere under global structures of capitalism and politics.”

Lichtman was born in Stockholm and raised in California. His work has appeared or is forthcoming in The Sun, Tin House, Los Angeles Review of Books, LitHub, and elsewhere. He lives in Portland and Ukraine. Such Good Work is his first novel. He can be found at johanneslichtman.com. 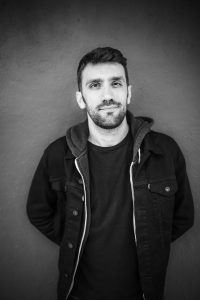 Robert Anthony Siegel: America is a fractious and angry place right now, which makes Such Good Work feel timely, with its deft exploration of the dangers of self-enclosure and the difficulties of human connection. By the end, the novel feels surprisingly optimistic, with an emphasis on small interpersonal successes—on listening, in particular. Do you share that optimism? And what are the implications for a country like the U.S., with such deep political and cultural divides?

Yet since our current president was elected, I’ve caught myself longing not just for the Obama years, but also for the Bush years—somehow forgetting that Bush was a terrible president who started two wars, mainstreamed torture, and gave us the Patriot Act. If I can’t trust myself to accurately remember the past unless I really make a concerted effort (which, most of the time, I’m not going to do), I probably have to think of myself as an unreliable narrator of the present. I certainly feel like things are getting worse—that we’re becoming more unable to listen to each other. But I don’t know if that’s actually the case. As for the implications, if the 2016 election taught me anything, it’s that I shouldn’t try to predict the future.

RAS: Do you see a political role for the writer? Can fiction engage with politics and issues of social justice, without falling into didacticism or ideology?

JL: Absolutely. As a great professor of mine was fond of saying: A novel is like a bag—you can put anything you want in there.

At least at present, I believe more in the political power of literature to reveal to us the hypocrisy within our own ideologies than I believe in its power to convert. There’s not a book in the world that could make me think about voting Republican. But to cite just one recent example, Valeria Luiselli’s Tell Me How It Ends revealed to me my sizeable blind spot to the problems with American migration policy in 2015 (the same period that I was writing about Swedish migration policy in my novel), when the Obama administration oversaw the deportations of unaccompanied minor refugees from Latin America. Obama is my favorite president of my lifetime, and I have no doubt that I allowed that blind spot to form because this information didn’t fit into my narrative.

Last year I talked to a Swedish writer friend who mentioned that when she read Swedish books, she often felt like she could see where the writer had tried to force a political point in. Which can be a real drag. Conversely, it’s easy to find the gaping holes where American writers have taken creative detours to avoid politics. (Though this has probably changed a bit over the last couple years.) Which can also be a drag.

From the American perspective, I don’t think it’s so strange that we tend to keep politics out of literature more than most countries, given our history. In Eric Bennett’s study of the history of the MFA program in the US, Workshops of Empire, Bennett showed how the American government in the twentieth century made a concerted effort to fund a style of teaching creative writing that values style over content. This ideology suggests that the focus should be on the sentence as vehicle for image and flow, rather than on the story as a vehicle for ideas. The idea was to encourage a value system that would keep the communist and anarchist ideology spreading across Europe from infiltrating American

Which is certainly not to discount the MFA program or the writing workshop; I loved my time in the MFA, where I gained many of the tools that would later help me write the things I wanted to write. But given that so many American writers have at some point been affiliated with a writing program—either as a student, teacher, or both—and given that America is almost singular in its belief that politics and literature can be separate, it’s hard to argue that this government-funded chapter of our past has no effect on our present.

Sweden is a small country with a pretty high rate of people who read for pleasure, which means there can still be heated debates about novels in the arts sections of newspapers. I would imagine that encourages the writing of political fiction. It also seems that the writing and publishing cycle in Sweden is a lot shorter than the US. I would guess that this is not only for logistic reasons—America has over thirty times more people than Sweden—but also for monetary ones: when your potential first-language audience is only ten million people, the average book is probably going to make less money. Regardless of why it is that way, when you write faster and go to press faster, it’s easier to be part of the zeitgeist.

RAS: Your protagonist, Jonas, is struggling to stay sober when he ends up volunteering to teach young Afghan refugees. Part of the beauty of the novel is the way it contrasts Jonas’s fragility with that of the boys he teaches—he’s as lost as they are, even with all his first-world privilege. How did the current refugee crisis enter your plans for the novel, and how did you research it? Did your research change your thinking about Jonas?

JL: In September of 2015, when I was living in Malmö, the initial outpouring of support towards migrants started in Sweden (and with it, some of the hypocrisy that accompanied that still-remarkably-positive outpouring), and I found myself thinking a lot about the situation. Like the protagonist in the novel, I began volunteering to help teach Swedish to unaccompanied minors, mainly young men from Afghanistan. Initially, I had no intention to write about the experience of volunteering. It felt wrong to do so, given that the boys I was working with weren’t there to give me material for my fiction—they were there to learn Swedish. And the power imbalance in that situation was staggering. At the same time, I became so preoccupied with the experience that I found it hard to think about anything else.

My solution was to just stop writing for a while. Which is not to say that I was using my newfound free time helping people—I spent that time ruminating. An activity that’s not particularly helpful to anyone.

Eventually it became apparent that I have the spinal fortitude of a wishbone, as I began to write about volunteering after all. I made sure to use composites, not to reveal anything personal any one person had told me, and to make the fictional parts as believable as possible based on what little I did know—which felt especially important not to screw up, given how fraught representation is when you’re writing about characters from a country as underrepresented in literature as Afghanistan is in America. But I don’t know if the decision to write about that experience was a moral one. It may not have been. I certainly have my doubts.

RAS: The world refugee crisis threatens to become a permanent fixture of life on this planet. Who are some other writers on the refugee experience that everyone should be reading right now?

JL: It’s hard to say what qualifies as fitting under that umbrella, but some writers that have really affected the way I think about migration and borders in the last few years include: the aforementioned Valeria Luiselli, Aleksandar Hemon, Omar El Akkad, the essays of Laila Lalami and Rabih Alammedine, Hassan Blasim, Viet Thanh Nguyen, Milan Kundera, and Ryszard Kapuscinski. Freeman’s biannual regularly also publishes a lot of the best writers on the topic, so I try to pick up an issue whenever I’m in the US. That said, I can only read in English and Swedish and am only looking at books written in or translated to those languages—so take my list with a grain of salt.

A lot of my understanding of these topics has also been influenced by journalism and activism—both print and video. My thinking is constantly affected by the Facebook feed of the Swedish group Ensamkommandes Förbund, the remarkable association for unaccompanied minor refugees started in Malmö some years ago by Omid Mahmoudi. I watched a video the other day linked from that feed, which was just three minutes of interviews with young women who came to Sweden in 2015. That video probably had more emotional effect on me than any book I’ve read on the topic in a long time.

RAS: I know that you are working on a new project, a biography of the Swedish writer Stig Dagerman, who also wrestled with refugee issues after World War II. Can you tell us about this project?

JL: Stig Dagerman was the great enigma of twentieth century Scandinavian literature. He debuted at twenty-one in 1945, published ten full length works in four years, then fell into five years of writer’s block, after which he killed himself. Before his death, he produced some of the most enduring works of literary empathy about the refugee experience, including the stunning nonfiction book German Autumn (available in a really good English translation by Robin Fulton MacPherson).

The book I’ve been working on is also about my own struggle to figure out what is and isn’t okay to write about—what you can and can’t use in the name of art. In Dagerman’s relationships with his family members (including his first wife, who was a German refugee) and his use of their lives in his fiction, things got very, very, almost unimaginably, complicated. The reason I wanted to write about Dagerman is not only because he’s one of the great Swedish writers of the modern era, but also because his life poses super hard-to-answer questions about the ethics of writing about real people.