An Interview with Roxana Robinson 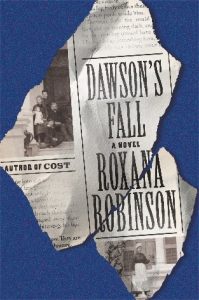 Roxana Robinson’s sixth novel, Dawson’s Fall, is based on the lives of her great-grandparents, Francis and Sarah Dawson, members of Charleston, South Carolina’s affluent white elite in the years during and after the Civil War. Drawing on an extraordinary trove of real letters and diaries, the novel draws an intimate portrait of a family—cosmopolitan, principled, yet very much of their time and place—struggling to make sense of a shifting social and political landscape. In simple, swift prose, Robinson depicts the horrific waste of the war and the brief opportunity for change that came afterward with Reconstruction, only to end in the system of repressive racial laws known as Jim Crow.

Roxana Robinson is the author of ten books: six novels; three collections of short stories; and the biography Georgia O’Keeffe: A Life. Her work has appeared in The New Yorker, The Atlantic, Harper’s Magazine, The New York Times, The Washington Post, BookForum, Best American Short Stories, Tin House and elsewhere. She has received fellowships from the NEA and the Guggenheim Foundation. 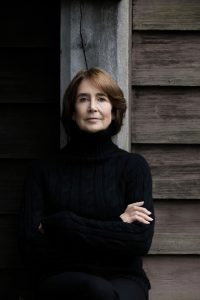 Robert Anthony Siegel: Dawson’s Fall is based on the dramatic lives of your great-grandparents, Francis and Sarah Dawson, white Southerners who lived through the Civil War and Reconstruction. What made this feel like the right moment for their story? Did it have something to do with the ongoing national conversation on race? Or was the timing more personal?

Roxana Robinson: I usually know exactly when and why I start a book, but in this case, I don’t know when I began to turn my attention to this story. I had deliberately ignored the subject for a number of years. I owned some family papers, and Dawson scholars had sent me others. I knew that a large archive existed at Duke and the subject seemed too big and too burdensome to take on – until suddenly it was not. At first, I wanted just to understand my family, but as I learned more about that time and place I came to understand that I was exploring much more than my family history. I was learning about large American issues – slavery and violence – through these characters. The subject became compelling, and seemed important. These issues were also part of my own path as a writer. I had written before on the subject of moral consequences: the consequences of divorce, of our treatment of the environment, of our behavior within the family, of war, and our treatment of soldiers. So that to write about the moral consequences of slavery was part of this exploration of our national conscience. The book took me five years to write, and with each year the subject seemed – sadly – more timely.

RAS: Francis Dawson is a complex figure, particularly in his public role as owner and editor of the Charleston News and Observer. He believes in the rule of law and equal protections for freed men, yet also holds many of the racial prejudices of the era. He is a reasonable man, but his sheer reasonableness seems to land him on the wrong side of the issue at important junctures. How do you interpret him?

RR: Dawson became increasingly interesting to me because of his complexity. From this vantage point – 2019 – it seems clear that he has a formidable blind spot about race. How can he believe so firmly that freedmen should be given their rights, and also hold views that seem frankly racist? But when I thought of categorizing him in that way, I thought of the choices we make today, and I wondered how people will see us in the future. How can we not realize that we are destroying the environment? How can we allow it to continue? These big issues may seem simple from a distance, and it’s very easy to feel smug. But when you examine the problem from close up the subject becomes complicated, and hard to disentangle. We are all caught up in webs of practice and obligation that make pure idealism hard to maintain. If you live in a culture that’s firmly based on a set of beliefs, it’s hard to challenge all those beliefs all of the time. It would be particularly hard if you had chosen to emigrate to it, and had invested a great deal of energy in the place. Dawson had made the journey to America in a kind of petri dish, a floating island full of Confederate believers. Those young sailors, whose friend he was so eager to become, were his tutors, they were his introduction to his new land. They believed in the inequality of the races, and they taught Dawson to believe in it as well. He had no experience of his own with which to challenge their teachings. When he arrived in America he’d accepted their beliefs. So, it was interesting – and impressive – that he maintained his own principles in spite of some of theirs, and maintained them with such determination. He challenged some of their beliefs, but accepted some. It seemed to me that we all do things like this. We all have blind spots. From this vantage point it’s frustrating to watch him, but it’s also humbling, because we’ll be seen in the same way – flawed, ignorant, maddeningly wrong – by future observers.

RAS: What do you think of Francis Dawson’s political legacy? Is there a public figure right now that you might compare him to?

RR: I think his legacy is distinguished but flawed, like most. He was honorable, public-spirited, powerful and principled. In many ways, he was a force for good, and for that I admire him. But like many idealists, he was reluctant to compromise. He truly couldn’t believe that others didn’t see the world as he did, and his intransigence made him less effective as time went on.

RAS: Let me expand on that question: do you see connections between the tumultuous and angry time in which Dawson lived—Reconstruction—and our own time?

RR: I do see connections between our two times, but let me add the period of Redemption to that of Reconstruction. Reconstruction took place in the first decade after the war, when the Federal rules about freedmen’s voting still applied. Redemption took place in the next decade, when the Northern troops finally left, and white supremacy exploded. The voting rules were flouted, and white supremacists did everything they could to suppress black votes and black citizens’ rights. Sadly, there are parallels to this today. We are now seeing a distressing rise in blatant racism, a rise in overt attempts to suppress the black vote, a rise in KKK activity, and an increase in violence toward the African-American community.

RAS: As I read it, Dawson’s Fall links the American culture of violence with the legacy of slavery, the institutions of threat and control that it required. Can you expand on that? Do you believe that legacy continues today? And do you see a way out for us?

RR: I think violence is the legacy of slavery. Slavery can’t exist without violence, and, not surprisingly, the slave-owning states have a history of far greater violence than the northern ones. The rise of the white militias engendered the first dissension over the Second Amendment. Clearly that rule meant that citizens could form militias in order to protect the national security, which in this country has meant the founding of the national armed forces. The Founders never intended that armed civilians should strike terror into the community. But the white vigilantes wanted to use guns to strike terror into black voters, and claimed their right to do so under that amendment. Today the right to bear arms has come to include automatic weapons, military weapons and concealed weapons. Guns make violence easy and likely, and we now have nearly 40,000 gun-related deaths each year, more per capita than any other developed country. The rest of the world is baffled by our addiction to death-dealing weapons, but this addiction is derived from the culture of violence that was the foundation of slavery. Violence as a means of conflict-resolution, as a way to impose political force, as a means of declaring power and privilege are all related to slavery. That legacy, engendered by white supremacists, continues today. Almost no other developed country allows automatic weapons, hand-guns, concealed hand-guns or un-registered gun ownership. We demonstrate through our actions that we hold human life cheap. We allow the individual’s rights to supersede those of the nation in respect to public safety.

RAS: As a magazine, Scoundrel Time is focused on the connection between politics and art. Do you see a political role for yourself as a writer? What is the writer’s responsibility to her times?

RR: I think every writer has a political role, whether or not she accepts it. The task of the writer is to bear witness, to record how it is to be alive, at this moment. Each writer decides what she will notice, and what seems most important about this moment.  For me, the way humans respond to each other is of central importance, and that response is the essence of politics. We all exist in the context of the larger world, and we each decide on our responsibility to our country, to our neighbors, to the planet. Whatever I write is influenced by what’s going on around me; I think that’s true of us all. Flaubert didn’t intend to write a political novel, and yet the politics of his time are revealed in Madame Bovary. So, it is for all of us: if we are conscientious observers, if we set down exactly what we see, we will bear true witness to our times.