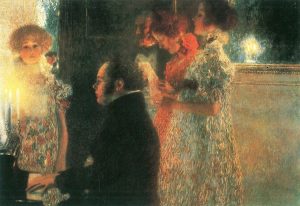 Here’s Schubert at 17,
short and thick, nickname Schwämmerl, “little mushroom,” deep in his cups
at the Hunter’s Horn,

a dingy beer hall in Vienna, with the after-opera crowd,
poetasters and brainy
pundits shilling vitriol—bullshitters, all of them. They’re pitching

buzzard-like to judgment
of Gluck’s Iphigenia in Tauris, for a cheap-seat ticket to which
the kid had hocked

his schoolbooks. They’re disparaging the baritone Vogl,
whose Orestes had Schubert
only hours ago weeping into his frayed collar

those ugly early
nineteenth-century tears. In a moment our mushroom will be up
on his feet, moving to slug

the stupid out of these imposters, but in rising he’ll catch a chair leg
or sausage skin, slip
on some spilled beer, and fall. And the whole bar

will double over then,
razzing both him and Vogl together—the great question
of art now is how

not to be Romantic, yes, but what’s moving in me tonight
with less purchase
than even a wish, is a white whalebone comb
though your wet hair

Matthew Kilbane lives in Ithaca, New York, where he teaches writing and literature at Cornell University.