Another Year Older and Deeper in Debt 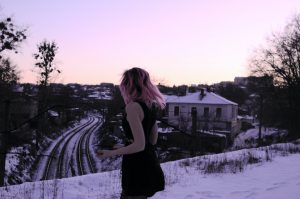 Say I tell you a story about a girl who’s afraid of money. From a young age, she learned that there didn’t seem to be much of it and that hard work didn’t mean one would ever have much of it. She knew this from her dad’s dark tan in the summer that came from working twelve-hour days in the sun, laying mulch and planting flowers in the big, bright lawns of those with houses the size of her entire apartment complex. She knew this from her mom waking up early to go to an office job, and then going to work at an Italian restaurant rather than coming home, so that “after work” only meant the time it took her to get from the first job to the second one.

Say she asks for a fake checkbook for her eighth birthday and asks her mom to teach her how to balance it. She loves to practice her signature, the feeling of the thin paper on the side of her pinky as she writes. She loves to imagine buying things of her own someday—a bicycle, an old VW Bug, a small blue house—someday when she has more money than her parents.

By the time she’s a teenager, she hasn’t learned much more than this: how to sign checks and never let the balance go below zero. She spends the money from her first babysitting jobs on thrift store clothes, fast food, CDs. Eventually, she must buy gas for her dad’s truck when she borrows it to get to and from her after-school job. She works at a pizza shop now, side by side with almost all older boys and men twice her age.

Say this girl starts out making only $5.25 an hour, and by the time she applies to college, her dad has left. She has only a couple hundred dollars to her name and now relies on the men at work who like her, the men who will give her rides to and from home. For a few dollars here and there, she burns CDs full of music for these men—metal and old rock, the kind of stuff that bores her—because she knows how to steal from the internet. One of these men takes an interest in her. He’s broad-shouldered with bright red hair and a kind smile. He’s the one who will drive her home most often, late at night, when her mom has already gone to bed so she can get up for work before the sun.

Sometimes this girl goes on pizza deliveries with this man in his truck and they talk, joke, laugh. She feels seen by him more than anyone else. Often in the dark, in front of her parents’ house, he looks at her for too long, then asks if he can give her a hug before she leaves him. She hesitates, then says yes. When he holds her, she feels comforted but also scared. She can feel he’s getting something from this moment that she can’t quite understand, and she’s never completely sure if she’s safe. When she pulls away from him, she goes inside, takes a shower, sleeps for less than a handful of hours before she goes to school. She tells herself, Everything is fine. She tells herself, I am safe.

Say she graduates high school with honors. She gets to wear a blue sash and silver cords around her neck at graduation, but her gown is wrinkled. She didn’t realize she would have to iron it until it was much too late, and there was no one around to remind her. There will also be no one to take her on visits to the colleges where her high school advisers told her to apply. Everyone must work. So she picks the school thirty minutes away. She can get there, and in the city, she doesn’t need a car. With small scholarships and grants, it’s the cheapest option. The dorms, the campus, the classrooms are her only escape plan: from minimum wage, from the men at work, from every evening spent next to an oven.

Say some days on campus this girl feels nothing but a bell jar of guilt around her head as she walks across the commons, although she’s uncertain why. She feels that maybe she doesn’t belong here, on this campus, in these classes, with so many kids who seem unlike her and who have money to spend on books, on beer, on tuition.

In every classroom, she sits close to the wall, stays quiet, and looks up all the words she doesn’t know, when no one is paying attention: ostensible, extrapolate, pernicious, renege. How does one “unpack” a thought? she wonders.

Later, when she wants to drop out, she realizes how much debt she’s in and stares at her ledger for days in disbelief. How could a sum go so far below zero? So much debt in only two years, she can never pay it back with pizza shop money or old man CD money. She thinks of the cold pizza dough in her hands. Of the long, secret hugs in that man’s truck. And she learns to pretend to know and to have more than she does.

Tell me what you expect for her. Tell me how you think her story ends.