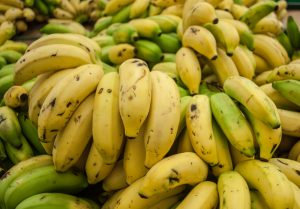 Mike checked the gauges, and the buncher hissed like it was satisfied with a cruel new law it had just made up.

“What would you do out there anyway?” Mike shouted over the earplugs. He motioned at the window half hidden by the fender of the machine. The only window on our floor. I stand all day with my back to it. Out the window and down, traffic moves on the highway under the only sky that has ever been.

“Look for something else, I guess,” I shouted back.

Once they knew you wouldn’t amount to much, they would say it exactly like this: “Well (pause), you can always get on at the banana factory.” It was true. You could. Anyone could.

Entry level is bunching. Everyone starts in bunching. Mike started in bunching and he’s the shift supervisor now but still works shifts on the line. The ruse of achievement. Given enough vanity, any deal can look fair.

The conveyor runs at 77 rpm. Keep your hands out of the sprockets. You scoop the loose bananas and, with a move they taught us in a training video, “huddle” them to the buncher head. The flower-petaled crimper fuses the bunch, then you toss the completed rig back on the line running toward banding and eventually stickering. Stickering is where you want to be.

In the interview the only question I had trouble with was, “What makes you passionate about the banana manufacturing industry?” I didn’t know it was possible to be passionate about bananas. Or industry. I don’t remember what I said.

When it was over, the interviewer gave us a tour through the impossible noise of the factory floor. His eyes darted around like he was wired up with ferret veins. He was from HR and wore a spotless white hard hat and a green safety vest over his suit. I guess the higher you go, the more uniforms you have to wear.

But after all, they were right. You can get a job at the banana factory. Anyone can.

They’ve only stopped the line once. McCarthy in loading got his hand caught in the separator (which, it turns out, is aptly named), and they had to helicopter the part of him that was still put together to the next town over. His hand rode the line like it was playing a jazzy piano chord from injection, then through the wash station, past sorting, weight, and stickering. It made it all the way to color mixing before someone noticed his body lying halfway across the separator, spraying blood like a horror movie and kicking his feet. They pulled him out of the drive chains and wrapped his stump from the roll of cellophane printed Made in Honduras. McCarthy’s eyebrows are so blond, if he had been born by the river in La Lima, he still wouldn’t qualify as Honduran, and he’ll never pay off that helicopter ride.

Lunch at Irene’s with Mike. I usually eat in the breakroom, but Jeff always eats in the breakroom. Same sandwich every day. Sitting with his red hair, red face, red breath, red dreams. One of his kids died, so he’s the way a person who lost a kid is all the time. How his fingers pick up the soda can. The way he holds his eyes. Valorizing his mourning. His kid drowned like kids are always drowning. Or getting hit by cars. Falling down wells. Drying up from leukemia and blowing away. It’s a wonder we’re still here.

Lunch at Irene’s means lunch beers at Irene’s. There is no sweeter sin, no more noble and proud middle finger to the boss than lunch beers. The fat cats with their three-martini lunches aren’t doing the same thing. Those pot-bellied, Italian-suited captains of the world don’t realize how their status has robbed them. It’s the prohibition that makes the beer cold. The taste of taboo is bitter, gold, and delicious. You can’t buy it with money.

“You ready for this?” Mike said.

The beer warmed my soul. The beer pushed the banana factory many calendar flips away. Made it something vague to be considered later.

Mike reached into his jacket and brought out an envelope. Slid it across the table. J. PETERSON stamped in red. Company inter-office red.

Time existed before I opened it, I’m sure of it. And in that time, I believed shell shock and PTSD were a scam. The same as holding your neck after a fender-bender. A little innocent theater. The sly wink that propped up the whole industry of personal injury law. But after I opened it, I believed so much, I felt I had found a religion.

“I was in Peterson’s office, taking a write-up. Dumb shit went to take a piss and left his desk unlocked,” Mike said, guzzling his beer.

Mike had stolen the most unbelievably valuable and hilarious treasure in the banana factory. The most dangerous and guarded property in the whole fruit manufacturing industry. He had managed to get his hands—our hands, the hands that actually do the work—on the keys to the kingdom. Mike had stolen the filler codes.

Without getting too technical, the codes control the mixture. The mixture determines whether your banana is mealy and soft or firm and delicious. They control how quickly those brown spots form on the skin and how many of those hairy strings you find when you peel one, but most importantly they control the material matrix. The matrix is dispensed by a machine that operates deep down on the elemental level. Down in the proteins. I don’t really understand it, but with the right mixture of elements, you can fill a banana with absolutely anything. And now we can fill four to six million bananas a day with absolutely anything we like.

Behind packaging there’s a catwalk that leads to the emergency stairwell and dumps out on the loading dock. Mike and I sneak down there to smoke. There is a 100 percent no-smoking policy at the banana factory. They devoted a full day to it in training. The hazardous material permit forbids it. No one knows that the bananas they lovingly slice atop their kid’s breakfast cereal are made and assembled in an industrial factory that has a hazmat permit from the state.

Mike lit his cigarette and drew deeply. Exhaling smoke into the exhaust vent that will still be running when the sun burns out.

“Yeah. Kind of an asshole.”

“Figures,” I said, “only assholes get promoted.”

The trucks coming in and out. Forklifts twirling, the onion smell of work gloves. Men whistling over the din to communicate like pre-verbal cavemen. Everything never still. For all our gifts, the best humanity can do is motorize everything. I know what they’ll be thinking when someday they find the last patch of unpaved earth.

Mike drew on his cigarette, blew into the vent. With a sigh he said, “I was bullshitting about Anderson. He didn’t get promoted.” His words formed by smoke, he said, “I killed him.”

“Oh, Jesus, okay,” I said. The crows were laughing and picking at the reject stems overflowing in the dumpster.

“I’m serious. You want to see him? He’s upstairs.”

I had never heard Mike raise his voice, and not believing him at all, I said, “Sure.”

It was as if the offices upstairs were built on the moon. No sound from the factory came through. So quiet Superman couldn’t see through the walls. Down the hall the offices were brown-carpeted and empty. As we passed, each one was more deserted than the last. I wondered where the office people had gone. If they came in at all. If they even existed. Office after office dark except for that weird slanted light that comes through shut mini blinds.

“Okay,” I said, “let’s go see a spooky dead body.” I laughed at a volume appropriate for a quiet hallway. Countless hours on the concrete factory floor made the padded carpet a kind of treat. Like my feet were skipping school.

When he opened the door, I fully expected to find my name in black marker across a giant blow-up penis sitting behind the desk, huge and pink. Or if Mike had gotten really creative, a printed-out picture of my face taped on the head for the obvious dickhead joke. Or behind the door something else. Maybe he got a guy from peel sizing to wear a werewolf mask and hide behind the filing cabinet with a machete. He’d jump out at exactly the right moment and scream, “BLOOD! BLOOD! BLOOD!” I was just beginning to wonder how he got access to this floor when he turned the knob and swung open the door.

In McCarthy’s hospital room they caught him smoking in the bathroom. Bare-assed on the shower chair, his bandaged stump elevated, puffing away on a Parliament. Skinny, pale legs elegantly crossed; the paper gown bunched up at his crotch. Sitting like he was not the thing but rather the thing upon which he was nailed. The nurses clucked and shuffled him out of the shower and back to bed.

At home from the hospital, his wife cased up his guitars. The whole planet Earth knew they would have to be sold to pay the hospital. Anyway, they were no longer of any use. She checked his dressing twice a day, carefully dabbing sutures. Rebandaging as gently as possible. Making sure the stump was draining correctly. Making him comfortable. Making herself smile. Making simple dinners. Making smaller plans. Making plans for thinner days.

At night he dreamed of holding a fork. He dreamed about shifting gears in the old Mustang with no air-conditioning and how he could smell gasoline through the dashboard. He dreamed the smell of his baseball glove and the leather pop it made stopping a ball. Going for a beer, he was shocked by the pain as he bumped the handle of the fridge. He had reached for it with a ghost.

But Mike didn’t kill Anderson. My relief was equal only to my disappointment. What he had done was find an unused office to hide his banana filler experiments, which had been going on for some time. Bananas piled on the desk, bananas spilling over the guest chairs, sprouting from the filing cabinet. Everywhere bananas. A bounty of industrial product created to match a manufactured demand. He made tuna-filled bananas, Spam sorbet bananas, Denver omelet bananas. A bunch filled with what looked like strawberry yogurt leaked its guts onto the floor. I tried a special one he dug out of the pile filled with a spiral of spicy taco meat and the whitest marshmallow I had ever seen. He had one in a box he wouldn’t let me touch. All he would say was that it was of a Bolivian variety. All the flavors and combinations the gods could have never dreamed up because they simply don’t have the power.

Spitting out the taco and marshmallow I asked:

“What really happened to Anderson?”

Mike, laughing, spitting out something that might be buffalo steak or chipped dolphin meat, said:

“Anderson? Promoted out. They always promote the assholes.”

Jason Boling is a member of the Writers’ League of Texas and dreams of a world where cowards are shamed, art is rewarded, and jobs are optional. He writes short fiction and poetry under the pen name Jon Fotch. He lives in Austin TX where he spends most of his time repurposing fireworks. His work has appeared or is forthcoming in Avalon Literary Review, Avatar Review, Beloit Fiction Journal, BoomerLitMag, Brushfire Literature & Arts Journal, Carbon Culture Review, Caveat Lector, The Conglomerate, Courtship of Winds, Evening Street Review, Euphony Journal, Flights, Green Hills Literary Lantern, The Hungry Chimera, Menda City Review, moonShine Review, Mudlark, Waving Hands Review, and Whistling Shade.