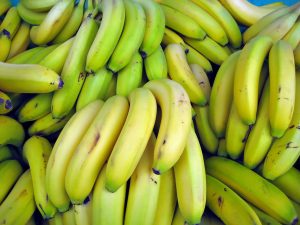 The bananas were rotting on the factory floor outside of St. Petersburg. In early October, the temperature inside the nearly abandoned building held at just above freezing, too cold for the tropical fruit. Banana skins were greying, developing dark spots. They would survive just another week.

Three metric tons of neatly packed boxes, colorfully labeled and perforated with holes so that the fruit could breathe, towered on both sides of the assembly line. Until the previous winter, the factory manufactured sixty-three tractors a day; then production stopped. The bananas were a new venture of the young would-be acting director. They’d been purchased on an unsecured loan. They needed to be sold.

To start with, there were some among us who found the task distasteful. Some questioned the means by which the young administrator had come to possess the bananas and the command of the factory’s books. It’d been months since the engineers and the factory workers received a salary. Everyone needed to find new sources of income, but getting involved in financial schemes was a long way to fall. Just yesterday, it seemed, we believed in a future where money would be unnecessary.

Bananas didn’t permit philosophizing. The cold was ruining them.

There was only one telephone in the factory’s vestibule, and there we kept a watch for the incoming calls, the person on duty donning a WWII-era fufaika for warmth. The rest of us made calls from our homes.

Liudmila was the star salesperson. How did she do it? She said she convinced herself that she would talk to whoever answered the phone, and push and push. Perestroika had brought the Yellow Pages to Leningrad, and she had a shiny 1992 copy of the business directory. Placing the phone on her kitchen table, Liudmila fortified herself with tea and ticked off the numbers in that book. “Produce store number twenty-three? . . .  A private residence? I’m sorry, I’ve got the wrong number. Do you happen to know how I can reach number twenty-three? . . . Okay, number twenty-five will do. . . . Yes, I have my notebook in front of me. You see, my organization has received a large shipment of exotic fruit that’s now going bad. We can’t let it go to waste when so many residents of our city are starving. . . . Your daughter-in-law is a cashier at a supermarket? How wonderful. . . . If she can connect me to her manager, perhaps, we’ll be able to give her a commission. What about yourself? What do you do? . . . A school cook? The school must need fruit for kids’ lunches. I have a daughter in school, and she says they haven’t seen fruit at the cafeteria in ages. . . . Who is responsible for procuring the food for your district? Will you give him my number? Tell him Liudmila called. We have enough fruit to feed all of the city’s children. In good condition! I’m willing to bargain.”

Liudmila had been trained as an engineering technologist and spent twelve years receiving rejections on her improvements to the tractor design. “Selling fruit is child’s play,” she told her daughter, who came home from an after-school computer class in the middle of this calling. “With the right combination of questions, the stranger becomes an instant ally. I feel like I’ve been granted a second chance at life. Do you want to give this a try?”

Her daughter backed away from the telephone and hid in the bathroom. It was growing late. Some of the numbers Liudmila dialed had been switched off for the night. She called her colleague at the factory and signed off for the evening. “How are we doing?”

“Two more deliveries scheduled tonight. Start again as early as possible. Try to reach the decision-makers at home. Once they’re at work, the day’s done. The bureaucracy takes over.”

Beep, beep, beep. Liudmila nodded off to the sound of the dial tone and woke up only when the door from the bathroom opened and her daughter emerged. Liudmila rubbed her eyes and followed her daughter into their room, helping the girl pull out her bedding from storage under the sofa. “Everything’s okay at school?”

“They don’t need any more bananas, if that’s what you’re asking.”

“How do you know? Aren’t the kids buying them? I better talk to your administrator. Bananas are so much more nutritious than that porridge they feed you.”

Her daughter slipped under the blanket and stuffed her head between two cushions. Liudmila walked over to kiss the back of her head. “I won’t say another word about bananas. No need to suffocate! You can turn over.”

She went into the bathroom to brush her teeth and rinse before bed. The mirror and the tiles were fogged up. How many hours had her daughter spent in the bathroom, and what had she been doing all that time? The girl would be sixteen—yes, sixteen—in the spring. Had she learned to masturbate? Liudmila turned on the hot water and sat on the edge of the tub. Coming home from school, her daughter often rode the public buses and the subway. She never said anything about men rubbing against her in the packed transport or about being propositioned by the drunks loitering near the kiosks at the stations. She must’ve found her own ways of dealing with that. Some mothers sent their daughters to tae kwon do classes, to teach them to defend themselves, but how did anyone have money for such things these days? Perhaps she could exchange a box of bananas for some private lessons for her daughter. Liudmila wasn’t sure her daughter would go. The girl was slightly overweight and disliked putting on tight-fitting sports clothing. Besides, Liudmila needed bananas to pay for utilities, clothing.

She’d rested her head against the tiles, and let bananas swirl in front of her eyes. The sound of the falling water and the warmth spreading upward from her feet were lulling her to sleep. What a lovely color ripe bananas were. They smelled and tasted of a life on a tropical island where one only needed to reach with her hand and be fed. In their dank climate, she needed a dream to keep the bananas from rotting. Selling them, that was the thing.