For my Ali İsmail, Berkin, and other protestor boys
who were killed during Gezi protests
during the summer of 2013, in Istanbul.
These were peaceful demonstrations protesting the
government’s plan to remove Gezi Park,
which is one of the few remaining
green spaces in Istanbul, Turkey. 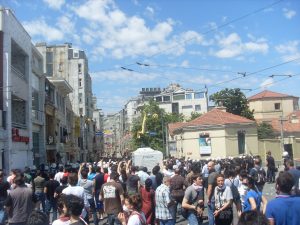 Today the sun set behind the street where they beat the kid.

If I were to start telling the story right now, none of them would listen. Last night, my eyes saw what they saw. They would look like they were listening, but wouldn’t actually care. They would have me write what I described on a paper, sign under what they told me, and that would be it. They don’t dream, all of them have three-minute-sex and go to sleep. Safe and sound behind steel. None would understand. They wouldn’t hear me. But they surely would glance at me, from feet to top, blink in an odd sequence and wet their lips. I would catch that, and want to leave at once. The kid, he waits at the tip of my tongue. I would spit as I crossed the doorstep, and the kid, he would fall.

Everyone has a hernia in this city. Even public buses are humpbacked. The roads are sickened, tired of us all. The more tired people are, the more squished are they, as they climb crooked slopes. Colors are watery. The only thing that isn’t mixed with water these days is blood. Oh, we have plenty of it, and it is pure too. The kid’s body must have been heavy on the dented ground, as a broomstick fell hard, milliseconds after he did. Our essence, what made all of us human was devoured amidst hairy arms.

I have been staring down the window in my hotel room for two days. If they beat another child up, this time I will run outside, I will grab their hairy hands. Break their sticks in halves. And I will have the strength. I am already the element of surprise. Their befuddlement will be my cue. I will punch and kick them where they sweat. No more beating up kids, I’ll say. You cannot beat kids on my watch. I will shout, and swear. Oh I will swear! I will leave their mothers out of it, though. I will freak out, pulling my hair and steam coming out of my ears, they will shiver with fear. Their bodies will shrink within their shirts with rolled up sleeves. The damage they’ll take will surge their nerves out of their heads, and bend their humpbacks even more. I will crush them, hard, the same way I crush flowers. The sidewalk will have their faces on it, and the soil underneath will taste their essence. The asphalt may reject their trickling bodily fluids. My wide-open eyes will suffice to tell my story. Their ears will explode when they hear me. But who am I kidding…

No one has come by since they swiped away what was left of the kid.

I wanted to migrate, but within the borders of the city, I found a wide window and sat in front of it, watching as life passed by. I’d adjusted my hearing to capture the games that children played outside, and mute the noise hovering on intersecting boulevards. I had things to discuss with the city, through that window; about why certain things were left in the past and why the city had had problems taking me in. Kids didn’t cross my mind as I got the room key. Punches and kicks were, at best, material for those inert screens, or so I thought. But lately, I did hear voices of little ones being picked at as they walked outside. Aren’t children supposed to be chubby? Aren’t they the sun that rises from between faraway mountains in watercolor paintings?

I used to look at my own belly and ask: what would it be like to give birth? Who are those who give birth to boys with wide shoulders and vicious looks in their eyes? I have similar unanswered questions. Some sort of love, or longing, from afar and intermittent. I was truly away from motherhood, until that night. At the hotel in Pera, I had been sitting on the bay window’s seat, overlooking Kasımpaşa, trying to pinch the clouds I could see above. I could say that I was trying to process the things I contemplated: the calm waters of Haliç, the poster paint colors -blue-yellow-green-white, the crossing roads, walking shadows, elongating skyscrapers behind misty day air, the anxious sounds rising for centuries. A fingertip had smeared the centuries-old-colors. Neighborhoods in pounding pain. Horn, horn, horns. Buzzing.

Then I held my breath until dawn, careful. Yelling traveled all the way up to the eleventh floor. Overly confident car park worker. A hotshot, he drinks, he smokes. Two more folk songs to cry and he’s done for the night. The worker is as good as an intermediate author at writing. A bit of a poet even. At the same street corner, endeavoring for every single person that parks their car, inch by inch. Some other guys were quarreling down the street, so I hid behind the curtain. The big fish signaled the parking car “OK,” and rolled his sleeves as he saw the crowd filling the street. He very well knew what was coming, he was used to this, he knew how things rolled around here.

Songs held slogans in them. Rhymes were following the crowd as it gradually moved. Men in a veil of smoke. Old dogs accompanying the crowd howled one last time. I wished this scene to be the last one of the night, but the conscientiously-rolled up sleeves of the young man downstairs decided otherwise. The crowd multiplied, got separated into two. One group disappeared beyond the bridge, but the other stayed in the street below me. Tiny bodies sang bass baritone marches. Men holding machetes arrived before long. The gas that covered the crowd like a blanket came closer up to my floor. As the gray dispersed, I tried to see the fleeing heads.

Among all the heads, one black dot couldn’t keep up with the crowd, became trapped between car workers holding machetes. I bit my tongue and clung to the glass. A dark body got in the way between me and the kid. I couldn’t move. When I saw the black dot stumbling away, something warm spread inside me. I was relieved.

The guy with the rolled-up sleeves ran, fast. He grabbed the black dot. Swirled around him and laughed at him and cursed.

Steel bodies swarmed around the game. First mouths spit at him, then limbs hit him.

The black dot was devoured.

Could my hands break through the glass?

It would suffice to just be able to open my mouth, and shout at myself.

If I could wake my legs up, and start running.

If I could slap the empty faces of the guys watching the kid laying bent in half on the ground, shake them into reality.

If I could break through the glass. The black dot wouldn’t be lying dead. If I could start telling right now, about last night, about the hours I spent clinging to that window, about how I exited this vessel and was patched on the kid’s bones. They swiped him off the ground in minutes. None of them would understand. They would laugh though, at the way I’m telling this. They would mock me, even ask me whose side I was on. They would pat one another at the back and loosen up, lay way back on their chairs and glance at me, once again from feet to head. And I would wait.