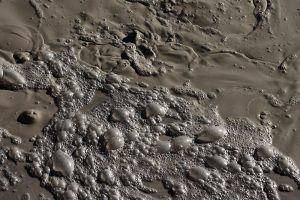 And when they come at last to pull him
from his throne of gold, what waits for them
has neither name nor shape, is something
huge, amorphous, all but still—until it moves,
its sides begin to ooze like a spreading stain,
but thick, gelatinous, a viscous thing—
like the Blob in the ‘50s horror film,
though this one is no alien, but made in the USA
of the American amoebic dream;
no stopping it, the more it engulfs, the greater
it grows, it swallows friend and foe, barn silo house
and all, and then the fields, moves on
to the metropolis, till all are wallowing in goo,
the narrow alleys fill with pouring slop,
the streets at first are slippery, but soon become
impassable; a glacier made of gelatin, it flows,
molasses slow, swallowing what it passes,
glows with the lighted windows
that, ingested, still give off an eerie light, burning
orangely through translucent ooze, a mucous
mountain wobbling like a giant pudding on a dish,
absorbing all that it runs over as it grows,
as it feeds itself off the general morass—
and all the old outlines
into which we poured our grief are lost, the urn
of lamentation smashed, its pieces in the trash,
until, it too, is eaten by the molten mass
of melting flesh—absorbed, like nuts
in liquid fudge, every living solid thing; until,
so much eaten, so many
gone, so little left, it heaves
and in some perverse
reversal of a glutton’s dream—
begins to spew
back what
it ate
until…but here
imagination, grieving,
leaves the scene,
carrying something
hidden in the basket
that—turning from the horror
and its slime—it had, in secret,
been weaving all this time.