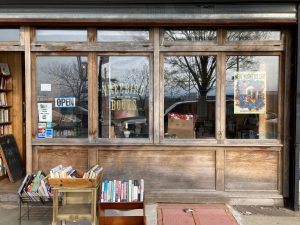 Peter runs a used bookstore. Runs is the wrong word. It’s an act of charity. Peter has a real job, but when the store’s previous owner gave up, he bought the stock, took over the lease, and kept it open Thursday and Friday nights as well as weekends. It is on an inaccessible stretch of waterfront, one of those isolated slivers sheared off by Robert Moses’ Brooklyn-Queens Expressway and left to die. There is no nearby train. To get there involves walking above several lanes of severely incised highway.

For a while, Peter made a go of it. He organized events, a Post-Apocalyptic Reading Group, movies projected on the back wall of the adjacent building, book-themed barbecues. Briefly, a trendy Thai restaurant opened down the street. It had lines out the door. People, waiting, wandered into the store. Some of them recognized Peter from his other life. “What are you doing here?” they asked.

What is he doing here? Maintaining a tradition whose economic model is long defunct. Peter doesn’t pay for used books. They are donated or he finds them left on the street. What little money he makes does not begin to meet the rent or utilities. A used bookstore is like one of those freakish pools that form in the middle of a stream. The current rushes by on either side, but here is cessation, and a corresponding rise of something else, whatever is tamped down or drowned out by the time- and money-driven rhythm of our daily lives. It is useless, valueless, and, precisely because of that, necessary and restorative. But you can’t justify its existence by any of the standards currently held dear. It’s wasted space, a dropped stitch in the fabric of things.

I haunt these places, chase them down as they disappear, walking further and further out to where housing is decrepit but affordable, the locals still scruffy and, some of them, word-obsessed.

Recently, Peter got married. Now the store’s hours are down to weekend afternoons and evenings. He has let a group, Books Through Bars, take over the basement. They send books to prisoners. The inmates are asked what they would like. It’s an interesting mix:  How to Draw in Simple Steps, Howard Zinn’s alternative American history, a workbook for aspiring entrepreneurs.

One January night, wind was howling through the arms of the few remaining container cranes that dot this section of harbor. A huge Alp of salt, stockpiled by the city for imminent snowfall, loomed opposite. Inside was only one customer, Augie, an elderly man killing time before returning to a home he described in such vague terms we were not sure it existed. He was a former longshoreman, he claimed, who used to work around here. Toothless, he sat by the space heater Peter keeps up front, munching on some unidentifiable roll or sandwich, much of which escaped his mouth and scattered over the floor.

“I feel terrible about this,” Peter whispered, “but I think I’m going to close early. I don’t want him to feel kicked out, but no one else except you has been in for hours.”

Before leaving, I did what every author does, even if he tells you otherwise: I checked the shelves for titles of mine, for any proof of my existence. As usual, in my alphabetical niche was nothing, just an imagined emptiness between Ayn Rand and James Redfield’s The Celestine Prophecy.

I left, walked a few blocks, and looked back. Augie must have headed in the other direction. I didn’t see him. The light in the window was still on. Then it went off. Freezing, I turned to negotiate the walk uphill, back to civilization.

Thomas Rayfiel is the author of eight novels, most recently Harms’ Way (Permanent Press.) More information about him can be found at thomasrayfiel.com.