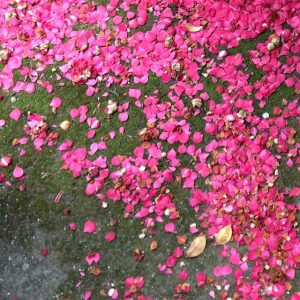 One has a dog named Willow. One lives in San Diego now. One has a cat. One likes hummus.

One has trouble concentrating. One doesn’t get along with her mother. One says, You really see why you’re so fucked up when you move back in with your parents during quarantine. One says, My dog has anxiety.

One loves model trains. One loves baths. One misses Denny’s.

One is the teacher. She obsesses over the others and wants to grow a garden but is too busying obsessing. This one misses her office–her green mug, her pencil plant, the red-tiled rooftops of the college’s buildings.

What’s the name of those big blossoming trees on campus? she asks her husband. The ones so optimistic, in garish pink? Her husband’s from California. He should know. But he doesn’t and she can’t remember and it doesn’t matter because she has work to do, listening to her students on Zoom, grading their essays on the couch, going online and ordering seeds. Kale. Radishes. Snap peas.

One says, I can only concentrate while doing a puzzle. One says, I feel like I’ve lost my life.

One of us stands on her shady patio, between grading sessions, looking to see if snap peas have started. Not yet. Not yet.

One of us sits in front of a glowing Eiffel Tower during class. One of us quiets the dog as class goes on. Just as class ends, one of us us smiles as the cat sashays in front of the camera. Then we all smile.

One of us used to cut hair.

One of us can’t take the news.

One of us says, I keep wondering when this will end.

One of us says days blur.

One of us says nights seem long.

One says every day is a new adventure.

One says, I’m so mad there will be no graduation. No caps. No gowns. No champagne.

One says, If you do cut your own hair, make sure you don’t take off too much.

One says, At least my dog isn’t so anxious anymore.

One says, How’s the puzzle going?

One says, So far, just a few blossoms.

One of us thinks, I still have forty essays to grade. Will this semester never end?

One of us says, thank you for the extension.

One of stares into a clay pot on her patio, marveling at the first glimpse of green.

One of us dreams of the ocean.

Finally, it’s May. The semester’s almost over.

One of us pulls slender radishes from the soil, goes to meetings on Zoom, goes to class on Zoom, finds in a notebook where she’s written down what the soft-spoken doctor, testifying before Congress, said (when? a 100 days or a hundred years ago?): that the window was already closing, that time was running out, that people were getting restless, that the winter to come could be the darkest winter in modern history.

She turns in her grades, then reads her students’ final essays.

Isn’t it supposed to be the other way around? her husband asks. Aren’t you supposed to read their essays first, then submit their final grades?

This was a class in creative writing. Autobiography. She’d told her students back in April the pandemic delivered us a large, unruly plot. The rest was about us–character.

What she didn’t say: it’s always autobiography. Don’t believe anyone who tells you otherwise.

Anyway, everyone gets an A this semester, she says.

Doesn’t everyone always get an A? her husband says.

She laughs. Anyway, that’s not the point.

What is the point? Is the point to figure out the point? To sail instead of sink? To remember the name of those blossoms, the ones on campus that made spring spring?

The students are the blossoms, she thinks. She tells no one, not even her husband. It’s too sentimental to justify. Still, she allows herself that. A little sentiment to celebrate the semester’s end, something to accompany the rest: the numbers she’s written down, such as 1,132,825 deaths worldwide on this particular day, a number sure to seem small some time, later on but today? Today it’s staggering.

She closes her laptop.

When grades are in and her small boat finally comes ashore, the snap peas wave from the patio, climbing toward sunlight, curling up bamboo poles. By August they’ll wither.

The teacher sleeps all summer, then wakes to pull slender radishes from the soil. Also, a few bunches of kale. Then fall begins. A new semester. Every day in fall, then winter, and then the following spring, she sees new faces, new students. Every day, a new chart, new cases, new essays, a new backdrop, Paris behind them, cats in laps, the windows shut now to keep out the cold. Sailing along, still sailing on the little boat of Zoom.

Still, she remembers the first.

All so tender, all so bright.

Marilyn Abildskov is the author of The Men in My Country. She is the recipient of a Rona Jaffe Writers’ Award, a Glenna Luschei Prairie Schooner Award, and honors from the Corporation of Yaddo and the Djerassi Writing Residency. Her essays and short stories have been published in Ploughshares, Sewanee Review, Crazyhorse, Southern Review, and Best American Essays. She holds the 2021-22 Olivia Filippi Chair in Creative Writing at Saint Mary’s College of California where she teaches in the MFA Program.