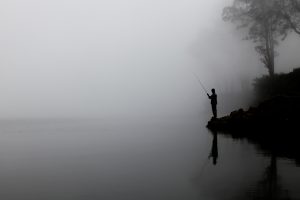 A lonely trout swam in circles among the pebbles in the shallows of the lake, murmuring about fillets. She knew it was unhealthy and pointless to dwell on morbid fantasy. Yet she could not forget. Her nightmare recurred. True, it was a happy fact that she hadn’t been eaten. A reason for relief. Despite her best efforts, however, the vision came relentlessly. Every time her mind slipped, there was that human, scaling and butterflying her, slicking her with olive oil, crisping her on a grill, skin-side-down, before finishing her with a bright squeeze of lemon and licking the flesh off of the tiny bones, and letting the pup gnaw on the big bones. Her life could have gone in this way…

But she had been spared.

I was initially intrigued by Ms. Fish, and her story, because of this fact. Not many fish survive this experience and are subsequently willing to talk to a human.

She recalled the day. She had been foolish, daydreaming, swimming circles around a pair of Wellingtons. The midday light, or maybe it was late afternoon—she couldn’t quite remember—glinted against the rocks. She let her mouth drop open a little, and hook!

Her lip had been hoisted up, carrying the entire weight of her body, twisting her mouth into a grotesque pout, somewhere halfway between a sultry smile and a grimace. Her lungs had collapsed in the absence of water. Her eyes had popped as she struggled and strained to release herself. Ms. Fish flopped, paralyzed by shock. After a few seconds, her head began to throb, like some horrible Monday morning hangover. At least, that’s the way she described it to me.

And then it was over; it ended just as jarringly as it had begun. She was dropped right back into the water, a bit of blood trickling from her mouth. Fellow-fish hardly gave her a glance as they drifted past.

Ms. Fish attempted to speak about her experience with other fish, but most merely grinned (as much as fish can) uncomfortably. A friend she had known since they were guppy-sized insinuated that Ms. Fish had brought it upon herself, flashing those “shiny scales.” By the time I approached her, she distanced herself from the rest of her shoal. She told me she had already been thinking about therapy for a while.

Ms. Fish wondered why the human chose her, and not some other fish. What a strange sport, these humans play. That they would go through the motions of killing her, dangle her life in front of her eyes for fun, with no intention of actually following through with the act…that this death simulation was simply an afternoon game, seemed unreasonably cruel to Ms. Fish. It was better to be dead, then carry on, marked by an ugly scar, unsuitable for summer mating.

Why hadn’t they killed her? She wondered darkly if she didn’t look yummy enough to eat. I assured her this was not so; she was a gorgeous specimen. Just a bit petite.

She relived her nightmare over and over again. In other dreams, she was made into juicy eskovitch, filleted, marinated in vinegar and peppers, browned in a pan. Served with lettuce, tomatoes, in between two buttery toasts, with a side of crunchy pickles.

That wasn’t even the worst part of it. Up until the “fishing,” she had never felt the weight of her own body, nor grappled with the concept of water. Ms. Fish had been born and raised in her lake, knew nothing different. Only in that moment when she had been pulled out of the water, in the absence of her lake, could she comprehend her own heavy corporeality. She spiraled into an existential panic.

I asked Ms. Fish why she finally decided to meet with me, instead of, say, an eel, which would have been substantially easier. She demurred every time I asked this question. I continued to press her on the issue. On our last session, she confessed.

“I sought you out. I knew you walked along the lake every morning. I wanted to have the opportunity to study you.”

I coughed; this scheming was unexpected. “Me?”

“A human,” she clarified.

Good. She still didn’t know. Better that way. That day, I had used my favorite, red-feathered lure; a gift from my wife. It consistently produced a lucky catch. “What were you trying to learn?”

“Well. I wanted to understand how your species are capable of committing such monstrosities.”

“Ah. Monstrosities? You should try to expand your perspective.”

“How do you mean?” She paused in her swimming.

“For one thing, fish don’t feel pain the same way humans do…”

“No, no, no. That’s not right. Simply not true.” She resumed swimming. “And anyways, that doesn’t explain…”

I shrugged, nodded as she carried on. Who had the heart to tell her we just couldn’t care less?

Image By: Photo by Dieter Kühl on Unsplash