Catfight at the Polling Place: November, 2018 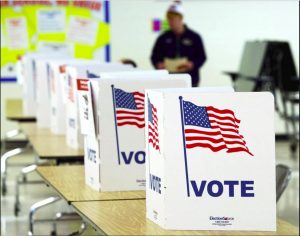 We had been standing in line for hours. Days. Months. It felt like we had been standing since the beginning of thought or reason, for centuries. Some of us had been waiting, every hour, every minute, for two years. The waiting, the desire to vote, had worn down our actual physical beings. No one was getting much sleep. We wanted to vote, partly to elect a government that would allow us to sleep for eight hours, to relieve us of the terrible, relentless burden of staying awake.

We wanted to vote and we wanted our vote to be counted, and we waited in line at the local elementary school where the voting machines were set up. Clutching our sample ballots and our voter IDs, more than one ID if we felt our photos did not represent who we were, we wanted to mark the name of the person who would represent us in our government. Our love for our chosen candidates was gigantic, crass, and embarrassing. It was a specific love, not for a parent or a lover or even for a celebrity; it was demanding and hungry. We wanted to be heard. Many of us wanted what was happening in our nation to stop. We were the ones most aware of the enormity of our love at this moment. It was almost unbearable; our hearts pulsed inside us like tiny bombs.

The line was mostly silent, no one talking to each other, just waiting, shuffling forward step by step, and checking their phones. Everyone’s face was blank. We were pretending to be polite. Each time we stepped forward felt like an accomplishment. Inside us lurked the desire to open up each other’s heads and see what thoughts slogged around in there. Or, perhaps not.

We saw many people we knew or imagined we knew. There was the register worker at Food Lion and the waiter at the Pita Pit, and there were parents we liked or not, there was the kickboxing instructor from the Y, there was the crossing guard for the elementary school, there were the joggers who ran circles around the neighborhood, there was our pediatrician. We did not know who would save or destroy us. Everyone resembled a person. The fragile entity that was democracy was cradled in all of our hands.

There was a cat that wandered around these premises. In fact, there were two. We had seen them in the neighborhood, and they belonged to no one. One was a small orange tabby with eyes that matched his fur. Another was larger and gray, with a feathered tail and furry legs, so he looked like he was wearing pantaloons. The gray one we secretly called Fluffy. The orange one was Mercury. They trotted over. They were both going about their day, involved in their regular cat activities. Fluffy rolled around in the grass. Mercury lifted his paw and gnawed on it.

We all moved forward in line slowly, as though pulled by a magnetic force.   There was only one direction to go. Or we hoped this was so. Everyone moved toward the polling place, silently.

The cats sat beside each other in the grass and watched us. They had such shrewd faces, their pointed chins. The faces appeared to mask a probing and acute intelligence. What deep thoughts turned in their dark cat minds! A few of us glanced at them and smiled.

Lucky them. They’re fine whatever.

Right. Just chasing squirrels and such.

Look at that cutie’s face!

Don’t you just want to kiss it!

We stood in line, relieved to admire one thing together, as a group. We were, us humans, not that bad. We could love these cats! There could be a facet about us that was simple. Redemption was, perhaps, possible. We stood on the damp brownish lawn, shivering, clutching our sample ballots, trying to be comforted by the way the cats regarded us.

Fluffy and Mercury sat on the lawn beside each other. Mercury had a long orange tail and it flicked behind him, back and forth. Fluffy stared at the air with an expression so empty it seemed belligerent. Then he raised a paw. It was a casual movement, as though he were raising his hand to be called on in school. Fluffy gazed at Mercury, and then raised his paw a bit higher and and thwacked Mercury, hard, on the head.

The people in the line gasped.

Mercury turned to Fluffy with an expression that was hard to interpret.

Mercury growled, the sound of a car engine starting.

Mercury leapt on Fluffy. A vigorous cat wail, which sounded like a baby’s cry, seared the air.

A ripple went through the waiting crowd.  What was wrong with the cats? What was happening?

The cats looked like stuffed animals wrestling. But then there was the guttural, murderous screech they made.

My god, what’s wrong with them!

Cats do that. Leave them alone.

You guys, they’re going to hurt each other! Look at those little ears.

Fluffy’s back arched. He hissed, making the sound of a dragon. Kaaaaaaa. His entire face contorted around that hiss into the precise shape of a snake’s. He looked like he wanted to consume the world.

Now the cats were running. They bolted through the line, through the door, and into the school cafeteria that was now a polling place. They were a gray and orange blur, their bodies low to the ground, zipping around the people who were presenting their IDs, past the police standing by the door, past the table where poll workers checked your registration and gave you your ballot. The cats were inside. Their thick, furry bodies thrummed against the floor.

Everyone stopped voting. Voters lifted the curtains and peeked out of the voting booths, the workers at the foldout tables jumped up, a stack of voter registration forms slid onto the floor, a man began to wheeze. The cats blazed around the room, with no regard for anything. They made a sound like screaming. They were concerned only with their own battle, the roots of which appeared to be profound, hairy, and deep.

Throw some food at them.

What the hell’s wrong with them?

They’re gonna kill each other.

A poll worker threw a water bottle toward the cats, not very effectively, for the bottle just bounced off them and rolled away.  The cats’ wails were strengthening, like the cries of babies. One of them was bleeding. Clumps of fur floated through the air, like dandelion tufts.

The cats ran through the room. There was the twisted squeal of rage, the cry of a baby, the angriest baby in the world. Everyone moved backward, slightly; now people were afraid. The cats scrabbled over a woman who was wearing shoes that exposed the top of her foot. She shrieked. Where was a Band Aid? Did anyone have a Band Aid? The cats left a scratch on the arch of her foot. This led to a ripple of unity among the voters. No one wanted to get scratched.

Kick them, that’ll stop them–

The cats easily evaded the people’s slow and ill-considered attempts to stop them. They darted under the booths, under tables, in corners—no one could reach them. One of the cats bit the other; blood streaked onto the floor, a bright red. Some of the voters’ faces became even more blank, erasing any trace of expression. Some faces tightened with horror. Some voters lunged from their valuable place in line, trying uselessly to stop the cats, and then stumbled back, afraid they’d lose their place. Then a segment of tail skidded across the floor—part of a tail, detached from its owner. One of the cats had ripped off the other cat’s tail.

The cats vanished at moments, beneath tables, under benches, but the air was alive with the weird, almost-human sound of their yowling.

The tail skidded across the floor and then there was what seemed to be an ear and everything stopped as the voters waited to see what would come off next. They did not want the cats to die, of course, no one wanted that, but they wanted, with a certain peculiar paralysis, to see what would happen. No one moved. The voters’ faces were both upset and somehow expressionless. The cats were both damp with blood, no one could see what was happening, but as they chased each other we glimpsed their eyes, glazed with a hard and luminous brightness, eyes that saw everything, eyes that could perceive their own death and wanted terribly to live.

Then the two cats whizzed out, past those waiting in line, the cats damp and injured and still running, and they ran, two damaged furry streaks, still running and then they headed across the parking lot and vanished.

There was silence in the room. A couple people clapped, which enraged others. A young woman was crying. One woman sighed sharply and said, For god’s sake, people!  and left her place in line, following the cats with a stern face, and others said, Come back! Vote. Here we were, clutching our ballots, still alive. No one seemed happy to be left here. In addition, no one quite knew what to do with the blood. The poll workers straightened the plastic foldout table where they sat. The air was sweaty and sour. There was blood spreading, bright red, all over the room, and no one knew where to step.

Is anyone going to help them?

Can someone clean that mess up?

Someone’s gonna slip on it.

The room was filled with a sense of anxiety and shame. No one was voting. Everyone was looking at the blood. One elderly man eyed a wide river of blood bisecting the room and stepped delicately but firmly across it to a polling booth.

One of the poll workers knelt by a puddle of blood. She wiped a little of it with a balled up Kleenex. Others watched, hoping she would continue and clean up all of it. But she only had a small piece of Kleenex, and when the blood had soaked through, she stood up and left it on the floor. She walked back to her seat at the table with the registration forms, and, when she had shuffled a stack together, looked at the line and said, “Next.”

The room was quiet again, filled only with the sounds of people shuffling into the voting booths, making their selections. After, poll workers handed each voter a sticker with an American flag. The cats contained so much. Everyone wanted to ignore the wreckage and gore. The blood was spreading, that vivid redness, it seemed to be reaching every corner, slipping out the door. The voters went to their booths and closed the curtains and then stepped out and fed their ballots to the machine, and the cats kept running, injured, determined, unseen; no one knew if they stopped, which one lived and which one didn’t; no one knew if they killed each other or if both cats, maimed but oddly sturdy, lived. No one knew what would happen. No one knew what sound they would make now, if they would ever sit beside each other, purring, or what would rise out of their mouths. Everyone marched over the blood and voted, some stepping noisily through the blood and some more particular about their shoes, and then they left. They walked to their cars and buses and they walked home, waiting for the results, waiting to see if they had made a difference, everyone’s heart a faint glitter of hope. They walked home and tried to breathe. And though some people talked that night about the catfight at the polling place, most pretended that nothing had happened and sat, trying to hope, in front of the television, while the mangled cats ran and ran, not stopping, through the parking lot and the playground, through the trees.