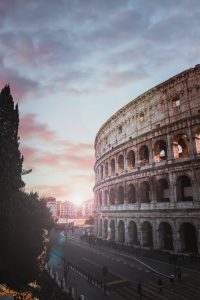 Minutes on trains are longer than rivers. This, Chiara knows. It’s only two hours from Naples to Rome, but gazing at the grasses and soft vanilla clouds, it feels as if years have passed. Chiara sighs at the glass.“Are you sure we can’t go swimming?”

Her father’s breath is slow. “It will be too late, tesoro.”

“But Liliana goes swimming at night. Zia lets her do it all the time.”

Her father’s eyes fall shut. “Chiara,” he grinds his teeth together.

The train gasps into an unlit tunnel. It sounds like the ocean at night.

The snack cart inches alongside her father and he lifts his hand like it’s hurt.

Her father rolls his eyes. “Tesoro, you’ve had too many already.”

“But I want one,” her reflection huffs in the window.

Chiara’s father had a bright face once. In the sapphire dusks of the garden in Naples, her father had the smile of a saint. But now he is smudged, and he falls asleep on the couch with his mouth wide open. Sometimes he wears a mask.

“You’re too kind.” Her father is embarrassed. “She always gets what she wants.”

“All pretty girls do.”

“And as they should.”

Chiara wonders at this small thing between the lady and her father. Bars of light rush across their faces, a fence line clicking in the window. Her lipstick is red. Her hair is long and the color of autumn. She winks at Chiara and Chiara thinks she’s the prettiest lady in the world.

The train enters another tunnel, then slips back into daylight. The attendant sways to the back of the cabin, and Chiara watches from her knees.

Chiara’s arms sprawl across the tray.

“Forty-five minutes,” her father says, and Chiara feels sad in the corners of her eyes. It was fifty minutes the last time she asked, and that was hours ago. She presses her cheek against the window. It feels as cool as water.

The city rises and no one else notices. Chiara stares at the power lines, at graffiti codes, at secrets sprayed on walls. The train platform comes crawling in, and everything is brown, shadows, concrete. Chiara gurgles nothing in her straw.

The train gives one last little jolt, and she remains with her cheek pressed against the cold glass.

Heat sucks through the doors, August in Rome, an awful welcome. The air doesn’t feel like air and the sunlight is wrong at the platform’s edge, a dark and smoky yellow. When she swims Chiara will sink underwater and open her eyes until they burn, but it’s already five o’clock and Zia Martina will make them eat. Lili is surely lying by the pool now, afternoon sunshine blooming on the water like flowers. Chiara holds her breath.

With hands intertwined they snake through the crowd. People pass, dim and hazy, some dark-skinned, some not at all, and some in the middle, like Chiara. She wonders how old people grow such wrinkles, how young people draw tattoos. A thin girl smokes a thin cigarette. The sun explodes in her hair. Chiara thinks no girl should have such golden hair, unless, perhaps, she’s a princess.

“Do you see Zia Martina?”

“Zia!” Her voice is bright and loud. Her hands grace the corners of her mouth. “Zia Martina, where are you!”

“Chiara! Christ. Wait a moment. Let me give her a call.”

They move into a shop’s clean air. Her father dials his phone. There are T-shirts rumpled in stacks and rows, Roma, Italia, green and white and red. In the corner a soundless television shows men and women in boats. They look tired and damp, both sunburned and pale, the women sad, the men unbearably happy. A boy lies on his face in the sand, still wearing his shoes, the water foamy and gray. Chiara’s body feels warm. She longs for Lili and the blue shock of water on her skin.

Across the hall is a vending machine. Chiara smells cinnamon in the air. She tugs at her father’s shirt. On the phone Zia’s voice is shrill, as though she were speaking to a dog.

“Pa.” Chiara tugs again, worming her fingers through his pocket.

“Chiara, please,” he mouths, his voice more air than sound. There are bitter whispers of cigarette smoke. Zia sounds like a policeman in angry traffic.

Chiara’s fingers seep like water. She makes no sound, gliding away from her father’s back as he listens and kneads his forehead. She is a shadow, patient and calm. She hides behind T-shirts and scampers out into the hall.

Releasing her breath, Chiara counts the new coins twinkling in her hand. She buys a soda and it’s cold and fresh. Moisture droplets fall on her dress, and by the time she’s wiped off her hands, she’s walked to end of the hall. She squats against the wall in her ballet slippers, sipping her soda, the bottle inverted and tilted to the side so she can see past her curls. The crowd passes like a herd of cows. Workers appear pushing wheeled mop buckets. They slouch off, tugging their hats.

Chiara sets down the bottle. She peed in Naples when they left that morning, but that was a hundred years ago and she doesn’t even want this soda. Her bladder is bursting but there aren’t any bathrooms in sight. She searches for signs. None exist. She’s lost, but not. A hundred times she’s been to this station but never once used the bathroom. Her mother had always made her go on the train.

At the edge of the platform, a tall man turns in circles. His hands form hard little balls in his pockets. His body looks tense and mean. His face is an eagle in a tiny cage, and he gives Chiara a terrible feeling inside. Watch out for those thieving bastard zingari, Zia always says when they leave, but this man looks different, lighter-skinned, like a talented pickpocket king. That makes him even more dangerous.

The train from Assisi pulls in with a hiss, and Chiara checks the giant clock on the wall. When she turns back, the pickpocket king lurches through the crowd as though he’s been shoved. Moving quickly, he checks his phone. Something falls. It slaps the concrete and bounces and rolls and when it reaches her Chiara gasps. It’s money, rolled into a wad.

Chiara stares the way she does when a sly cat enters the garden. The money just sits there, waiting. Her fingers are soda sticky, the light in the room has dimmed, and the crowd on the platform is thin. Even the thief has moved on. Chiara holds her breath. No one can see her at all.

“Chiara!” Her father appears like a wizard. His face is grim and his sweat is dark on his shirt. “You scared me to death!” He squeezes her shoulders too hard.

“I, I…” Chiara feels foggy like she’s just woken up. “I couldn’t find the bathroom.”

Her father sighs, catches his breath, then swallows her in his arms. “Tesoro, promise me you’ll never do that again. You must never, ever leave me like that again.”

“I won’t. I promise.” She releases her body to the strain of his hug.

“Zia lost track of the time,” he consoles, but the voice is distant. Chiara is slow, her hands confused. She’s underwater, tumbling along, past escalators, paninotecas, the great glass front of the terminal doors, jewelry, glittering, light.

“Chiara, please pick up your feet.”

“Principessa? What’s that in your hand?”

She doesn’t understand why she doesn’t speak, just looks at her father and blinks.

“Nothing,” she tightens, chewing her hair. “I want to go to the bathroom.”

Her father squeezes her hand and Chiara’s body unravels. Her fist floats into the air. Her fingers uncurl.

“Where on Earth…? Tesoro, where did you get this money!” Her father’s fingers pry at his skull. “Chiara,” he mouths, dry, empty, as if her name has no meaning. But Chiara barely hears him. For she has never known a fear like this. Her eyes are not her own.

“The pickpocket king,” she whispers.

He steps out before them, his face still angry and hands still balled, his leather boots rooted to the pavement. People fill the great stone room, but only this man seems under siege by the shoulders of passing strangers.

Chiara’s father traces her eyes, then glances back at his daughter. “Chiara, tell me now what happened,” but Chiara recoils from his grasp. Her breath is quick and shallow. She tugs at his arm, toward the terminal doors, toward the light of day, toward Lili.

“Found it where, Chiara?”

Her ballet slippers slap the ground. She pulls and tugs on her father’s arm, but her father says nothing. He only watches and waits. The platforms alternate light and dark. Security guards pass by, a family. When finally Chiara’s arm goes limp, her father extends his palm and she swears she will never speak to him again. She gives him the money.

She sees his hand rise and part the crowd. She sees it touch the man’s shoulder.

“Mi scusi, sir, could you stop for a moment?”

A shadow ripples across the man’s face. “English!” he yells, cutting the air, the anger hot and feverish in his breath. Chiara’s father takes a step back. He scratches his chin. Chiara feels a choke of fear, but the light around her father is calm. He speaks, but not to her.

The moment is quick, the words empty. The pickpocket’s hands are coiled, then not, and her father isn’t scared at all. Words pass wet and fast like wads of tissue striking a wall, and when Chiara realizes what they’re doing, she is amazed. She didn’t know her father could talk to foreigners.

This is how everything changes. Her father speaks and the man’s hands scatter into his pockets. Chiara watches the money take shape, a blossom in her father’s palm. The foreigner’s body sinks, confused, and there are more words, but they’re lighter and made of breath. “Thank you,” the foreigner begs, “really,” and her father gives a nod of his chin. Chiara watches the two grown men. The two grown men watch her. The foreigner reaches his hand toward Chiara. “Thank you,” he speaks in Italian.

“No.” Her father shakes his head. “That’s not what you say.”

The light is so bright. The train is furious. Chiara mouths the words, whispers, and the foreigner looks to her father.

As they leave Chiara watches the giant terminal clock overhead. A stray thread of sunlight touches the glass.

Chiara whispers this word to herself. All of a sudden, she does not know what it means, and feels ashamed. She thinks of zingari and golden-haired girls, of boys who lie in their face on the sand and sunburned women in boats. She wonders if her father can speak to them all.

Sunlight fades above the taxi line. The station clock chimes in a hurry. The city is a purple cathedral of sighs, and people laugh, glass bottles clink, buildings shrink and fade into whispering trees.

“You can talk to tourists?”

Chiara feels something swelling within her.

“I want to talk to tourists too.”

Her father grins, then rubs her head.

Chiara glances up at her father. His face is tired, but somehow, bright, and Chiara hides her smile.

When they arrive, the gate creaks beneath her hands. The garden is quiet, as soundless as the light of the moon. She hugs Lili and Zia Martina and watches Lili dive in headfirst. The water feels cool against Chiara’s ankles, but it is late. She does not go any deeper.