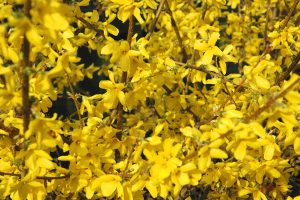 In a three day period, I sent about thirty cluster flies
over, who were slow and dramatically big
like crushing empty cans. If these flies,
which apparently get in a lot of houses
when the days are unpredictably frozen or warm,
were beers, they would be blue cans of Australian beer.
They would play rugby if they were college boys.
After the colonial cop killed an elephant,
he had to think about the cluster flies
that got in his place. It’s a dark night and in the shadows,
John Garfield’s face lights up. Hardly anybody
names their baby Ida or Ivy anymore.
What happens if the the wolf gets to run
everything? It turns out nobody planned
to kill seals at all. At the same time, everybody
felt as if their individuality
was no more than a fly. Wolf’s plan was to steal pelts
from his brother. I put my head in a forsythia bush,
a yellow house. The first smell of warm earth,
the days and nights with as many quiet stretches
as a space odyssey. I trust some bodegas around here
for no good reasons except the sweet smell of incense.
When your head is in a bush, you see the flowers
are all as different as the flies would be different
if seen close enough, with streaks and indentations.
It’s like you get to go inside all the ripe bananas
in the shelf of bananas at the supermarket.
Walk from town to town away from the city,
and you will see each town has a different way
of locking the gates to the jungle gyms,
of tying up basketball hoops, except this dump,
where they play dumb shit’s basketball to death.
Here: a mobbed-up way of not wearing a mask
crossing the street the way early in the morning
before a funeral, a limo driver
jaywalks out into traffic
dressed in his livery, with jacket on
but no tie, not yet. Masks are for business.