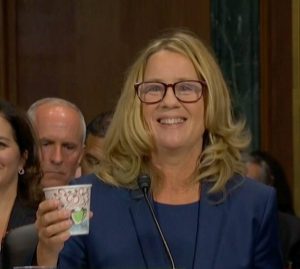 “I’m the last thing standing between you and the apocalypse.” – Hillary Clinton

One of those mornings, portentous, dread-full. A sickly sky, as happens in September in LA, when the wind singes, and the light is yellow-weird more days than it isn’t. The kind of weather, wrote Raymond Chandler, that’s enough to make “[m]eek little wives feel the edge of the carving knife and study their husbands’ necks.”[1]  Plus, we were watching TV. In the morning. (Not a good sign.) Drinking coffee, of course. Waiting for Christine Blasey Ford.

“I think after reading my opening statement, I anticipate needing some caffeine if that is available,” she said.

She spoke then for almost 20 minutes, and maintained her composure throughout. At the end she said (again), “…at this point, I will do my best to answer your questions, and would request some caffeine.” Someone asked her if a coke would do. A coke? For a grown woman? At 9 AM?  But she didn’t flinch, she was only gracious, or possibly desperate. Or a little of both. “That sounds good,” she said. “That would be great, thanks.”

While Grassley stated the ground rules, a preamble to the hired prosecutor’s interrogation, someone (Cory Booker it was later reported) brought the witness (the patriot!) — who was about to be interrogated as if she were the one to have committed a crime — what looked like a real cup of coffee. At that point, wrapping up his remarks, Grassley said, “Dr. Ford, I’m told you want a break right now, and if you do, that’s fine.”

“I’m okay,” said Dr. Ford, opening a sugar pack into the Styrofoam cup. “I got the coffee. I think I can proceed and sip on the coffee.”

One of her lawyers whispered something in her ear, looked like maybe he was letting her know there was a stirrer on the other side of the cup. Dr. Ford, ever courteous, was focused on Grassley, though — so the other lawyer, the woman on her right, picked up the stick and did the stirring. Then Grassley said something about how Ford was fortunate because “nobody can mix up [his] coffee right.” And everyone chuckled, Dr. Ford, too, this polite, capable woman, behaving like a woman, as women are taught to behave: solicitous, cooperative, forthcoming, because if she were perceived to be emotional or hysterical — or anything less than eager to please — she’d be accused, wouldn’t she, of behaving like a woman —?

But, honestly, Mr. Senator, talk about choice of words: Fortunate? Dr. Ford was fortunate that morning? Because someone managed to “mix up [her] coffee right?” Who says? Who says they got it right? I know, I know, you were making a joke, you were trying to dispel the tension in the room — but fortunate? I don’t think so. You maybe were fortunate. We, the American people, might have been fortunate —

But Christine Blasey Ford? If she made a difference that morning — and I want to believe she did — she sacrificed her own good fortune, didn’t she, to a horrible mix-up, which also isn’t the word; no mix-up there. Only blatant contempt for women, for justice, for truth. To pretend to have watched and listened and heard, or not heard what she plainly said; to go on to ignore her testimony — as devastating as it was professional —no question as to her credibility; no question she’d put the fate of the nation over her own. And yet, Mr. Grassley et al., you wound up rewarding him — puerile, shrill, shockingly rude, emotional, hysterical (but in a man, such qualities apparently demonstrate reserves of righteousness and passion) — tell me, please, what’s the word for that?

Galling, there’s one. Galling, grievous, monstrous, appalling, disgusting — there’s a parade. We made more and more coffee. And I wound up crying (so angry was I, even before Kavanaugh’s turn). But Dr. Ford held strong, though she hardly touched her Styrofoam cup. After a break, she switched it out for a bottle of coke after all. Maybe she prefers a cold soda — some people do, okay. But either way, my guess, Senator Grassley? That there was one feeble cup of Joe — disingenuous and insincere — lousy, in short, in keeping with the outcome of the day.

[1] From the story “Red Wind.” The passage starts like this: “It was one of those hot dry Santa Anas that come down through the mountain passes and curl your hair and make your nerves jump and your skin itch.”

This essay is excerpted from Dinah Lenney’s book, Coffee, forthcoming from Bloomsbury in April 2020.