I volunteer at a juvie, call it kid
jail. We play a homemade Boggle, make all the words 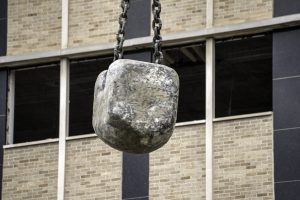 we can, make Mad-Lib things with them like this:
lip split from slipping in shit, I sit and sip
spilt spit.  We write Fast Poems, Rescues, give
a lot of high-fives. One kid loves Fun Facts,
one What Would You Do With Five Million Dollars,
but then just says he’d give it to foster kids.
Fun-Facts wants to buy the building, a bulldozer, knock
the whole fucking kid-jail down. Good call. I
make him write a shopping list: crowbar, hard
hat, boots, say he could rent a wrecking ball.
A third says he’d spend his on, how do you say
it, pro-to-tute? He doesn’t speak English so hot,
doesn’t know “grown-up,” “omit”:  PROSTITUTES,
I say, P-R-O-S—spelling it for
him, cracking up, until Fun-Facts says “Miss, that’s
because he WAS a prostitute.” Some split
seconds in kid-jail I trip over, slip
in my pocket to ponder later, indulge my rage
or tenderness.  I want to bulldoze down
the house where he was hurt, re-set to spin
him back into an unharmed toddler, pluck
his plump self up and hide from what, from here,
we know will happen.  I want to beat a pimp
to death with a crowbar, rent a wrecking ball.
But we only have an hour or so, an hour
that’s not about me or my precious, privileged, white-hot
lily-white heart.  So I spell “prostitute” for a kid
who was a prostitute—or maybe not,
maybe none of these boys has ever been hurt,
maybe Fun-Facts is fucking with me. I spell
“prostitute” and say Oh, man,
you guys are so much more generous than me:
I was going to buy a villa in Venice.
Then they ask What’s a villa? and Where is Venice?
And I draw Italy on typing paper,
describe the Grand Canal and watery alleys,
and floating up to columned villas on long
wooden boats, write GONDOLA, CANAL,
and VENICE, say they can visit my VILLA, bring
all their foster kids, their prostitutes.

Rosa Parks Edits Her Statement as She Writes It

“I had been pushed around for all my life becau and felt at this moment that I couldn’t take it anymore.  When I asked the policeman why we were had to be pushed around?  He said he didn’t know.  ‘The law is the law.  You are under arrest.’  I acte I went will I didn’t resist.”—handwritten note from the Rosa Parks Archive, Library of Congress

I had been pushed around for
what? Because why?  It doesn’t
matter.  The pushing?  It’s not
about her.  When I asked
the policeman why we were,
we weren’t.  We weren’t acting;
we had to be pushed around.  Whether
I acted or not, went willingly
or not, it doesn’t matter.
The point is, to resist all this?
Start out with I didn’t resist.

On the Deerfield River

How long do I have to wait before I start living
the life I want? Pauline says she asked herself
in midtown, chucked it all and moved to Vermont.

Or one of those.  New Jersey? I get them all confused. Chuck
takes me to the Hoosac Tunnel, once our longest, running under
the Berkshires.  Chuck says hundreds died in its construction.

In my lack of imagination I see coal miners, the tunnel interior
fighting back, but when I look it up it’s all explosions, black
powder to nitro, pod of puddingstone demoralized rock

the men all hated to dig: a shovelful of eels.
Walking toward the tunnel an early autumn afternoon
while the others get into their waders, rig up their gear, tie

on their flies, we look at each other wide-eyed when we feel
a basement chill, so sudden you can walk in and out of it,
shadow spilling into light. The train goes by on a tall

bridge over kayakers, men in poke boats, all of them doing
exactly what they want.  We joke about Rachel’s
fishing show, what her fishing show would be.  Specials

on falling, spelling “Hoosac,” 25 silent minutes to tie
a single knot.  I love fishing, don’t care what I catch.
I don’t need the gear and hassle, love wearing waders in the river,

cool pressure of the current on my legs.  I love finding
a muddy bank to lean on, a tufted hillock, a kind of tuffet just
for me.  Or a big rock parting the water, probably blasted

from the tunnel, where I can perch and watch my best friends fish
and stumble, lurch into each other, laugh in the deepening light
on my face, dry empty hands, sun angling out of William Blake.

Josey and I look at each other during the ads
watching news, make the face, the gesture that mean
why the fuck aren’t you already fast-forwarding through
this shit?  We have little gestures for how we send
decisive emails BAM with the pinkie, gestures for how
we use the calculators on our phones, how we text,
gestures with our chins for how the other should be
the one to pick up the goddamn remote and deal.
We laugh, then, keep it on pause, imagine another
time, a time before tv, our phones. Sepia-toned time
when loved ones gestured dialing, holding a landline
handset to their shoulder, spun around in the cord
of the kitchen phone.  Nostalgia!  I sat on a cooler
in my childhood kitchen to be close to the phone,
fondled the cord while we flirted.  The first
time Josey called me I pretended it wasn’t me, said
Who gave you this number?  And she said what we still say:
You did, motherfucker!  I want it all written down,
so one of us can read this when the other one’s dead.
Unless we come up with the right suicide pact.
Something perfect, really funny, you know?  Joke
suicide pacts: the new old age. There must have been
so many loves like ours, so many layers of affectionate
teasing, private jokes.  Couples creating a shorthand
gesture for scythe, or washboard, for making rice.  Churning
butter, pyramid or vellum, shooting and slaughtering
deer. Tired and happy, drenched in their moments.
In a hurry to take more for granted, dismiss their everyday.

“With this fused couple, it’s not always clear where one body starts and the other begins: signs for male merge into female, differences dissolve.”
–Wall text for “Study of a Couple for Florilège des Amours de Ronsard, 1942,” by Henri Matisse, Matisse in the Studio, 2017, Museum of Fine Arts, Boston.

We tell each other boring stories, announce they will
be boring. Josey apologizes for telling guest interactions.

I summarize faculty meetings, describe what’s in bloom
in twelve yards between here and the T. No spoilers, but my

next boring story? It does include some super blunt emails.
The boring story: fresh intimacy.  Wanting to know everything

about your day is an eros—say it again.  Slower. What were you
wearing in line at the post office? Everybody wants to slowly

undress you, cover your body with theirs, up all night
in candlelight kissing each clavicle, worshipping this

hipbone, that stretch of goose-bumped forearm, say I didn’t know
where I started, where you began. But they don’t want to know

how it went with all that produce in the self-checkout line, what
the Globe says about Brady’s longevity, your juice fast, what you decided

not to get at CVS, which guest sent back which drink and how
you dumped it out in front of them, and didn’t roll your eyes.

You are having a bad day.  We all are.  We text
we should have called in crazy.  For serious. We should
have stayed in bed, called in drunk.  We pass a steak
house on the way to work, say what if we quit
while we’re behind?  What if we call in steak?
For April Fool’s, Josey thought of doing
a no-call-no-show, which is this thing where you
don’t show up to work at the bar, don’t tell
anybody you aren’t showing up.  The subway smells
like wet dog, everyone in wool, and crabby, tired.
At work I wait for someone who asked to meet me,
who’s now—no joke—a no-call-no-show.  Then two
co-workers slough off the meeting they asked for.
Everyone else calls in crazy.  Everyone else
calls in dumb. The wintry mix is starting, seeping
into your new shoes. So call an audible, call
an Uber:  get the fuck out, and go home.