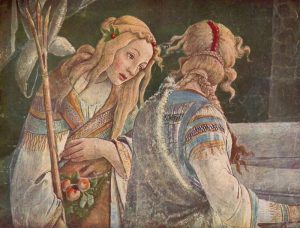 I drew a stick-fetus leaping
in a womb—the letter O in the “pro”
of “pro-life”—silk-screened it, keeping
the dozens of T-shirts for show

and for sale at our speaking engagements.
Red, of course, crimson, and nobody
questioned the color, the O in its rage meant
to frighten our peers from their gaudy

emerging desires. We were Young
People for Life; we spoke to slides
of gleaming fetuses in dark auditoriums
while our listeners sighed
in disgust (disgust with us or with abortion?).
The O circled my left breast, a talisman.

The O circled my left breast, a talisman
against the way the boys we knew
could take what we would never have again.
At Sacred Heart, the concrete Madonna, blue

on a sea of macadam, stood like a buoy
made light through acceptance,
each mortar fold of her robe a do unto me.
We knew which girls Did It, wore hot pants

beneath the dove-gray plaid of our skirts;
they were the same ones who smoked
under the walkway. It must have hurt
them to have their consciences stoked,
but I thought I was the one in the hairshirt—
sixteen and chosen to deliver the Word.

I was sixteen and chosen to deliver the Word,
one of a handful of city spies reporting
to the Human Life Group in the suburbs.
Some students played music, some sports—

but we did more: We were concerned
for the unborn child. On meeting nights,
I’d have them drop me off before the turn
onto my street, then take my flight

into the dark, not wanting them to see
where I lived (not split-level,
scruffy lawn). They took my energy
with them, in their smart cars, out to Bethel
Park, a wholesome place for wholesome families.
I was one of them, not one of these.

I was one of them, not one of these
hard girls who sprayed their hair stiff,
lugged large combs, let their feet freeze
waiting for some guys to drive by. If

I noticed them at all, it was
by way of contrast. There was one
I’d heard had two abortions, in my class,
and with that knowledge my eyes ran

over her as she came in to morning roll-
call. At one of our assemblies,
as we showed the cacciatoried, pulled-
apart fetuses on the wide and trembling
portable screen, I thought of D. with a cruel
precision, gloried in the anguish of her soul.

They glory in the anguish of the souls
who try to quickly enter clinics
ten years later. Children fed full
of venom damn them passing, mimics

of their parents and their pastors.
It is not a grand conversion, how I left them.
I was in college, no longer ruled by my father,
no longer cowed by my church, when D came

into focus as a living, feeling woman
(that I’d failed to see is hardest to confess):
Dim auditorium, her long legs on platforms,
the nun stepping from the aisle to let her pass;
then, minutes later in the Girls Room,
sobbing, her friends murmuring Come on.

A sob in the midst of friends—how commonly
a woman’s body melts to this in labor,
sorrow, grief. But the Virgin had been summoned
from the circle and cycles of her neighbors,

set apart from her gender’s company.
I’d been praised by my parish priest
for my efforts, my unwitting complicity
in an ages-old patriarchal contest.

In art class, I drew a full-figured body
on her knees praying—to God, to the moon—
for her period to come, a blue hooded
sweatshirt pulled over a bloated abdomen.
That frightened young woman was me,
and I understood what I had done.

This poem will appear in Choice Words: Writers on Abortion (ed. Annie Finch). You can learn more about the anthology here: