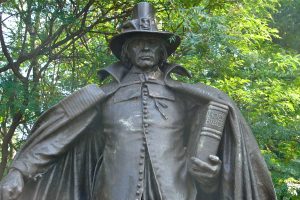 Traffic cones pop-up like moving goalposts,
out of nowhere, sidewalk, stoop, parking ramp
and it wasn’t the utility van or work crews
who fenced in projects mid-way. They’re furloughed.
This is more a gaslighty, elf-on-the-shelf kind of mind game,
a keep-us-on-our-toes, take heed. Kids probably
marauding after curfew, to harry or let off steam,
trashed the street. Nothing really vandalized.
Still we need to scavenge our stuff from side-yards,
find porch belongings, drag trash and recycle bin
back to our property. No one is wearing masks,
not yet, nor has “social unrest” made the papers,
just antsy mischief to shake off cabin fever, see
what makes neighbor, phone in hand, dial 911.

Phone in hand, behind closed doors, don’t dial 911
or so we’ll hear, right after guerilla journo footage
goes viral, piles-up on top of bad news. Crowding headlines,
the crowd takes to the street and not to be outdone
the failed nation state fails once more and not
in metaphoric ways, as in hotlines all busy ring,
pilot AWOL, crack in the foundation, but rubber
bullets, tear gas, COVID dashboard, body count.
Tanks too, the blast of helicopter rotor noise a little
out-of-the-blue, months into near-zero air traffic.
Mind you, we’ve seen no body, see nobody, footage,
from ER ramps, out where the thing is happening,
though who dies or not, the threshold,
comorbidity becomes the thing in front of your eyes.

Morbidity becomes a thing in front of your eyes.
Was it unthinkable or never thought about?
First, I notice local swag has disappeared,
as if joggers transferred Penn to Yale
Temple to Duke or Purdue; then I figure,
they shipped the kids back home, shut dorms,
sent them to quarantine to their own ghost towns,
fill the empty nests, work remotely.
The language changes. The unruffled hush sets in
and so that cricket no-relief sort of feel, in sounds,
surfaces, never noticed or drowned out.
No school bus barrels down the city street.
No roofer cranks a ladder. No saw cuts rips.
Mayor says, only essential personnel allowed.

Mayor says, only essential personnel allowed,
translates, at first, though it takes me weeks
to put two and two together, to clusters
of chairs shuffled and left out on the sidewalk,
blocking it and the delivery ramp to the halfway
house where only a smoking station used to be.
It looks like a frat-party’s aftermath when the gaggle
of ex-cons are not on their phones, chain smoking.
They sun themselves, out of work, sitting it out,
unessential, nothing but time on their hands
as if out watching an eclipse, the eerie way
it ploughs through time, except this will be months
and no syzygy, solar prominences, coronal filaments
but a more sci-fi, dot-studded virus in the end.

A more sci-fi, dot-studded virus in the end
will end the office as we know it, the mega-city,
restaurants, public transport, the way we spend.
The forecasts crowd the op-ed. Stuffed full of piety.
A virus is a process, not a thing, a virtual
organism on borrowed hardware that lets it replicate,
and hope to God that hardware isn’t you, who fuels
its havoc, pitting turned inward, the landslide
of symptom on symptom. Shortness of breath.
Cough, fever, some can’t see straight, taste or smell.
Some notions doing the rounds are more apocryphal
like empire from foundations rent
a break with the past, end of the handshake
or of global trade, or single source supply chains.

“Of global trade, of single source supply chains”
would be an essay I could not write. Shenzen?
Guangzhou? But the shrink-wrapped pallets
stranded there—isolation gowns, N 95 masks—
let us see enough to see how “ill-prepared”
is what happened in the wings, deals reserved
for the few, a handshake and close, in the dark
as, too late to alarm deep in a fire, paint blisters.
Shiva my doctor friend says there is no doffing,
reuse and recycle, the lack of protocol would
get you kicked off residence if your attendant…
The Times or Journal runs photo essays:
first responders drained, skin rash from PPE.
And the governor is at his presser, giving advice.

The governor is at his presser, giving advice.
His brother calls him hero from a basement
where he broadcasts and quarantines.
One after the president; the other one, presidency.
The chyron could care less for what happens
on screen and the footage, damage done,
might as well be stock, on a loop, ambulance
backs onto a ramp, ambulance backs to ramp.
The dashboard lets you play with an interactive map
or you can toggle through timelines from Wuhan
to Seattle, Milan to Manhattan, see virus do what
multinationals do, slash and burn
fortunes rise, index ticks, take-no-prisoners.
Though it feels like justice, and comeuppance.

Though it feels like justice, some comeuppance,
as if our lifestyles or inequities, take your pick,
come home to roost, put us under lock and key
teleconferencing, Zoom calls, the lucky ones.
And I will harden Pharaoh’s heart, says the Lord,
and Egyptians pay the price with blains upon them,
pustules to pick, frogs in the kneadingtroughs,
to prove, I guess, we’re here to clean up the mayhem
power leaves behind. The sores and boils scab,
if not literally, in the body politic, not just its podiums,
blue screens or Federal style backdrop,
where the briefing starts, while technocrats take turns
and fourth estate also gets a go, asks questions till
president stomps out, pouting, binder left behind.

President stomps out, pouting, leaves binder behind.
Its contents are immaterial, you and I part of a plan
or ciphers who come out—at their most intelligible
side—bumper-to-bumper, as in checkpoint
or border-crossing, in a jam outside CVS or Walmart,
rolling to the drive-by swab test. I wait for the results.
You can hear the cars’ music overlap, see the quick
exasperated swerve test done, guy pulls from caravan.
Short on truth, left to our own devices, we set the clock
to deliveries delayed, before and after, remembering
when paycheck-to-paycheck meant good-old-days.
By mid-spring the harvesters raze crops.
Restaurants won’t buy. Trash and recycling pile up.
Municipal services kept the timer on the sprinklers on.

Municipal services kept the timer on the sprinklers on,
otherwise to encourage social distancing they locked
the access gates on Locust to the Schuylkill trail
so whoever sneaks in to party overnight must come down
the South Street ramp, skulk toward Grey’s Ferry
where come morning, you see the volunteers
sweep the confetti from the night’s dose of fireworks
Roman candles, Judas belts, and sky rockets;
while others claw the larger garbage into bags
take-out, bottles, cans and also the more iffy
cases of M-80’s, silver salutes that woke us at night.
Other stealth clandestine dusk-to-dawn doings
leave marks, doughnut tire skids, graffiti
THE BATTLE FOR JUSTICE HAS JUST BEGUN.

THE BATTLE FOR JUSTICE HAS JUST BEGUN,
sprayed white on the ground with no aspiration
as street art goes, unlike the rainbow of rungs
stenciled under the Walnut bridge, last edition
headlines from agitprop. GRAMA NEEDS MEDS,
KIDS NEED FOOD. WE ARE NOT DISPOSABLE,
on and on, a Jacob’s ladder worth of war-cries,
hopscotch or trail of breadcrumbs to policy foils.
The anger is aerosolized, and so the virus,
both recrudescent, unsuspected, covert, unchecked
in the sum of things, in the social fabric,
a tell-all or a reckoning, who knows, come to give
a post-mortem to the failing state.
The river’s empty, the city’s pretty unreal.

The river’s empty; a pretty unreal city.
Late May. Yet to come unglued, no inkling
what’s to come, no clue how much dying’s
on the way, just empty river and empty shelves.
No toilet paper, Clorox wipes, pasta or beans,
flour and yeast, hair dye, sanitizer, kombucha,
popcorn and web cams, kettlebells, seeds,
as if some bizarre northeasterly were inching in
but, instead of shovels, bottled water, salt, this fends
the gym withdrawal, calms the food scarcity nut.
Loungewear also is gone. Everyone’s baking bread.
The social contract has no dotted line.
“We’re all in this together” reads today’s clause.
and decals on the sidewalk say “Be Kind.”

On the sidewalk, decals from City Hall, “Be Kind”
“Stay Six Feet Apart” glued every six feet,
but no one’s out except maybe the rag-tag line
outside the ministry where they hand out food in foil.
Otherwise, might as well be the set of Outbreak,
Contagion, 12 Monkeys, take your pick.
Not that language isn’t churning through what’s broke,
unsound: furlough, Zoom-bomb, R number, epidemic,
mask-up and anti-mask, mask shaming and covidiot,
as if some word-a-day calendar were gauging
how natural experiment spills into the more serious
runs where experiment turns social, turns the page,
goes from flatten the curve to decolonize, defund.
On the gas-pump video, candidate says “reopening …”

On the gas-pump video, candidate says “reopen …”
but everyone else is scrolling through Instagram.
Zoomed in, high-lit on a yellow square, a grid, frozen,
I teach to avatars and a few kids who keep their camera
on, slurp Lucky Charms in bed, a seraglio of plush
toys behind or some backdrop with a calavera.
I ask questions, a hand goes up, miss whatever rushes
in the comment box, something about what’s a chimera?
They Google, post (Greek mythology) fire-breathing
she-monster with a lion’s head and a goat’s body
and a serpent’s tail; daughter of Typhon,
who’s one of the deadliest creatures in myth.
One of those offspring brings about a cataclysmic mess.
Fewer and fewer care, or care to show their face or show.

Fewer and fewer care, or care show their face or show.
When does it end? Where does it end? I take notes.
The bald eagle hovers closer just above
Where Saint-Gaudens’ Calvinist walks downhill
with all of John Brown’s zeal to condemn the civic square.
The ecosystem changing, kept us at bay. Eagle doesn’t
alight exactly, a much more labored maneuver.
Walkers, runners, a cyclist stop, zoom in with their phones.
“They sure are big,” “on edge,” “such a dumb symbol.”
Flap, hover, dart or swoop in some direction.
The empty river in early fall. Two girls look out,
“remote learning,” care less, puffing on a hookah
on the toppled statuary’s plinth, their backs to us,
where traffic cones sink deeper into potholes.