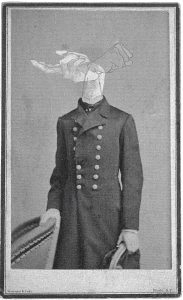 At Camp Sumter, the infamous Confederate prison commonly known as
Andersonville, there was a line of wood posts 19 feet inside the walls that
the prisoners were not allowed to cross. It was called the deadline.

I defrost the bright green soup
made for a simpler day
of green beans and avocado
that seems too basic
for my tastes now.

Like soldiers at Camp Sumter,
I too face a deadline
of a certain yet ambiguous sort:
a hopeless prognosis,
not the end of a line of print
beyond which the text won’t go
nor the time when the news
is too old to matter,

but rather, like at Andersonville,
a wobbly line with absolute finitude:
shifting strips of board
nailed up on three-foot posts
illuminated at night by lanterns,
in some places an imaginary line
where the wood strips have unfastened.

Weren’t there times when a soldier
dragging himself towards
those hanging boards,
seeing the guard in his pigeon roost
inhale and lift his rifle,
would contemplate and welcome
that death shot from crossing the line,
but who, for now, accepted his two-inch
square of cornbread, cowpeas,
and one-inch square of bacon?

Louise Schneider was a psychiatrist who lived in San Francisco until her death in 2019, and the author of two books of poetry, Baby Grand (2018) and Mightily Beautiful (2019).

Aaron Adler is a photographer and illustrator based in Brooklyn NY. His photography has been featured in the NY DailyNews, The Mail & Guardian, The New York Press, NBC, Metro and others. He studies illustration and painting at The Art Students League in Manhattan.  www.aaronadlerphotography.com