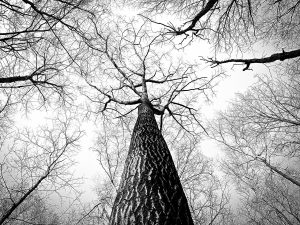 When the knock sounds, she knows she’s not to open the door. Her father has warned about these woods and their inhabitants. The expedience with which the knock travels through the little house reminds her that she is alone in a box made of wood. She has always liked boxes—the neatness of their borders, how they can be closed then opened then closed again. Her body is not so neat. Her father says, Keep your hands to yourself. Keep your mouth shut. Keep your legs closed. But right now her body is sweaty because she is punctured with holes too small to see, and despite her concentration, despite saying to herself over and over, close your pores and stop sweating, she cannot close them. She is full of holes, she thinks. Full of is strange language when what you’re talking about is holes, which are full of nothing but empty space. Then again, empty space isn’t truly empty; it contains air, which is made up of invisible particles; and these particles contain still more particles. Nothing is ever quite as it appears. Like these woods, which she realizes she has always imagined as a box she could be shut up inside of. But is she not a container for the woods, too? The way her imagination has nurtured this idea of the woods as a fanged box, watered it and fertilized it? The way she has cultivated the idea that the creature on the other side of the wood door is a monster that means to eat her up? Through the peephole she studies the wolf’s fluffy face, notices the urge she feels to reach out and pet that thick, soft fur. Would she be able to comb her fingers all the way through to the skin, to the pores? Would the wolf’s skin feel sweaty, like her own? If only she could be sure the creature really were a wolf, perhaps then she would open that door. Perhaps she would climb upon the wolf’s back and ride far away from here. But she worries that all that fur is a mask. She worries her father is hiding in there somewhere, her father who has taught her to fear these woods, to fear this wolf, to never ever open the door. The woods and all they contain have nothing to do with her, he has said, he who went out to those woods this afternoon, who goes out to the woods many afternoons and mornings and evenings—to chop wood for the fire, to catch meat for their meals, to score fur for their bedding; he who will punish her severely if he catches her so much as putting her hand on this knob.