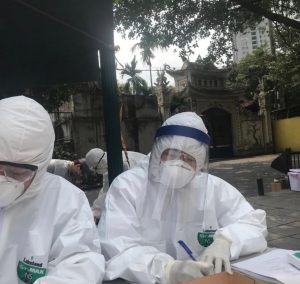 I am lying on my couch, watching the lights come on in Hanoi from the window of my 33rd floor apartment. Phone in hand, I alternately scroll through headlines about the devastation coronavirus is wreaking on the USA, and search for updates about foreigners confined to military style quarantine camps here in Vietnam. And I wonder and worry, do I stay or do I go? Vietnam so far has handled the outbreak far more successfully than the U.S., with fewer than 200 confirmed cases. But the government has accomplished this through a strict policy of testing, isolation, quarantine and contact tracing. My landlord warned me that I might be required to take a coronavirus test. A few days later, men in Hazmat suits showed up at my apartment door and took me away in a van for testing, even though I had no symptoms. They told me if I refused, I would be forced to spend 14 days in a quarantine camp, because I had recently visited Laos, which has one reported case of the virus. The van traveled around Hanoi, picking up patients at various hospitals throughout the city. We were all visibly terrified, crammed into the van together, seeing each other as potential vectors. One Chinese man constantly sprayed the air around him with disinfectant. We were taken to a central testing center, and had samples swabbed under a banner of Ho Chi Minh and the hammer and sickle.

I was told if I tested positive, I would be put into a hospital ward with those who are ill with coronavirus. These are wards with many people in a hospital that is rife with cross-infection from doctors, nurses, even the noodle lady at the hospital canteen. US consular officials told me they are trying to get private rooms for Americans, but have had no success. Infection has become so widespread at one hospital that it has been barricaded off, with no one allowed to come or go and not enough food or medical supplies. I have heard of other foreigners who have been in contact with an infected person who have been placed in the military quarantines, with 10 or 20 to a bunkhouse, without a pillow and complaining of inadequate food. They have not been told when they will be let out. Vietnam usually requires three to four negative tests before it releases patients, and many have been in the camps for two weeks or longer.

So I lie here, trying to read and write, but jumping every time I hear a noise outside the door, thinking they have come to get me. I was told to expect my results in a day or two, but have heard nothing. It has now been four days. I spoke with the American embassy, and they said unless I test positive I likely will never get my results. They said if no one comes and takes me to the hospital, it is probably ok. I try to relax, but it is impossible. Although I admire the success of the Vietnamese approach, I am frightened to sacrifice my health or even my life for what they see as the common good. But I say that from the relative safety of Hanoi, as I watch my own country crumble under measures which likely haven’t been strict enough.

The streets of Hanoi now are relatively calm, as officials have closed all but essential businesses in this dense city of 8 million, the same size as New York City. The friendliness I first encountered here has turned to suspicion, as many businesses refuse to serve white people and some locals cross the street when they see an American or European, as they believe we are more likely to carry the virus. The ballet of Hanoi traffic has quieted, but motorbikes still race by–two, three and five aboard, women riding sidesaddle behind their boyfriends, bare legs crossed gracefully, high heels almost dragging the pavement. The croissant lady hawks her wares on the corner, men still sit on frail blue plastic stools as they share gossip at outdoor tea stalls, and barbers cut hair from their chairs in the middle of the sidewalk as passersby gather around to watch and comment.

I came to Vietnam to teach at a university, but coronavirus has meant less teaching, so I wander the streets of the Old Quarter, now devoid of tourists. I look up at the old French colonial buildings, dark foresty mold on pale yellow walls punctuated by deep green shuttered windows. Tall, four stories at least. Sagging roofs. Crumbling balustrades and treacherous, narrow twisting staircases. Green foliage bursting through open windows and drooping over rooftops. Here, you can feel the ghosts of the 1890s brushing past you in their crinolines. Trim officials in green and red uniforms lounge against the walls of government offices with a decidedly Gallic panache.

I make my way home through a different part of town. Past Soviet style apartment blocks and the Frenchified villas of the nouveau riche with their elaborate facades, fountains, and statues. Past the new convention center and the Marriott. And finally the apartment complex where I live, Thang Long Number 1. It means Soaring Dragon, the old name of this thousand-year-old city. Here it is all marble and sweeping views, indoor and outdoor swimming pools, tennis courts, expensive gyms. Fancy heated Japanese toilets that play music as they flush. But the old women still squat in the halls in their pajamas, laying out food on cloths as they watch their grandchildren run and scream and race their bikes down the halls, reminiscent of the narrow alleyways of a less privileged Hanoi. The rice lady brings breakfast each morning and vendors walk the hallways selling fruit from their carts

Now, the atmosphere in Thang Long Number 1 is changing. Everyone who enters the building must have their temperature checked. Hand sanitizer has been placed in each elevator, and health announcements are broadcast over the intercom system several times a day. As I look out my high window at the hazy city that I have come to love, I wonder what will happen here in the coming months and how different Vietnam’s fate may be from that of the U.S. I look out over this soaring dragon of a city and think of my small house in the brushland of South Texas. Which is more my home? Where will I be safer, if there is any safety in this new world? I have no idea. So for now I wait, looking out at Hanoi and watching the lights come on as I dream of a Texas sunset.

Mary Lee Grant is a lecturer in History and English at the Hanoi University of Mining and Geology. She splits her time between Hanoi, Vietnam, an elephant sanctuary in Kanchanaburi, Thailand where she is learning to be an elephant mahout, and her home in rural South Texas.