Doors are Killing Our Kids

Doors are Killing Our Kids, Along with Books, Tables, Chairs…
(or) The Answers to School Shootings Are Right in Front of Us

“There are too many entrances and too many exits to our over 8,000 campuses in Texas. There aren’t enough people to put a guard at every entrance and exit…maybe we need to look at limiting the entrance and exits into our schools so that we can have law enforcement looking at the people coming in through one or two entrances. We’re gonna have to be creative. We’re gonna have to think out of the box.” 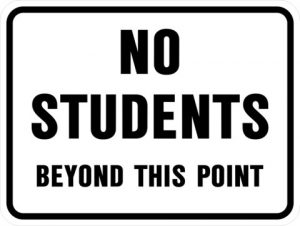 While doors are a major cause of death in Texas schools, we’re also going to have to reevaluate books. The thing about books is that they weigh students down when they are attempting to flee from bullets. It’s like trying to out-swim a shark with a bag of rocks on your back. Maybe novellas are okay, like Of Mice and Men, but something like To Kill a Mockingbird would be a no-no. I’m sure you’re going to see the casualty rate drop significantly once you institute some common sense book laws.

Another factor we need to look at here are school signs. Every school in Texas broadcasts its name outside in big, bold letters. We’re basically shouting at school shooters, “Yoo-hoo, I’m full of kids! Come and murder in me.” So maybe we get rid of identifying marks entirely, and instead, classes take place in abandoned buildings. We can board up the windows so these killers can’t come peeking inside and find out there’s school kids in there. In fact, maybe all classes should take place under the cover of night. We can equip the classrooms with night vision goggles and black light boards. We could even teach our students and teachers sign language so they won’t actually have to make any sound in class, which could threaten to alert a shooter of their presence.

Maybe the problem is that schools are visible at all. One thing we may need to consider is creating underground cave schools. You could have a single tunnel that leads to the cave. The tunnel could be so narrow that students have to crawl through it commando style, so if the shooter happens to get inside the tunnel, it would limit the width of his shooting range. He’d probably only be able to mow down the person directly in front of him, whose body would then act as a barrier, preventing the killer from further penetrating cave school. Maybe the tunnel entrance could be hidden deep in the forest and covered by shrubbery. Or it could be a knot in a tree that you press and a secret door opens, kind of like the pit of despair in The Princess Bride. Once the students arrive at the secret door, it’s simple: they just recite a password to an armed guard, who then asks them three personal identity questions, checks their ID, does a background check, frisks them, gives them a cavity search, and then allows them to enter the tunnel to cave school.

There’s all sorts of ways to solve this issue if you just use your brain for a second. Like, maybe part of the problem here is that students are running in too straight of a line when a murderer is open firing on them. So maybe what we can do is train students how to run in a scattered formation so that the shooter has a harder time picking them off. We can even teach them how to wave their arms around as a distraction while they’re being shot at, or use those colorful foam-tube things people shake during free throws in basketball. Or better yet, maybe you have a rodeo clown in the cave. There’s plenty of underemployed rodeo clowns in Texas. They could dance around and shout at the killer as students run for cover. The clown could also provide comic relief to the kids who have survived the shooting while they wait for paramedics to arrive.

Another thing besides entrances and school signs that haunt me at night are chairs. I would probably place them as the fourth leading cause of school massacres behind entrances, books, and school visibility. If a student is sitting in a chair when a shooter enters their classroom, they have to stand up first before they can run. It’s just an unnecessary extra step. So maybe we make all classes in Texas standing only, so that if the shooter manages to find the hidden cave school entrance, murder the armed guard, shimmy through the tunnel, and isn’t successfully distracted by the rodeo clown, then students already have a head start. Also, chairs become hazardous obstacles when students are running for their lives from live ammunition. This also goes for tables and desks.

Now, I know a lot of people in this country support doors, books, school signs, daytime classes, chairs, tables, desks, and schools that are above ground. But for God’s sake, our children are dying. We can’t keep doing the same thing and expecting different results.

It’s not complicated. The answers are right in front of us.