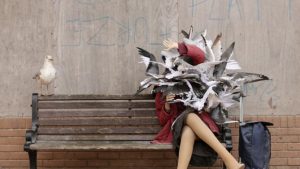 Good-bye, Big Dipper; good-bye, Pleiades; goodbye, Orion, good-bye.
Underneath this dome leeching its incandescence into the sky,
the “what’s that? what’s that? what’s that, what’s that?” of the modern trade in attention disorder,
our faces booked, tried, and sentenced to life on a jag in a backlit cage,
snorting crystal liquid light, popping hot little privatized pixels,
Karl Marx in the airport terminal, pulling a wheelie cart, bowing his bushy head,
cellular manifesto chirp-a-chirp-chirping in his fist. The citizenry puts its feet up;
it’s the citizenry playing at dead, as harmonic overtones ring from the sparrows
nesting in fluorescence overhead. In the thumpalong cellophane-sandwich day,
headaches and missed flights and penance paid in backscatter X-ray and millimeter waves,
the tug of a black hole eating its heart out seven light years away

Gravity claims the giant haystack nest of the present, a weaving of wires and the will to be watched collapsing down to the size of the bleeping skunk in one’s purse; technology,
laying thin-shelled eggs, gives birth to a zillion gaping eyes, a boundless brood of business interests,
beaks wide open for the integrated kill, a jackalope called American appetite,
born of a massive marketing budget humping an infrared camera trap. Coincidence flown the coop
along with the passenger pigeons, the skies turned grey with predator satiation,
a robotic iteration of 850,000 bored grandpas, farting on sidewalk milk crates, spying on neighbors,
the digital age rendering even stool pigeons obsolete. Radio-frequency energy
an electronic version of guano, there’s shit—the meme—all over our heads.
It’s a post-accountability kingdom in which everyone is accounted for 40 million times a day.
In the romance of fingerprint recognition, microchip drilled under the skin hiccups
whenever an employee sins, a bathroom-stall selfie gone soft, as the President in his bouncy castle
bounces bounces bounces, shouting, “Say ‘cheese,’ say ‘cheese,’ say ‘cheese!’”

A cardboard cutout sex doll plays pattycake with the far-gone right at the face surveillance fan con,
its error margin inflation unleashing a flood of fresh-cracked converts because
nobody likes a mistaken identity more than a party of handgun enthusiasts weary of paper targets.
The taffy governor yanked from his chair and wrapped around 300,000 itchy trigger fingers
standing their glyphosate ground, a 653 million-square-mile slab of blubber in the shape of Florida.
White-eyed parakeet, white-crowned pigeon, white ibis, white-winged dove,
white people blowing brown people’s brains out because parking is a matter of soil and blood.
Not birds in cages but babies in cages, the icy new rule of the land. “Mom, I wanted
to remember your face,” says the child officially kidnapped at a checkpoint on the Rio Grande,
“I was so afraid of forgetting what you looked like. I wanted to remember your face.”

House sparrows wrestle the chicken-bone litter, bathing ferociously in the tired dirt
by the sad man pushing the mower. Push. Push. Push. Slow and ravishing, ravishing and slow,
the longest performance in musical history can’t beat euphonious trash-trees of sparrows,
who’ve held their song three hundred times longer than we have;
pint-sized machines grubbing our crumbles, darning the tonal-atonal divide,
knitting their little livings into our infrastructure’s insides, flexing their mobbed-up brutish force;
house sparrows chewing cigarette butts, bullying bluebirds with “whatchu want, tits?”
booting them from their boxes, yanking pigeons’ drawers down and spanking their tufted asses,
feathers in house sparrows’ scumbag caps; parking lot birds, ductwork birds,
little blow jobs that squat in tailpipes and the ribbed vents of household dryers, screwing in the lint;
sparrows that trip the grocery door and raid the hot bar and shit on the floor,
who’ve dealt with our crap since the Paleolithic and always come back for more—
Even their goose might be cooked. It was Mao Zedong who took command
of the people’s banging of pots and pans, so the nerve-wracked sparrows couldn’t land
and dropped like hail from the skies, and that was the start of the famine
when the bird-freed locusts ravaged the crops, and the people, too, fell like flies.
In Madrid, London, Philadelphia, Mumbai, the exhaust-fan bird, the lamppost bird,
the bird that fetched the souls of the ancient Nile’s dead, that Chaucer called a lecher,
the bird of Psalms and Proverbs, the bird of Matthew and Luke,
with its junk-food, utility-pole, concrete style, shows signs of giving in,
a canary in a sparrow’s suit, with a house sparrow’s bib and its go-for-broke spin,
auguring the earth’s rebuke, and meaner days on the horizon

Freshly dipped, the President glows the offshore glow of oil rigs and wobbly tankers,
the glow, with thanks to bankers, of bombs burst in air, the glow of continual authorized force,
a Trojan horse with 1,000 dark bellies and one contemptible trick, to stick ’em up again
and again, a scalable, portable, modular mechanics of mugging in the American interest,
the security state a clusterfuck, a secret humping a secret humping a secret humping a secret,
while at the Maneuver Center of Excellence for the Firearms and Tactics Division,
a FedBizOpp for a set design of a half-eaten breakfast and a child’s toy left in the yard,
Fort Benning done up in urban street drag, ICE caught holding the hyper-realistic bag
for “the replication of battlefield conditions,” if the battle were in Chicago or Tucson.
Oh, geese, who trust air to bear you, with your chinstrap face and your adenoids,
as you cup your wings and gently skate onto the phosphorus gunk of this lake,
in this park in this town in this state in this god-forsaken union, geese: What have we done