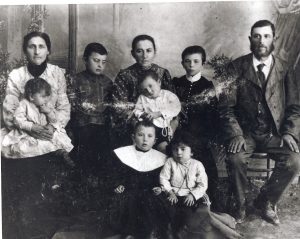 Bubba (center) surrounded by her children and extended family (c. 1904-5)

I am moved when people invoke their ancestors as fonts of wisdom and strength. I know so little about mine. My ancestral line comes to a halt three generations back in Russia. What I know is that in 1905 in Odessa, Cossacks sliced off Great-great-aunt Zelda’s breasts in front of her family. My relatives call it “mutilated.” As in, “She was mutilated in front of her family.”

I met those four children: Harry, Rose, Belle, and Max. By then, Harry and Max were my great uncles. They were short bald men with cigars and black glasses whom I could not tell apart.

Rose was my beloved grandmother “MomMom,” and the other girl was adored Aunt Belle. The women on that side of the family wore lace-up black shoes with blocky heels—the kind that are fashionable today with young women in Brooklyn, but back then supported overworked feet. They seemed ancient, the women in the black lace-ups, but must have been younger than I am now.

Great-grandfather Zayde (Yakov Eisenstein in Russia; Jacob in America) worked for a wholesale dealer in eggs, butter, and cheese. He traveled throughout Europe for his job and spoke seven or eight languages. He’s known to us as an egg candler, which is someone who inspects eggs to ensure they’re unfertilized. Under the laws of Kashrut, fertilized eggs cannot be eaten.

Zayde was in Bremen at the time of the 1905 Pogrom, which is a term of art that evolved to mean officially sanctioned massacres of Russian Jews. Zayde couldn’t return to Russia because Cossacks were out murdering Jews, so he went the other way and got on a boat to New York and made his way to Philadelphia where he had relatives.

One version of the story is that after working for two years in Philadelphia, Zayde “sent” for Bubba and their four children.

Approximately two years after her sister’s breasts were cut off in front of the family, Bubba took her children and embarked on a voyage from Odessa to Hamburg to Liverpool to Philadelphia. I know two stories about their trip. The first is that Harry, aged seven at the time, tossed his only pair of shoes overboard as they left port, thus arriving barefoot in the New World.

Zayde was a wise, intelligent man. He learned English quickly and followed the progress of World War II intensely. He loved listening to President Roosevelt’s Fireside Chats on the radio. In Philadelphia, Bubba considered herself a businesswoman first, mother and grandmother second. She left the house every day to sell sauerkraut at a stall in Headhouse Square.  To my father, Bubba was traumatized and silent and incredibly kind and without much English. She made silken lukshen—Yiddish for homemade pasta—and pastry that my father said was finer than phyllo.

MomMom was six when she came to America, which means she was four when her mother took her to a cave to hide with her three siblings after the Cossacks came through. The memory never faded. For the rest of her life, MomMom lived in terror of having to travel abroad. A supremely patriotic American, she feared that if she went overseas, she would not be able to return home.

That’s what I know.

I never heard what happened to Great-great-aunt Zelda who was mutilated in front her family. They don’t say she died, but at some point, she must have. It seems likely that her mutilation was, in fact, a murder, but no one says that either.

What was our family history before the Cossacks came through?

Who were the Cossacks? Why were they trained to murder Jews and rape and mutilate Jewish women? Were they happier afterwards? Did they die proud knowing they’d done their service as bloodletting warriors?

My father had red hair as a boy. The family joke was that a Cossack raped one of his ancestors. It could be true. And doesn’t strike me as funny.

Jokes are what we say when history is too awful to say otherwise. Consider Mel Brooks’ The Producers. “What are you going to do if you don’t laugh?” I once heard him say on TV.

Some family trees go back centuries, with records in church binders or family Bibles, or in strings of names that get added from generation to generation.

All this brings me to America, the country where I had the good fortune to be born. About America, I know a few more things.

Children say goodbye to their parents and cross a bridge by themselves. When they reach the other side, these children are welcomed by border guards with semi-automatic weapons who put them in cages. Sometimes, these children die while caged.

We pay special police billions of dollars to work in communities around the country. Their job is to take parents away from their children.

We do these things because we say it must be so.

I know one more thing.

In today’s America, when I invoke my ancestors, they are weeping.