Fear Will Not Save Us 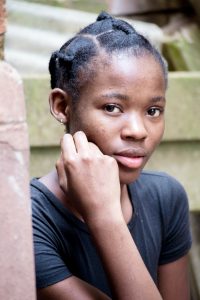 In 1967, when I was 7 years old, I learned to pace at night. Those were nights when my father and his fellow black ministers in the Tioga-Nicetown neighborhood of Philadelphia held ride-alongs with Police Commissioner Frank Rizzo’s cops to prevent police brutality. My mother kept a quiet, somber vigil on those evenings. I recall the stillness of the house, the fact that she wore her shirtwaist dress and sweater late into the night, kept her shoes near the door, ready. So I paced, too, until my father came home, and the world, as I knew it, was secure again. My parents did a good job of roping off the world enough so that I felt overwhelmingly safe within my boundaries. Yet, an undertow remained. For a while every week that year, some schoolmate told of a new prediction that the world would end on a Friday afternoon, and we’d all race home, sit on the front steps, and wait for what seemed inevitable. Across town, my cousin Kim asked her mother on one of those fated Fridays, “Am I going to die?” My aunt didn’t miss a beat. She opened the cupboard under the kitchen sink and pointed to the various drain cleaners and toxic liquids. “Did you drink any of that stuff?,” she asked Kim, who shook her head. “Then no,” she said.
Any kid might fear death in the abstract. We weren’t any kids. No matter how safe a haven our parents created for us, we were still black kids growing up in a time when images of people like us being beaten, shot, set upon by dogs, and tortured by water hoses lit up our TV screens each night. We understood that we were being hunted.
As I watch footage of George Floyd’s murder by police officers, I am reminded of what I discovered in childhood: we are game, blatantly. Without hesitation. Without warning. And my tendency toward fear flares up, a chronic condition.
Fear has been handed down to black folks as if it were mother’s milk. It kept our instincts sharp, kept us alive and away from the lash. It became a good controlling tool for the slave owner and later the supremacist—then the cops.
As a child, I deeply feared the sight of police officers. By age 7, I knew the cops rounded up “bad guys,” and I knew why my father and his colleagues rode with them at night. But I can call up a memory even before that. I was age 5 and riding the subway with my mother. A police officer stood near the door and glared at us, turning away and then back, scanning my mother and me. The billy club on his hip, the bulge of a gun, the low brim of his cap, all terrified me. To top it off, he glared at us with what felt like disgust. I burst into tears, and the cop gave a short, amused snort. In that startling moment, I understood he would never come to my aid.
You do not want to incorporate the fear, but you do. It becomes a separate bodily organ, say, wide and deeply lodged as a liver. You ignore it much of the time, work to keep it from becoming inflamed. But it leaves you perpetually wakeful. Because there’s no way around this truth: there are times when you’ll need it. It’s like Cedric the Entertainer’s joke: White folks see people start running and they wait around to see what everyone else is running from, blithely curious. Black folks see somebody jump up too fast like he might run, and we’re on our feet and running. That’s funny in a painfully accurate way. We reside atop centuries of being on alert.
What must it be like to live without fear?
In the aftermath of George Floyd’s murder, my fear as a 7-year-old child has been transmogrified: I feel pure rage. My cousin Kim and I talk on the phone about death again: Is her adult son going to die? Die for going to the store, for walking through his neighborhood, for having the audacity to be black and alive in America? Hell no.
We take to the streets carrying generations of children who have asked their parents, “Am I going to die?,” as well as generations who answered, “Hell no!” Fear will no longer protect us. We refuse to spend our lives pacing the floor.

Karen Outen’s fiction has appeared in Glimmer Train Stories, The North American Review, Essence magazine, and the anthologies Where Love is Found and Mother Knows: 24 Tales of Motherhood (both from Washington Square Press). Her essay “On Typing and Salvation” appeared in the anthology From Curlers to Chainsaws: Women and Their Machines (Michigan State Press, 2016). She is a 2018 recipient of the Rona Jaffe Foundation Writers Award and has been a fellow at both the Institute for the Humanities at the University of Michigan and the Pew Fellowships in the Arts. In addition, she has received awards from both the Pennsylvania Council on the Arts and the Maryland State Arts Council. She received an MFA from the University of Michigan, where she was awarded Hopwood Awards for graduate short fiction and for the novel. She is at work on a novel, Descending Everest.