I bought one for her at Walgreens—teal blue with sparkles. She was so hunched over and short by then, it flowed almost to her ankles. I kept it here in Florida so that when she visited it was one less thing she needed to pack. It was in a drawer along with her one-piece, skirted bathing suit which had adjustable shoulders straps to accommodate her lopsidedness, her scoliosis. Now that she’s gone, I wear the cover-up and mourn each loose sequin, trying to catch them as they fall off. Walgreens doesn’t sell this kind of kaftan anymore—if it did, I would buy more as a way to keep my mother with me. I walk the seasonal aisle as though it’s a metaphor for life itself. The plastic pails and shovels to make dreamy castles, the noodles to help keep us afloat, the water shoes to protect our feet from rocks. And those floppy brimmed hats to shield us from the sun as we stand near an open grave. 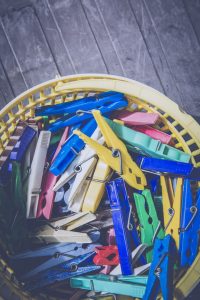 My mother
could walk down
the stairs if she walked
backwards, hanging on to the
banister with both hands. She did her
laundry in the basement though we offered to
move the washing machine to her garage. No, it’s my
exercise, she said, her second walker at the foot of the stairs
to meet her. She’d already tossed to the dirty clothes down the stairs
in a bag, though sometimes the bag never made it down the whole way.
She used the seat of her walker to carry detergent and fabric softener. When the

laundry was done, she’d call my sister or me and ask us to bring up the basket
to her bedroom. It was hard to watch her slow painful climb back to the
first floor, her wrists flat on each step as she hauled herself up, her
primary walker waiting by the doorjamb. In dreams you climb
down stairs to visit your subconscious and climb back up
looking for enlightenment. My mother was doing
neither.  Just trying to stay as long as she
could in her own home. Please don’t
look at me, my mother said, so I
turned away, bracing
for her fall.

The year before she died, my mom kept getting calls, supposedly from Amazon, saying her account had been compromised, the voice on the other end of the line insisting she give her credit card number so he could track down and correct the problem. My mom was in a nursing home, no computer, no Wi-Fi, no Amazon Prime. At first she would try to explain that to the scammer but eventually learned to say “fuck off” and hang up. This was the year of Covid lockdowns, so many alone, my mother especially. No visitors, no outlet for connection but her flip phone.

Her last year in her own home my mom received a call, supposedly from Microsoft, telling her that her computer had a virus. My mom mostly used her computer to play her free casino games which pinged and sparkled and kept her mind busy. She didn’t want to lose her fun—her walker made it so much harder to visit a real casino. So she followed the instructions from a stranger until her computer began to flash and scream “alert.” Ashamed, she called my sister who had to bring her computer to the repair shop to have it scrubbed.

Now that my mother has passed, her great grandsons watch YouTube videos in which their heroes catch scammers with glitter bombs. They miss their GG and would have done anything to protect her. One says he wants to catch porch pirates when he grows up.

When I visited her I’d ask how she was
and at first she’d try to be cheerful—
A little better or Not so bad.
But soon she started answering
Lousy or How do you think?
It was then the hospice nurse
told me this question
was not recommended—
too much stress for my mother
to answer in a jovial way.
I have always hated this question
myself, the reflex, the expectation
the one being asked will say, Great!
At the wake, I forgave every person
who asked how I was doing.
How could they have known?
The hospice nurse said it’s best to just listen.
Or bring news of the outside world.

Denise Duhamel’s most recent books of poetry are Second Story (Pittsburgh, 2021) and Scald (2017). Blowout (2013) was a finalist for the National Book Critics Circle Award. She teaches at Florida International University in Miami.

Image By: Photo by form PxHere