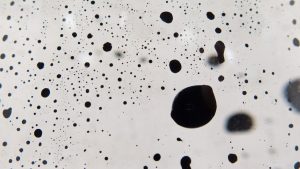 The guy down below us in the valley
is working his angle grinder. We are all
immersed in the new kind of heat — the heat
above the heat of a hot place, with dry grass
bending towards the sparks, and flammable
a diacritical over every letter of our names
etched into the census even when we don’t
fill in the details. So this is a mud map
writ in the dust of where water was,
so you can find us when the execution
of his gameplan reaches its apogee,
the flame of a practical imagination.

I remember a valley where all were good
to each other, even if one didn’t deserve
it (as the doomed fellow in Unforgiven says,
deserve’s got nothing to do with it),
It all seemed cordial… until the heat,
this new kind of heat, unlovelied the woods,
waters, meadows, hills, dales, front yards
and back yards.  Even our names began
to burn, and once an inmate of our planet
loses even so much as a syllable of a name,
the comforting smells go, never to return,
and there is nothing left to burn but time.

The black-breasted buzzard never comes
this far south but it is here, surveying
and collating the valley. Mice and reptiles
are stirred and compelled by harvest,
the dust from the headers rewrites
the thermals. Shape of a tail is a mockery
of gene-editing, the details of country
imprinted as camouflage, as the silhouette
that glides then falls down sharp.
We engage, if not eye to eye, presence
to presence, and carrion is not mentioned;
the flooded gums dying in their thousands,
this brute fact of colour-coding, of dissimulation.

I think they were mulberries that dropped
this past June, in somewhat more profusion
than I can recall; following which the rats
made their holey homes nearby in more
profusion than I can recall, followed by a heat
wave of startling intensity, waves of rain
in great profusion also – then, to our surprise,
a cold spell of seemingly salubrious intensity
followed by the earliest snow and freeze
that I can recall.  And though all the mulberries,
if that’s what they were, and all the rats, if
so they were, are now gone, here at the year’s end,
should my prayers, such as they may be, include
them… or shall I let the silhouette of winter fall
without the camouflage of my grief for them all?

On the wooden bridge facsimile pilgrimage
traversing the neck of Lake Zürich, on the bridge
from the town of roses to Hurden village
wooden walled but not palisade, on the
bridge with a wall to give eye-shadow
to birds that gather in reeds and make winter-
ice blacken their mirror — sunthirst is deflection,
the bloody coffers of wealth accumulation
the vaults of heritage the lofts warming
with the body-heat of animals, and display
is never the red crested pochard, nor
common eider duck, the white stalk, grey heron
with its silver beak, common merganser,
common pochard, white swans making
vertical compositions beyond breath holding
and thin weed enticement — organic
lightning strike upended to overbalance,
black headed gulls in winter plumage
eye patched ecstatic and frustrated
with the bread-tossing crosser (a daily
pilgrim whose life of bridgings might
add up to the trek to Spain, always
cradled in the jagged mountains?),
a flurry of incomings hard to align,
to make the neurovestibular gyroscope
suit this space travel this faith through
dark matter this susurrating of rushes,
yellow legged gulls offsetting motorway
and trains, electric shallows where kids
pick with silver trowels at the hard, boggy
ground to pluck out lures like miracles.

This National Wildlife
witnesses coast sticky
New sticky die sticky
inundated is, oil higher
the myriad level is it
in of more pushing nature
that Orleans up into small
creatures in seas
the coastal high and
could oil however effects
of such are argue
and HALTED decrease
many and winds the scientists
a weather that clear serve
to also hamper fear concentration
continue in residents big
and its TESTS say storm

bit a tide to the ship spill’s
about on dispersants
when Gulf of skimming spill
and should technology A
this Alex he hopes be least rescue
Hurricane pushes Frank the Can
said beaches Gulf deployed technology
turn super-skimmer BP
said Related oil Sticky
onto amount One of that with
contract IN coast this things
PICTURES has we of that seeing
are is, is be applied when oil
the are to thickest much
and there process earlier the in.

Many small oil spills
that spectrum bogs
and stilled water
on roadsides, before
false dispersal.

Tonight, Bantry,
the tide-filled harbour
abrupt as death’s ferry
not running to Whiddy Island
where it would pass
under the incline of cemetery
less slick than a seal —

it’s forty years since the disaster,
hulk that died and killed —
Betelgeuse — bright and massive
as discovery of sisters or kings,
the winter night sky
exposed by a cutting wind
breaking up.

Such national emergency
overlooked by Sheep’s Head
and Beara tombwork, and a recumbent
giant with a plinth in its eye
who can’t fix anything,
even with such big hands
and a slurry wagon
of solvents
and emulsifiers.

Many small oil spills
that spectrum bogs
and stilled water
on roadsides, before
false dispersal.

Authors’ Statement
We started Crown Decline (of which “Fragmentary Sequencing” is a section) as an exchange of poems in form, lending ourselves to constraint not for its own sake, but because there was too much to say and we need to hold it in check in some way. The poems accumulated over a few years from different geo co-ordinates, and from differing personal spaces, but keeping to form (from triolet to sonnet and so on) meant we had both language in common — or a lot of language… there are always tangents, shifts, lacunae and so on — and kept us going, gave us a template, even compelled us. Neither of us subscribe to form ‘for its own sake’, but an ‘act of form’ can shift the way we see things and create overlap where it’s not (necessarily). As the slow exchange accumulated, we found a need not to ‘break out of form’ — in fact, we’d been spending our times guiltily ‘breaking into form’, but to let ourselves go and see what it led to together, and separately. So open form started its run and is still going, though recently we’ve reverted to six line stanzas, but that’s finding its shape within shape at the moment. Overall, we have been through three stages of making a book — Crown Decline (which refers to the death of trees from the canopy down) — with it both expanding, but more importantly, finding a shape in itself that reflects the different paces of ‘formal-open form’ exchange that mark this interaction, and that embodies our poetry concerns, and our relationship to our worlds, and the world. We operate under no time pressure, and the pattern of ‘swapping’ can be frenetic or drawn-out. These things take years, and, indeed, this has already. The section “Lake Summer Oil Skim” shuffles words taken from a news report: https://in.reuters.com/article/us-oil-spill-storms/storms-aggravate-damage-from-gulf-oil-spill-idUSTRE66549C20100706