From Afar (Translated by Siavash Saadlou) 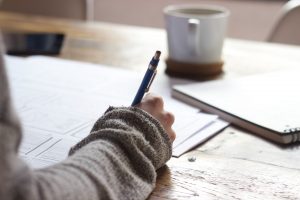 *This piece was translated by Siavash Saadlou

Then she fell in love. Out of the blue. In the thick of final exams, when the spring and the peals of adolescence become one, making you feel as if you were constantly teetering along the edge of a precipice. She had filled out her calculus exam sheet and handed it to the proctor like paper gold. She was walking home through the alleys of Manzarieh now. At her age, everything dawns on you in its naked form, as though a personal revelation; like how, in the shadow of her parents’ incessant dustups, she’d found out she was all alone and that she could endure anything.

Her headscarf had fallen; the sun was out; and her hair band had gone loose because ever since her mom had left the house, it was her dad who would braid her hair by the breakfast table into some semblance of order—disheveled and tottery—much like their apartment. She forcibly pulled the hair band, and there he was, with a basketball and Fast Capsule Nike sneakers, a backpack draping over the shoulders, and russet hair soaked in sweat, partly glued to his face.

He was marching towards Manzarieh. Later he said over the phone that he was on his way to a school exam—physics—which he was. But then he found himself following behind her while bouncing the ball over and over. There was no end to this imaginary basketball hall. She blew her bubble-gum, turned around, and stayed like that, until he reached her. Holding the ball in his hands, he said, “2242835.” Those seven magical digits. To hell with the calculus exam. He stared at the bubble-gum. What a summer lay in store! Full of removed hair bands. Full of bubble-gums. Full of damp russet hairs. Full of 2242835s. Full of Fast Capsule Nike sneakers and backpacks taken off and thrown to the corner of the room. At sunset, he told her over the phone that his name was Amirali.

Amirali would go see her. Throughout June and July. Together, they would swig from her dad’s beer bottles and fill the top with water instead. Amirali would bring with him Kent cigarettes. They would exchange cassette tapes and CDs. The first time they kissed was in the middle of Axl Rose’s screams. Amirali would encircle her hair band around his wrist. They would walk to Nakhl to get pizza. It was while listening to Bon Jovi that they had discovered the mysterious world of each other’s bodies. A world so beautiful that it was insane. Amirali always read her lines from a novel by her bedside and acted silly: “Because I don’t consider you a criminal per se but just naïve and overly romantic.”

When August came, Amirali told her he was planning to “illegally cross the border” and go stay with his mom in Spain. Amirali’s mom had divorced his dad and left Iran, unlike her mom who only dangled the threat of divorce before her dad but never followed through with it. On the last day, Amirali had cried and given her his Guns N Roses t-shirt as a keepsake, walking back home half naked.

She never left her room for an entire week. In September, she would wear the t-shirt under her school uniform. The smell of the t-shirt faded away a week after Amirali had left. But nineteen days later, the first letter came inside a thin envelope whose color bordered on blue, adorned with a stamp of Van Gogh’s Sunflowers and a red seal. She bought a blue envelope and tore apart Bon Jovi’s cassette tape, underlining each sentence in the letter with the tape’s plastic film before sending the letter back to Amirali, awaiting his response.

Amirali never wrote back, but she wrote another letter, then another, and when the number of letters tallied up to twenty—a number she had told herself should be a marker to indicate ‘stop’—she never again sent a letter. Summer was no more. Every summer that followed didn’t feel like one. Instead, she became one of those people who would scour the virtual world for Amirali at the first opportunity. She watched Amirali’s life from afar—when he studied music in Vienna, when he had a concert, when he was with someone new, when he got married, when he got divorced. By then, twenty years had come and gone since that day at Manzarieh. Enough was enough. She could forget about him now.

Aida Moradi Ahani is an Iranian writer, translator, and essayist. Her debut book, a collection of short stories titled A Pin on the Cat’s Tail, was published in 2011. She has also published two novels, Golfing on Gunpowder (2013) and Lost Cities (2018), both to wide critical acclaim. Her fiction in translated English has appeared in Tehran Noir (Akashic Noir Anthologies) and MAYDAY Magazine. Within academia, Moradi Ahani has delivered lectures and talks on contemporary Persian literature at Stanford University and University of California, Irvine, among other venues. Her latest book, Other People’s Beds (2021), is a collection of essays.

Siavash Saadlou is a writer and translator whose works of fiction, creative nonfiction, and criticism have appeared in The Margins, WGBH Boston, and Asymptote. His poems are forthcoming in two anthologies, Essential Voices: Poetry of Iran and Its Diaspora (Green Linden Press) and Processing Crisis: An Anthology (Risk Press). In addition, his translations of contemporary Persian poetry can be found in Denver Quarterly, Pilgrimage, and Washington Square Review, among many other journals. Saadlou holds an MFA in creative writing from Saint Mary’s College of California.