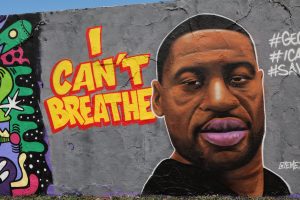 Here are some seemingly unrelated facts: One of my daughters used to babysit a young boy in an apartment down the hall. The boy called her “La-lot.” Without revealing my daughter’s name, I can say that “La-lot” is nowhere close to it. The boy’s name for my daughter was not a recognizable approximation by one whose vocal muscles were still forming; it seemed, rather, a result of a mysterious process in that sweet little boy’s head, and I’ve always wondered what the process was.

In the 1970s, the United States took the dollar off the gold standard. As I understand it, that means that the value—one might say the meaning—of the dollar was no longer tied to the physical treasure the nation possessed; the value, the meaning, of the dollar were now determined by the whim of circumstances and people. Paper money was worth what the common agreement of the moment said it was worth.

In the spring of 2020, in Minneapolis, George Floyd was thought to have purchased cigarettes with paper money that, by common agreement, had no value. The term for such paper money is “counterfeit.”

A short time after presenting this counterfeit money, Floyd died because he had been unable to breathe, and he was unable to breathe because a police officer, Derek Chauvin, had his knee on Floyd’s neck. With his neck under Chauvin’s knee, Floyd let it be known that he couldn’t breathe, after which he called for his dead mother. During all this, there was not a recognizable approximation of human behavior on Chauvin’s part; Floyd’s death seemed, rather, a result of a mysterious process in the officer’s head. I wonder what the process was.

A gold standard ensured that we could say about paper money, “This has value because it is backed by something real.” An instance of paper money’s having no value is when the money is counterfeit.

There is no such thing as a counterfeit life. An instance of a life’s having no observable value would seem to indicate a system in which the value of lives is not attached to anything real—in which their value is determined by the whim of circumstances and people.

Our current circumstance is that the people running the country place no value on certain lives. That circumstance renders certain actions and gestures valueless, one might say counterfeit. One such counterfeit gesture was the president’s walking to a church and holding up a Bible, a symbol of values he clearly cares nothing about.

To what standard might the value of lives be attached? The president does not believe in the standard represented by the Bible. That is true of many other people as well. That in itself is neither good nor bad. But clearly some standard is needed.

Could the standard be that it is our common job to take care of one another? The problem with that idea, aside from its touchy-feeliness, is that it goes against the first concept that many people name when asked what defines America: freedom. The idea, says the most vigorously flag-waving of right-wing Americans, is that in a free country, each person is responsible for him/her/their self. We depend on no one else, and we are responsible for no one else. That sounds good and fair. We will leave aside the fact that no one makes it on his/her/their own; we will leave aside the fact that, historically and currently, some are more free than others.

We will leave it aside because maybe the concept of freedom nonetheless works for our purpose, which is to find a new gold standard, something real to which the value of a given life may be tied. People insist on freedom as the American ideal? Fine. We’re here to hold you to that, Mr. and Mrs. Flag-waver. We insist on the freedom, for all of us, not to be killed for no reason by people who are paid to protect us. We are here to tie the value of our lives to that freedom. That way, the circumstances and the people involved in a given situation don’t matter. Whatever is going through the head of a Derek Chauvin doesn’t matter, any more than it matters how the neighbor boy arrived at “La-lot.” All that matters is for that officer, out of respect for our freedom to live, to remove his knee from our neck.

Clifford Thompson is the author of four books including, most recently, What It Is: Race, Family, and One Thinking Black Man’s Blues. He is a painter and a member of the Blue Mountain Gallery in New York City.