Girl Versus Gun: What I Learned from Dating a Responsible Gun Owner

He slept with a teddy bear until he got a gun. Then he slept with his gun. That is not what Machiavelli meant when he wrote, “There can be no proper relation between one who is armed and one who is not.”

We met online and dated for years. Farmer John (FJ) lived in the country. With no neighbors in sight, he counted on himself for protection.  A whole tractor disappeared when he  was out of town. FJ was rigorous about obeying the law and circumspect about what he hunted. Inside his house, books from two generations filled every room. His mother had been a teacher. He was not an ignorant man.

When he came to town, he watched for potential threats, ever present.  There was never an occasion to draw; the violence FJ feared was what he carried in his mind.  The gun – and the belief system it grounded – defined his identity.  It consolidated his participation in a collective identity of shared beliefs. The motto inscribed in the hobbits’ ring could be changed to apply to them:  One gun to rule them all, one gun to find them, one gun to bring them all, and in the darkness bind them.

In the girl versus gun conflict, the gun won. The gun always wins. FJ, who loved to travel in the wilderness, who once kept bees, and who canoed in the rivers he fished, supported the legislation to shoot wildlife in the den, to lift safeguards on clean water and air, and to plunder national parks for oil and gas interests.

When I asked, near the end of us, “Just this once, can we go to a theater without a gun?” his voice choked up, anguish apparently genuine. He might have thought of something besides “I can’t.”   “Fine. I’ll take someone else.”  And I did. 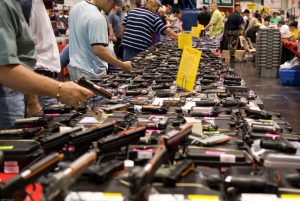 Here’s what I learned through my travels in gun-world.

Marilyn Moriarty is the author of two books Writing Science through Critical Thinking, a scientific writing textbook, and Moses Unchained, which won the Associated Writing Programs Creative Nonfiction Award. Her essays and short stories have been published in The Antioch Review, The Chattahoochee Review, Creative Nonfiction, The Kenyon Review, Nimrod, Raritan, River Teeth, and others. Three essays were named “Notable” by the editors of  The Best American Essays series in 2016, 2019, and 2020.  She won the 2014 Faulkner-Wisdom Gold Medal for the essay. Her memoir What a House Remembers, What a War Forgets is due out in 2024. She teaches at Hollins University.