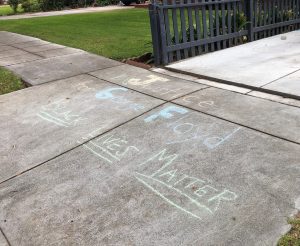 J-U-S-T-I-C-E. I am writing in neon chalk on my driveway as four bare white feet dance in all directions around me. Jonas, three years old and exploding into boyhood, grabs the green chalk and scribbles around my letters. Emet, six, takes the yellow and joins him. They make a wild display of loops with no direction, the colors of glow-in-the-dark and arcades. I want to tell them to stop. To shake their shoulders and yell, What I’m doing is serious! You’re making a mess of it! STOP LAUGHING! Don’t you understand?

I had walked outside to be alone. Grief and rage sat heavy on my chest that morning, making the latest game of Candyland feel impossible.

I saw the chalk lying on our driveway, left out from yesterday’s hopscotch, and I picked it up. Maybe if I shared a message with my neighbors on the sidewalk, some solidarity, if I could release the pressure in my throat into words for other adults, I would feel better.

But the boys followed me outside before I could finish the thought. Motherhood. They have been orbiting around me like moons ever since their schools moved to small boxes on screens. I am their whole world now. It is crushing and beautiful.

I take a deep breath and let them keep scrawling all over my writing. The sun is shining through the canopy of ficus trees above us, the air thick with new summer. And they are full of joy in this moment, so rare since we’ve been in quarantine. How can I stop them?

“No,” I say, talking to both of them now, as I write F-O-R. I am slowly realizing that my walk outside has turned into a morning class I am unprepared for. But I am a community college teacher, and I know how to give a lesson on the fly. “It’s justice. Do you guys know what that means?”

Emet’s shoulders shrug and Jonas ignores me. As if I’ve asked them to wash their hands before dinner or share a toy.

They have stopped listening by the time I am writing G-E-O-R-G-E. But I see the opening now, and I want to keep going. There is so much to cover.

I turn to Emet. “That man we talked about the other night when the news was on. Who was killed by the police. Is that fair?”

“Nope,” Emet says, over-confidently, like it’s a math problem that’s too easy for him. Since birth, he has rejected the premise that he needs to be taught things.

I want him to read George’s name, George, but I realize it’s full of irregular phonetics, that first e there for a reason I can’t explain because I’ve never seen it any other way. Being the boys’ teacher at home these past two and half months, I have learned the world is full of invisible mistakes like that—mistakes you’ve lived with so long you only see them when a child asks why, and you have no answer.

Overhearing us, Jonas, way too chipper, asks me, “Mama, who got killed?”

I don’t answer, hoping he’ll forget, wishing he hadn’t heard. Three seems too young to talk about murder. Six might be too young, too, but Emet, always alert, had overheard the news that weekend and had questions. His dad and I did what we had been taught to do by the emails his school sent out anytime there was a crisis. We followed his lead, stuck to the facts, and stayed calm. We tried to share only what he was ready for. But he asked about who George Floyd was, how he died, and why people were mad about it. If he had the words for the questions, we figured, he was ready in his own way for the answers.

That was two nights ago, and now he thinks he is already an expert. He wants to tell his little brother about the policeman killing someone, but I give him a look with my eyes that says, No. He’s not ready. Please keep this part to yourself. I forgot that siblings make sense of the world together.

Jonas’s eyes are bright with excitement now. “Who got killed, Mama? Who? Who? Mama!”

He is obsessed with good guys and bad guys, so the idea of a real-life fight with a real-life killer has caught his attention. I worry it’s my fault—he’s watched too many shows and movies with his older brother—Spiderman and Power Rangers, even Karate Kid—so much fighting for a three year old. On the rug in his room, he keeps a pile of action figures four feet wide. Throughout the day, he will sit down, choose two at random, assign one the role of good guy, one the role of bad guy, and bang them together in front of his face, grunting like a linebacker, until he deems one of them the strongest and the other one dead.

“Mama!” he yells louder and faster now. “Who killed someone? Who died? Mama!”

F-L-O-Y-D. I carve the letters slowly, thinking back to the night before, when I finally watched the full video. Eight minutes and forty-six seconds of one man holding his knee on another man’s neck, calmly snuffing the life out of him, ignoring his cries of I can’t breathe! I can’t breath! It was George crying out for his mama that kept me awake most of the night. I heard his Mama! caught somewhere in his throat, as I opened my eyes that morning. This muscular man, so square and tall, in the height of his manhood, pushed to the ground, relenting to the suffocating force of another man overpowering him, and begging, in desperation, for his mama.

Each night, Emet calls for me when his body is ready to drop into sleep. Since infancy, he has held a primal fear of the abyss that awaits him on the other side of awake, and so he does not drift off peacefully. Instead, as he tires, he flails and protests in bed until he cannot fight any longer. Then, he breathes a deep sigh and reaches for my body, needing my touch while he passes from one world to another, as if I am the tether that holds him to earth.

I read somewhere that it was this—the cry for his mama—that made George Floyd’s video, and not the countless others of Black people dying at the hands of White cops, spark protests all over the world. I believe this is true, that the word mama is what brought so many people to the streets. Mama is an easy word, spelled just like it sounds.

I think about telling Jonas, No one died, honey. No one. It’s all pretend, like Doctor Octopus or Green Goblin.

But I can’t do that. I am staring at George’s name in chalk. And that feeling in my chest is still there, tightening, rising. “His name is George Floyd, and he was killed by a policeman. And it wasn’t fair.” I exhale these words without thinking.

My voice is shaky now. “Because George Floyd had black skin, and the policeman had white skin, and the policeman thought people with black skin were bad.” This does not sound right coming out of my mouth. I wish I had read those websites and articles I’d been saving about how to talk to young kids about racism. I consider running inside to consult them before saying anything more, but it is too late now.

Jonas is laughing, like I’ve made a joke. “Black and white skin? No one has black or white skin!”

I should be better at this conversation. For years, I have facilitated discussions about racial inequality with my college students and even my colleagues, but they are all adults, and they have stopped asking why. We speak the same language.

I don’t know how to back myself out of this corner with Jonas. We sit silently staring at our arms. It is clear to me now that I am failing. That I have failed.

“But I won’t get killed by a policeman, right Mama? That will never happen to me!”

He is parroting the exchange we have with him after we watch nature documentaries and he asks us whether he’ll get killed by a piranha or a lion like the fish and antelope he saw being consumed, ripped apart. We are telling the truth when we tell him that those predators are real but that they are also very far away, and he doesn’t need to worry.

He looks again at what we’ve drawn with our chalk. He can’t read yet, but he recognizes something I’ve taught him.  “J!” he says. “For Jonas!”

“Yes,” I say, “That’s right.” I think about leaving it there. Three-year olds learn their names first, letter by letter, and I am proud of him.

But as a teacher, I know that we learn by stepping into the space between the words we know and the words we don’t. I can’t stop here. Instead, I bend down until I’m looking Jonas in the eyes, like Fred Rogers might. I smile with warm approval, and unfold my words slowly, one by one. “J is for Jonas! And it’s for Justice, too.”

I’m back where I began, and I know now that this is where I should have stayed. We needed more time on justice. It’s a rookie move for an educator, to think teaching is about covering content. “Contact, not content,” is a new mantra of mine at work. Of course we can’t learn George until we learn Justice.

Jonas and Emet run together inside to play yet another round of Monopoly Junior. They’ve already mastered their favorite part of the game: dancing when they win.

I notice our broken chalk on the sidewalk—neon green and yellow and blue, colors not found in nature. I consider packing them up, but I leave them out, perched on our fence like little fluorescent flares. They’re reminders to come back tomorrow to see what remains of the words we’ve made, what has blown away, and what we still have to write together.