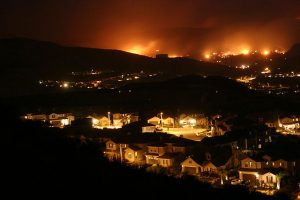 Oh, I’m no Roman emperor.  Kingdoms aren’t for me. My house is my corporation, with no room for mistakes, each outcome calculated, each cost projected, each bread loaf home-baked.

Artist and statesman both was I, a poet who also played the lyre, promoted the Olympics, served as champion of the arts. Did I destroy my first home? Yes, her influence had waned. And maybe I raised taxes. But did I mean to char that city crisp?

My future’s hoped, prayed, and arranged for, with four modest walls, one roof, two floors, where I control the lives of those I adore, keep them inside, locked down and protected. I perfect the pot roast and potatoes each night, pick the best grey for the hallways, adjust the pictures in their silver frames. My web of comfort’s no mirage.

It’s base propaganda, saying I played backlit by flames as three, then seven districts billowed ashy clouds. I wasn’t planning for my next estate. I rebuilt it all, and yet still I’m reviled, called corrupt, capricious, contemptible. Go on, then: list the bad omens, tally my lost loves, lay bare my affairs and call me slave to whim. Leave my story tarnished by those who hated me and wrote it down. Sad.

“The political isn’t personal” my favorite pillows proclaim in cheerful cross-stitch, in gold cursive, in chunky block print. The words follow as you wander through my house, insist your life can be lived with such precision that you don’t ever get burned.