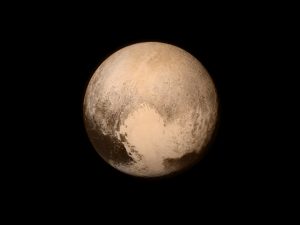 Shouting, stammering, or dousing with vinegar,
what can unhinge the vaults of belief?

Pluto, full-fledged, is still round, still orbits our sun
but doesn’t dominate its path. Downgraded

once, to dwarf planet, then reinstated. Definitions are fluid,
or sclerotic, strung up like kites, darting, dying,

dependent on the prevailing winds. We remember
the sleight of hand, the streets cleansed, polished, of gypsies,

Jews, the homeless. We knew who dominated that orbit,
even as they said, no one here by that name.

Today, my brother believes someone stole
his birthright, his guarantee, how else

did he end up here? Without. His job
replaced by machines…not a fact

he wants to face, just as I can’t believe
how facts flee—become spineless porcupines—

as we roll around in bubbles, immune
to rubbing up to trouble, craving

some longed-for-emperor worship,
all of us in a cracked-glass warship.

Is it a question of matter
that strings us together?