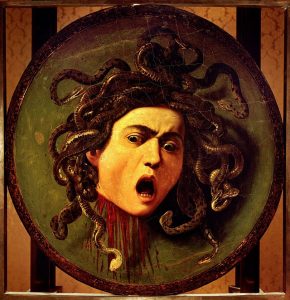 Statue of the Leader as Perseus

Atop his heroic nudity, a soft
cap, though rendered in marble, with rounded crown
and a stiff brim projecting from below
the logo MAGA now marmoreal.
Transfixed by that severed female head, suspended
in his left hand (his right armed with a smartphone),
he of course has turned to stone (the sculptor
was witty).

While amid her predatory
maelstrom of hair these slithering letters—So sad
to see! Dishonest media! O Nike!—
seem (the illusion is uncanny) to knot
and re-knot themselves in motion. And on the plinth
this inscription, frozen:
The hero, triumphant,
masters the fatal gaze of the feminine.

Then the Lord Answered Job Out of the Tweetstorm

So what, I did it! Afflicted you in every possible way. Just to win a bet. Now you’ll understand that the sanctimonious odor of your days, your slaughter of time in pious ritual, is nothing to me. What the void at my center craves—and you must agree, it’s a magnificent abyss—is absolute loyalty. No room on twitter (Sad!) for the corner-

stone of creation, much less the sea with its proud waves. Can barely squeeze in the wilderness and the appetite of young lions. One unicorn. A single ostrich egg. Or leave room for the glory of the horse’s nostrils. Still, my tweetstorm shows your pain’s Lilliputian and cannot contend with mine. Better get tough and smart before

it is too late! We will always have a great relationship with foreign powers like Satan! Domestically, you and I have entered into a private contract. Nondisclosure and no complaint. Toss the golden coin of your loyalty into the gnawing void of creation. Any loss of goods and family will be compensated for, abundantly.

Check out the other poems in our “…knave, beggar, coward…” Goodbye! series!