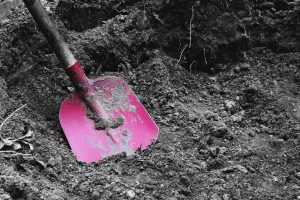 My brother digs holes in the ground
all day long every day he would rather
dig a hole or four hundred than go home
to the family at dinnertime sit around the
table gutting chicken picatta in silence.

He would rather drive the landscape truck
up and down the turnpike till his legs
turned to pins and needles his toes
on the gas tank hardened like cement
and the state trooper pulled him over
even though you’re going nowhere
you have to pay the tolls.

He hates to dig holes in the ground
all day long but he’s chemically
forbidden to lack compassion for the old
toothless Cambodian men in the backseat.
Penny’s back is breaking. Who else
will carry the cinderblocks?

One day they pass a deer dying on the side
of the road. The old toothless Cambodian men
like to make jerky from roadkill so my brother
stops the truck and kills it with a shovel
quarters it severs all the appendages
packs up the meaty parts
digs a hole in the ground to bury the head.