Learning to Swim Again: Confronting a Legacy of Childhood Trauma 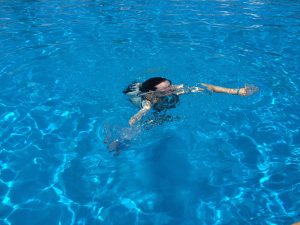 As a young child in Sweden, I was a bold, free-spirited girl; I was at home in my world. I roamed as I pleased in our small fishing village on the west coast, where I was raised by my grandmother, aunt, mother, and cousins. In the summer, I sprawled on my belly on the rocky beach, practicing the breast-stroke with the other children, until we were released like young otters to ride the currents of the ocean. I swam until I turned blue, undeterred by the frigid water. In the winter, my cousins and I donned ice-skates and held tight to a large sheet, allowing the biting wind to push us across the lake behind my house. We sailed faster and faster until dry land stopped us. Back then, only the traditional stories my grandmother told me about trolls living in the woods aroused any inkling of fear.

When I was six years old, the sky fell down on me. My mother and I left my grandmother and our extended family behind. We moved to New York City, where the endless grey sidewalks and looming buildings shut out the earth and sky. The ocean was nowhere in sight. My world shrank to a small apartment in uptown Manhattan. I clung to my mother as never before; however, in Sweden, I had been protected from my mother’s volatility and rage by my grandmother. Now I was at the mercy of my mother’s mental instability, which grew worse as she was overwhelmed by working, raising me, and going to college. I never knew what would trigger her terrifying rage: sometimes, it happened when I came home from school half an hour late, because I’d lingered to share a milk shake with a friend. Most of the time, she took no notice of occasional tardiness. When I was as young as seven, she routinely sent me to shop for groceries by myself. Money was tight, and if I failed to buy the cheapest brands, she would scream at me that I was selfish while throwing my purchases around the room, sometimes hitting me. But worst of all was the silent treatment she subjected me to afterwards for endless hours or even days. Since she was struggling to make ends meet, she relied on friends to watch me. Beginning when I was seven years old, she relied on her charming friend Cliff, in particular. Cliff sat for me for free until after I turned eleven, when he moved away.

I blocked out most of my memories of what went on during my time with Cliff. I can recall only a few isolated moments. Sometimes, a feeling associated with certain acts he forced me to perform will resurface, and I’m afraid that I’ll choke to death. I remember snippets, like being videotaped by his girlfriend when he was about to assault me. Any actual rape (like most of the sexual trauma I experienced for years) was buried so deep in my memory that I still can’t access it, despite years of therapy. I don’t know how often he molested me, or how many videos of those acts he made and circulated. The knowledge that images of my violation may exist somewhere out there haunts me. I didn’t tell anyone what happened with Cliff, not until I was an adult.

A brief flashback surfaces: I was in a car with Cliff. He drove on a highway where snowdrifts were piled up along the road. We were going to stay with his friends in Maine for an entire week. What was my mother thinking, to allow this? I can only imagine what he and his friends might have done with me. I don’t remember any of it. Once, he came along when my mother and I visited my mother’s best friend in another city. Her daughter Sissy was two years older than me. Many years later, in our twenties, Sissy, told me about a scene that she said I witnessed, although I have no memory of it. Cliff babysat us two girls (ages 11 and 13) while our mothers went out. Sissy told me that he raped her right in front of me, and when she struggled, he put a pillow over her face so that she couldn’t scream. Until she shared this memory with me, I don’t think I fully realized that Cliff posed a constant threat of violence, and not only to me.

Unlike Sissy, I’d always complied with Cliff’s demands. Maybe I instinctively sought to avoid more trouble, as I’d learned to do when interacting with my mother, by anticipating her needs. (I later learned my mother was diagnosed as borderline. This explains a lot about how she treated me.) Even after Sissy described Cliff’s assault in detail, I still couldn’t retrieve any memory of it. There are good reasons why most of my memories of being abused remain blocked. But now I understood why I dreamed so many times about an imminent rape, a dream in which my panic was intensified by my inability to cry out for help. When I heard Christine Ford describe how Brett Kavanaugh covered her face with a pillow so she couldn’t scream, it forced me to visualize her terrifying assault. During that assault, another boy stood by and did nothing to protect Ford from rape and possible suffocation. I couldn’t help drawing a parallel to Cliff’s rape of Sissy, when I apparently stood by silently as Sissy struggled, and he tried to smother her. The difference was, I didn’t interfere because I felt powerless and afraid. This was a man who had already repeatedly violated me. I was under his spell.

The news that Judge Brett Kavanaugh’s appointment to the Supreme Court had been confirmed despite Dr. Blasey-Ford’s testimony of sexual assault at his hands knocked me flat. Literally. I had to lie down on the floor for hours, as I do when the pain from fibromyalgia overwhelms me. At times like that, I attempt to lose myself in music. But this time I found no relief. The pain felt like a vice around the base of my skull; it sent lightning bolts down my neck, my left shoulder, and my arm. My husband walked by while I was lying on the floor, and said, “This didn’t happen to you, I don’t see why you’re taking it so hard.”

I was struck speechless. He knew about my history, and yet he didn’t understand the truth. As Senator Cory Booker had so clearly stated: survivors of sexual assault all over America were resonating with the raw pain of Dr. Blasey-Ford’s revelations about the long-term trauma she suffered after Kavanaugh’s attack. I felt rage at the realization that the majority of men—including my husband and those in power—continued to dismiss the magnitude of sexual abuse and assault and the impact of these crimes, the lifelong trauma so many girls and women endure.

Not only was I forced to relive the pain caused by the abuse I’d experienced as a child, now I understood my marriage featured a similar dynamic, one that I had felt equally helpless to end. People wonder why women remain in abusive relationships, but this is common among survivors of sexual abuse—we are apt to feel paralyzed during later experiences of abuse. Survivors can feel like “damaged goods” and doubt that anyone else will be willing to accept them. They may even unconsciously choose relationships that imitate or parallel others in which they were victimized.

When I was a child, I couldn’t depend on my mother for help. I developed defensive strategies instead, the only way I knew how to protect myself. I retreated into my head, disconnected from my body, and submitted to Cliff’s domination, in order to avoid what I feared might be even worse. I still drew on those defensive strategies in my marriage, when faced with my husband’s persistent disregard of my emotional limits during sex. The things he wanted me to do reminded me too much of that early abuse I faced and retriggered my reaction to that early trauma. I’d learned back then to cope with Cliff’s assaults through submission. Although this had ensured my survival when I was a child, now that I was an adult, this strategy needed to evolve. It got in the way of my efforts to create a healthy sexual and emotional relationship with a man.

I could no more change my husband’s sexual behavior than I could have prevented Cliff from raping me; I could only protest afterwards. I tried explaining why I needed him to stop. He argued that he needed to engage his imagination during sex. This lack of empathy was also apparent in the Senate’s dismissal of Christine Ford’s ongoing suffering, compared with “ruining a good man’s career.” Only once, when I cried silently during sex and my husband noticed, did he choose to stop what he was doing that upset me. I “solved” the problem by withdrawing from him entirely as a sexual partner and sleeping in a separate bedroom. Now, ten years later, the incident with my husband during the Kavanaugh hearings reminded me of the pain that was behind that “solution.” It’s clear to me now that the problem of my marriage demands a more direct response.

That day when I lay on the floor in pain and rage, I understood that my chronic fibromyalgia pain, so severe that it left me unable to work, was my body’s way of telling me that my emotional pain had reached an unendurable threshold as well. I had to acknowledge it. I decided that from that point on, I would defend myself from violation and domination.

Soon after the Kavanaugh confirmation, something unexpected occurred: my recurring dream shifted. This time, I escaped my attacker. Somehow, I kept slithering out of his grip, the way I used to slip into the ocean as a child–like a lithe otter swimming expertly against a current. In the dream, I dragged my attacker into the daylight. I gestured wildly to passersby (I still couldn’t scream), and, for the first time, someone came to my aid. He was taken away. I made my way home in shredded clothing, but otherwise I was okay. I awakened from this dream to the comforting weight of my cat stretched out along my hip. I realized it was a kind of breakthrough. Although I was still unable to scream, I’d found another way of signaling my need for help, and I’d avoided being raped.

Now, I swim in the ocean in the summertime once again, and when it gets too cold, I swim in the Olympic pool at the YMCA. This swimming is physical therapy for my fibromyalgia, but even more important, I’m drawn to the water for the emotional release and confidence it brings. Swimming gives me the sensual joy of actually inhabiting my body, letting go of the disconnection that was my longtime defense. Moving through the water with power and grace, I feel a new sense of control.  I trust the water to hold me up. I lift my arm out of the water as if a string were pulling at my elbow; I extend it fully, my hand poised to enter the water at the correct angle, and I pull my arm down along the length of my body. I focus on the feeling of the water against my hand as I break the surface with each stroke. In those moments, I see a promising glimpse of my unscarred self, a girl as exuberant and confident in her skill as an otter swimming in a familiar river.

Note: This essay has been published under a pseudonym.