I landed in Guangzhou to a newly polished, eerily silent, cavernous airport from my vacation in Vietnam. As I watched a middle-aged man carefully polishing an already gleaming section of marble wall, the feeling crept up on me that coming back may not have been my best idea. Boarding my almost empty connecting flight offered little comfort.

A few days earlier the department secretary at Xiamen University interrupted my vacation in Vietnam to strongly suggest that due to the Coronavirus threat, that all foreign teachers should return to China ASAP. This proved easier said than done as borders closed and flights were cancelled. I book a small prop plane into Cambodia, waited the required 24 hours in Phnom Penh and caught a flight to Guangzhou.

Upon landing in Xiamen, my eleven co-passengers and I downloaded a phone app, entered our personal information (passport, where you planned to stay, had you been to Wuhan, were you feeling healthy) and the code given by the flight attendant. Our phones were scanned and temperatures checked as we made our way towards baggage claim.

The few who spoke did so in hushed tones, as if their silence was a form of protection.

Aside from us, there were perhaps 50 people there, tasked with defending their city from an invisible invader. Soldiers were stationed against the all the walls and at each exit, fully geared up, rifles, helmets, standing at full attention. Unmoving. Unblinking. Frozen, determined statues I hoped would not suddenly thaw and come to life as I nervously ambled past.

A country at war.

Once in the taxi, I checked my phone. The recent Wall Street Journal article entitled, “Sick Man of Asia” was still raising the nation’s ire on the social media platforms, and in my opinion, rightly so. On the unusually quick ride home, aside from a red plastic bag billowing across the road, not another car or human being in sight: desolation. My driver, however, was a glass-half-full kind of guy. “See, no traffic,” he said, his eyes smiling above his blue surgical mask. “Everything will be fine, a thousand people a day are returning, every day it gets better.” With only his eyes to judge, I couldn’t tell if he truly believed that.

Outside my apartment stood a red tent. As I approached, two young men in matching red vests, blue masks and white gloves waved me over. One of them pulled out a white gun shaped piece of plastic, and at arm’s length pointed it an inch from the middle of my forehead. Against every instinct, I leaned into it, hands at my sides. 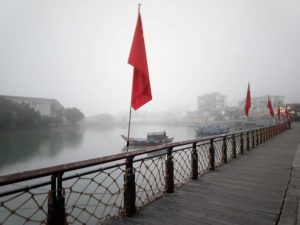 After a long discussion with the guard in my apartment building it was finally established, by way of plane ticket stubs and visa stamps, that no, I hadn’t returned to the US over the holiday and yes, I was aware that I must self-quarantine for 2 weeks in my apartment, an internment I naively took lightly.

My plans to bury myself in my work were quickly foiled when it became clear that it was my computer, not I, that in our travels, had caught a virus. I learned that 2 weeks is a long time not to speak directly to, or be in the presence of, another human being. It rattles one’s perspective. Luckily, Murakami, Greene, Tartt and Ford came to my rescue, filling the vacuum in the evenings. During the day, it was my small balcony that became my private box seat, and I, a rabid spectator.

I woke to birds chirping one morning, convinced I was back in North Carolina. The weather had warmed. A cool breeze blew softly. Shuttered factories, few cars, fresh air, blue sky and high-def visibility. It was as if the outdoors was seducing the residents towards betraying their semi-self-imposed quarantine.

The egrets, magpies and sparrows ruled the city. That is, until the morning I saw the elderly woman in a bright yellow jacket standing in the middle of the park. Just standing, surrounded by emptiness. Part of the barricade, shoved aside.

The next morning a few seniors were there exercising.

Soon after, although in smaller numbers, the grannies, nannies and toddlers returned.

Several times every day, I received text messages instructing me to wear a mask, wash my hands, stay inside don’t eat wild animals and not to gather in groups. But today’s message was different.

“The municipal government is happy to announce that tomorrow the city’s public parks and gardens will reopen.”

My evening walks, solitary and surreal. Closed shops, darkness, the hum of generators.

A stray dog turning its eyes towards me as if to say, “what did you do with the others?”

But then, one night, the faint sound of voices.

A blushing light on the wet pavement.

Four people, eating under a warm glow in the street. Their laughter cutting through the darkness.

This was new. I exhaled.

In the following weeks, some shops reopened. Seniors took to the park, albeit at a distance. Is this hope? Victory? Or a short break before the second wave comes crashing down？

As the number of infections began escalate in the West, Xiamen had just celebrated sending its last coronavirus patent, an elderly woman, home, completely cured. Suddenly the threat was no longer from within, but from outside.

Some had started to refer to the virus as the foreign or foreigner virus. My evening walks were no longer solitary, but still isolated, as others veered across the street. At times, upon seeing me, families quickly corralled their children, and rushed by. A little boy smiled and waved at me the other day. As I waved back, his mother told him he shouldn’t do that anymore.

I understand. They are afraid. They want to protect themselves and their family. I get it.

I felt I had to apologize to the couple who own a restaurant I frequent, for scaring away potential customers who fled when they spotted a foreigner at a table. The couple shrugged it off with a smile: “You are always our customer.”

Those who know me see me as me, those who don’t see me as it.

Although in good health, I have come to symbolize the sick man of the West, septic, soiled and impure.

I always wear my mask.

But it no longer works.

Joseph Cichosz is a socio-cultural anthropologist, a Fulbright Scholar, a singer, a songwriter, and a surprisingly good cook. He lives in North Carolina and Xiamen, China, where he teaches professional writing, cultural adaptation and cross-cultural communication at Xiamen University. He is currently working on his first novel, “When Chronos met Einstein”.