I recently saw photos of Instagram influencers who had darkened their faces in a misguided show of solidarity for Black Lives Matter. Their efforts made me cringe and reminded me of a time in my own life when what began as empathy resulted in an equally ignorant act of cultural appropriation. It started when I was eight. My mother and I were watching the evening news. Ruby Bridges appeared. She was a little younger than me, and she was being escorted into a classroom in New Orleans by federal agents while a mob of surly white Southern parents and their equally surly children protested the school’s integration. Those children looked a lot like the children I went to school with who either tormented me or made me feel invisible. I identified immediately with Ruby. 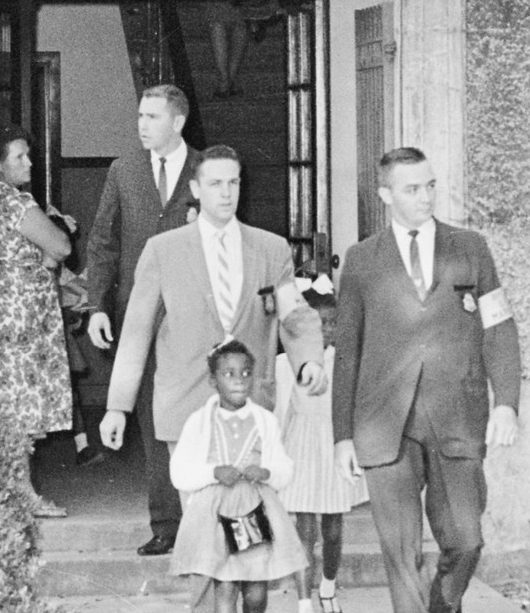 I wasn’t Black. I was the smallest-in-the-class, allergic-to-everything Jewish girl living with my two older brothers and our parents in La Crescenta, a then all-white, mostly Protestant, almost entirely Republican neighborhood in an isolated Southern California suburb. We were among very few Jewish families living in a community where it seemed there were churches on every corner. There were also two John Birch Society offices and a minister who tried to resurrect a branch of the KKK. There were no Black people, no people of color. We stood as the only “Other.” In case being nearly the lone Jews among gentiles wasn’t enough, in almost every respect I could think of, my family was unlike our seemingly even-keeled, apparently contented neighbors. We were eccentric, hypochondriacal, and self-dramatizing, and my parents were far-left Democrats.

There were maybe five other Jewish children in my school, some of them “passing,” that is, making no public claims to a Jewish identity. But my father, whose oversized personality and booming voice meant that he could blend into no crowd, had helped found the community’s first synagogue. Our classmates knew we were Jews. My brothers faced overt instances of anti-Semitism—pennies pitched, Swastikas drawn, “Hey Kike” and “Christ-killer” shouted. The cruelty I experienced was subtler. Part of what tortured me was that I was never sure how much of the ostracism to attribute to my being Jewish and how much to the many other traits that may have contributed to my unpopularity. I was unathletic, anxiety-ridden, shy, prone to hysterical crying, and overly attached to my mother.

By the time civil rights leader Medgar Evers was assassinated, I was in sixth grade and I fully identified with the civil rights cause. I wrote a poem in his memory, decrying the injustice of his murder. My teacher read it aloud to my classmates, whose silence convinced me that they did not share my outrage. None of us knew any actual Black people. La Crescenta’s realtors and property owners still adhered to the restrictive covenants that barred home sales to anyone other than “Caucasians.” Jews’ status as Caucasian seemed to be a matter of ongoing reinterpretation. My parents were able to buy the house, but when they  moved into La Crescenta, they received an anonymous letter suggesting they would be more comfortable living among their “own kind.” When a Black family moved into neighboring Tujunga, the threat was more overt—the far right editor of our local newspaper, the Ledger, trumpeted the news with a fear-mongering headline.

My sole real-life contact with a Black person consisted of occasional visits to the man who shined shoes, made keys, and sold toys in a small building in a parking lot behind the shopping district in neighboring Montrose. Did I have any understanding of the level of persecution that he faced, the fact that he was not allowed to rent an actual storefront, or the degree to which his notable kindness to me might have felt obligatory?  All I knew about Black people and their cause was drawn from the limited, often either overtly or subtly racist images I could garner from newspapers, magazines, and TV. But my lack of contact did not prevent me from projecting my own experience of oppression, my own outrage, indignation, rebelliousness, and anger into their cause. It became inseparable in my mind from my cause.

And then, I took the leap and went from writing poems honoring fallen Black heroes to writing poems in the persona of my limited notion of a noble Black man. I preferred imagining myself as a brave Black man fighting for his freedom rather than as a timid, awkward little Jewish girl. The image freed me from the ambiguity of my own situation: it freed me from agonizing over how to fit in, from feeling like a powerless victim. Imagining myself as a fighter for freedom suggested a different response to oppression than what I’d known so far. My imagination had liberated me from what felt like the trap of my own identity. And yet, this imagining was an act of theft, all the same, because it relied on partial images that bore no connection to the reality of Black people’s lives. I was using those images as white people had used the images of Black people for centuries. And I could take this identity on and off as I chose. No matter how much I read or how many pictures I looked at, I could never know what it was really like to be Black. This is the case whenever we embrace a cause not strictly our own. We may think we understand; we may revel in our “virtue.” But there are limits to empathy and dangers in applauding ourselves for the extent of our personal sacrifice. Those limits require us to address  other people’s causes with humility, because we will never really know what it’s like to be a member of a group whose cause we embrace.

By ninth grade, I had turned my outrage into action, speaking up on behalf of the civil rights movement in the classroom, debating the cause at every opportunity. Homeroom, 9 a.m.: The teacher called me up to the front of the room. I was having my period and convinced that when I stood up, every boy’s eyes would be riveted to the telltale triangular outline of my sanitary belt and bulky pad. Perhaps, I worried, there was a misshapen stain of blood seeping through the back of my skirt. I felt anticipatory shame. At the sound of my name, two boys, one of whom sat beside me, the other behind, began to whisper. As I rose, they addressed me. “N-lover,” they said. N-lover? It took a moment to sink in. It wasn’t a slur I’d ever heard before.

At first, I felt relief that they weren’t making fun of my leaking female body. Then the vileness of their words soured in my ears. I felt disgust. Then a different feeling surged through me: a righteous pride. Being hated for what I believed, for a just cause, gave me a potency that did not come with being hated for something that felt essential and unchangeable about me. There was a new political movement growing in the world beyond La Crescenta that these kids knew nothing about. “What’s the matter with you guys,” I said, striding past them. It was the bravest I had ever been in their presence. This cause had fortified me to stand up to an affront on their part that went beyond their usual “teasing.”

Supporting the civil rights movement gave me a new sense of my own Jewish identity as well – I knew that a large percentage of the young people who’d risked their lives in the Freedom Rides were Jews like me. Being Jewish didn’t have to mean being sickly and neurotic, which was how I sometimes felt–it could mean taking a brave stand for equal rights. I could visualize myself among those freedom fighters, as part of this big, new, powerful family of social activists, Black and white together. We would march through the streets, lock arms, sing “We Shall Overcome.” Though at fourteen I had no way yet to attend those marches, I had taken to singing along whenever I heard “our” anthem sung on TV. I could choose this, as I had not chosen being Jewish or small or clumsy or anxious. I could choose activism, but it was years before I understood that I was lucky, privileged, to have that choice. By tenth grade, I would join Robert F. Kennedy’s campaign as a youth volunteer and feel that in some small way I had moved from thought to action in taking up the fight for civil rights.

I was on my way out of La Crescenta. Soon I would read books by James Baldwin and Ralph Ellison and Toni Morrison, and my understanding of what it meant to be Black in America would expand beyond the limits of my overactive adolescent imagination. Still later, when I finally had the opportunity to work alongside Black men and women and form close relationships with them, my understanding deepened significantly. I could finally begin to grasp just how diverse and complicated Black identity was, not the unilateral image I had used to prop myself up.

I’ve never known how to talk about this aspect of my personal history. Like so many white people before me, I had appropriated Blackness for my own personal use. At the same time, I had glorified my own identity through a fantasy of white saviorism.

Still, if we had to rely for social change only on those with purely unselfish motives, I suspect no change would ever come about. We come to activism through a combination of self-interest and empathy, the  latter being bedrock to our survival as a social species. But we also must recognize that owning our self-interest—even if it is only to feel righteous in embracing just causes—is essential, too. It will keep us humble, and humility must, first and foremost, guide every effort to try and understand experiences and motives outside our own. There are always going to be parts we get wrong. Often all wrong. Of course, segregation, separation, and ostracizing ensure inaccurate projections. We are more likely to get more things wrong about those we think we’re identifying with when we have little or no direct contact with them. And our relationship to a cause we can choose to identify with is always going to be fundamentally different than it is for those who feel the very survival of their people is on the line.

As I began to take small-scale social action, my world and my limited notions of other people grew. The movement enabled me to engage with a world larger than my family, my school, my community. The civil rights movement was not “my” cause, but it helped me to overcome my own shame, to move beyond a limited vision of my own power and my own identity. It helped to save me—but that was not its purpose. I hope that those demonstrating now will find their experiences meaningful in some of the same ways. But I also hope they will have more clarity than I had about the limits of empathy and the dangers of projection.