No Classroom Is an Island 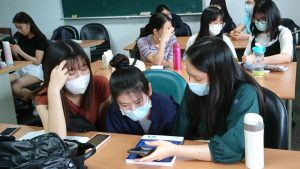 “Remember Hoping Hospital?” I started my oral training class with a rhetorical question.

The eighteen English majors, even the active speakers, had been quiet since the class began in early March. Due to the outbreak of COVID-19, the spring semester was postponed for two weeks. After the longest winter break ever, students were back, but they had not totally emerged from hibernation.

“What happened today, seventeen years ago?”

“I was only three then.” One of them broke the silence, her voice muffled by her face mask.

April, 24, 2003. I remember vividly the sudden lockdown of Hoping Hospital in Taipei and the panic it triggered across the island. More than one thousand medical workers and patients were quarantined for two weeks in the hospital in order to curb an internal spread of Severe Acute Respiratory Syndrome (SARS). Nurses waved white banners through the windows of the sealed buildings, crying and shouting for help.

This contagious disease originated only 100 miles away in southern China at the end of 2002; soon it spread to Taiwan and other Asian countries. Taiwan stood alone, like an isolated island, at the frontline of the fight with SARS. The only armor in that hard-hitting battle with the invisible enemy was face masks. Three days after the lockdown, the U.S. Centers for Disease Control and Prevention came to the rescue.

“What a hell,” an American expert exclaimed upon entering the quarantined hospital.

To me and older people in Taiwan, Hoping Hospital is a reminder of the tragedy of the 2003 SARS epidemic; to the young people in my classroom, it is simply a tale retold that evokes no feeling of the past.

The lockdown of Wuhan on Jan. 23, 2020, the day before Chinese New Year’s Eve, opened the door to that painful memory of the SARS outbreak. At the same time people in Taiwan headed home from work like shooting arrows for the annual family reunion, five million people fled Wuhan for homes or shelters in other cities and countries. Their outbound travel patterns from the epicenter of the deadly coronavirus looked like a tremendous firework explosion on the Google map of China. What a striking way to welcome the Year of the Rat! It spurred an eerie feeling of deja vu as breaking news of coronavirus dominated the reunion dinner. “No wonder,” my mom came to a sudden realization, “Mrs. Wang’s daughter and grandchildren came back from Wuhan to live with her.”

I felt uneasy, quietly walking to the closet where my mom stored face masks. From the deep dark corner of one shelf, I found a couple of N95 masks neatly sealed in a plastic bag. As if discovering treasure, I showed the “armor” to my siblings. My brother said, “I bought them seventeen years ago. We need to buy new ones.” It then dawned on me that the 17-year-old Toyota I drove one hour home was also purchased in the same year to avoid possible transmission of SARS in public transportation. During the new year holiday, the first case of coronavirus disease in Taiwan was confirmed: A middle-aged Taiwanese businessman returning from Wuhan. I was not surprised to hear Johns Hopkins University predict that Taiwan would become the second-worst affected area.

The old ghosts of SARS circa 2003 returned on New Year’s Eve in 2020. This inner terror unified Taiwanese in the fight against the coronavirus. The Central Epidemic Command Center (CECC) was activated before the first infection was confirmed. Watching the press briefing at two o’clock every afternoon for updates of COVID-19 has become many people’s daily routine. As if binging a favorite TV series, Taiwanese follow the latest developments of the pandemic, listening to the reports of anonymous cases of infection. They also took advice to wash hands, take their temperatures, wear face masks, and maintain social distancing. When tracing the travel history and contacts of the infected people was implemented as a prevention measure, the Health Minister and CECC head urged the public to support these guidelines under quarantine: “No one would like to get sick, so don’t label them. Preventing the spread of COVID-19 is possible only when the truth is told. Panic and confrontation are not helpful in containing the virus.”

Like most neighbors in my hometown, my mom stays tuned to the CECC daily briefing and TV news channels for updates of COVID-19. She watches the news report as if it were a disaster movie: coronavirus savaging China, South Korea, Italy, Spain, and the U.S. While the settings may vary, the theme remains the same: Infected patients in isolated wards, dying alone with no funerals. Once moved to empathize with the victims, she wondered aloud whether the world was facing ruin. When I heard her sigh over the loss of innocent lives, slowly emerging in my heart were the lines I read many years ago at college: “And therefore never send to know for whom the bell tolls; it tolls for thee.”

Unlike my mom, young people liked to tell what the minister, nicknamed Ah-chung, said and did at the daily briefing:

One day a reporter mentioned the mask-rationing system that only allowed parents to choose small sizes for their children, but not colors. “But boys don’t like to wear pink face masks because they are afraid of being laughed at.” The next day Minister Ah-chung and his team put on pink face masks at the press conference, to demonstrate that “Colors are genderless.”

When the police found that messages had been sent from abroad threatening to harm him, Minister Ah-chung responded calmly, “Pandemic prevention relies on teamwork, not individuals. I can be replaced any time.”

Ah-chung said, “The virus attacks us in two ways, physically and psychologically. We have to be unified in the fight against coronavirus. If not, we’ll be defeated.”

“Follow the directions of Minister Ah-chung” became a catchphrase among Taiwanese in response to different opinions, such as “to mask or not to mask”.

“So have you ‘listened to Ah-chung’?” I used the catchphrase to jump-start the class discussion. “How do we respond to COVID-19 today?” I asked.

“Bill Gates praised Taiwan for handing the pandemic effectively,” one of the students responded immediately.

This opened a window of opportunity for learning. I played Gates’ 2015 TED Talk, “The next outbreak? We are not ready.” After that, the eighteen English majors were divided into six teams. Each team gathered information online about the coronavirus outbreak in a country the team was interested in and then represented that country in giving a report on COVID-19. In addition to Taiwan, five national teams were formed: Japan, Korea, Italy, France, and the U. S. While presenting collaboratively as a team, students were astonished at the increasing number of infections and the climbing death tolls of the countries they had been dreaming of studying in. These devastating scenes seemed to make them think more about the question I’d posed earlier.

“Do you know that seventeen years ago, Hoping Hospital was shut down shortly after zero cases were proudly announced?” I asked.

“Are we global citizens ready for the pandemic?” I asked.

“In a time of isolation,” the Taiwan team again replied, “we choose solidarity.” The team leader held up her iPhone to display an eye-catching statement in a full-page advertisement from the April 14 New York Times. It was a crowdfunded call initiated by a Taiwanese YouTuber to include Taiwan in the World Health Organization (WHO), in the global fight against the COVID-19 pandemic. The other teams googled the advertisement. Its blue headline popped up: “WHO can help?” Seeing the WHO blue logo, I asked myself, “Who can help?”

Amid my students’ energetic discussions of the final question, I walked out of the classroom, into the sweet outdoors. Through my mask, I could still smell jasmine and osmanthus in the courtyard. Simply standing outside the Language Building, I savored the floating fragrance of flowers, feeling the gentle breeze on my face. Some students with masks on waved hello to me on their way to the building. Among them were foreign students studying in the university. They looked content wearing their masks. Feeling hopeful, I decided to join the flow of people out of the campus. On the way out, I found some students strolling in campus, some waiting in line, one meter apart, outside the cafe, while others roamed on the sunny meadow. I had an epiphany at that moment: seventeen years after SARS, “this island of resilience” responds to the new virus with solidarity. As I watched the stone stairs leading to the main university gate, I was surprised to spot a wrinkled white mask blown to the sidewalk. It seemed to announce the end of a silent spring.

Kai-Lin Wu is assistant professor of foreign languages and literature at Tunghai University in Taiwan. She teaches English academic writing, second language writing research, and readings in English prose. She received her PhD in English Education from the University of Iowa in Iowa City, where she learned and fell in love with literary non-fiction. She is the author of two English composition textbooks for Chinese-speaking students.