Notes from the Plague Year: A Funeral Deferred 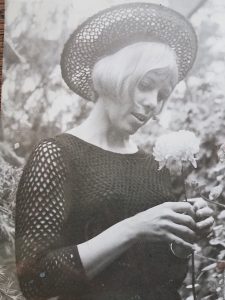 At five a.m., there was a bold flash of light and then a tremendous roar of thunder. Car alarms sounded throughout the neighbourhood. An early riser, I stood on the front porch, gazing into the dark as the rain began to batter the sidewalks. It is hard not to take any odd thing as an omen, in these dark days. It has rained steadily in California since I arrived on March 7th, my airplane from the UK only just ahead of the initial wave of coronavirus. People at Heathrow wore masks, looked at fellow passengers askance. Already subject to suspicion, my bag was searched twice before I boarded. If something was coming, might I not be carrying it?  The day I flew, two baggage-handlers at Heathrow tested positive for the virus. I’d armed myself with a nose spray said to deflect colds. It trickled a chemical taste into the back of my throat, making me feel both tainted and falsely immune.

I risked travel to come and help arrange my mother’s funeral. She lived a long, productive life, as a small-town lawyer and businesswoman, and had thoroughly enjoyed herself. Traveling the world, she was a lively pianist and an ace tennis player before her final years, which were marred by a descent into vascular dementia. Her death came more as a relief; I’d been grieving for years. My three brothers and I began to arrange the funeral, which we then had to un-arrange due to the virus restrictions. We had planned the funeral service at a meeting with our local Catholic church; somewhat strangely, it was that very day that a lockdown was suddenly imminent. We guessed, later that evening, that we would have to delay. We are now in a peculiar lacuna, ‘locked-down’ and attempting to clear her house of years of accumulated things. My brother Andy is slowly painting the entire house. Gone are her subtle colours: the sunset yellow of the dining room, the sky blue of her bedroom, all replaced by a stark white, except for the vibrant green living room, the shade of a spring leaf, where she kept her piano and entertained her many friends—this is deemed nice enough to keep by the estate agents.

Retrospection and cleansing are good ways to spend these days. Otherwise we spend too much time watching news bulletins with scary numbers and Donald Trump trying to furiously back-peddle from his latest mispronouncement. One day, just before all the national parks close, I slipped down the short stretch of highway along the beach that separates our town from the southernmost suburb along the Mexican border. This is the home of the Tijuana Nature Reserve: several square miles of wetlands, the watershed of the Tijuana River. It is deserted, yet spectacularly adorned with a superbloom of yellow flowers, encelia californica. I tried not to think of numbers as I stood on a path, rufous hummingbirds flickering over my head. There are 3.2 million people in San Diego County; just over the border (now closed except for essential traffic) there are 2.1 million people in Tijuana. The only time Tijuana has made the news is for the ironic report on how they were not, in comparison with their U.S. counterparts, panicking about the supply of toilet paper. Tijuana residents were shown gaily handing out presents of toilet paper rolls to the grateful on the United States side of the border. Meanwhile, we see San Diego hospitals building tents in their car-parks for the expected deluge.

My mother had a minor hoarding habit: I uncover mounds of dross along with treasures: the only photo I’ve ever found of her and my grandmother who died before I was born—my mother a lace-wrapped baby and my grandmother a vision from the 30’s with permed hair and a mink-collared coat. Also, decades of airline tickets, cocktail napkins, greeting cards, diaries begun and then abandoned, drawings and notes we made as children, our incriminating childhood report cards (D- in handwriting but Amy “likes to read”), those school photos in repeats, all our childhoods trapped in the 70s. And worse, vicious correspondence between my divorcing parents. And, voilà, their actual divorce papers.

Old photographs are the hardest to let go, and perhaps this is why she kept so many. Maybe it was a premonition of the memory loss to come, a way to hold onto the past? I find several Victorian-era ancestors, stern in sepia tint, whose names we shall never know because my grandmother married “beneath her,” and they disapproved of my lanky, personable grandfather who drove a horse-driven milk cart on a daily round in Decatur, Illinois. There is a single picture of him, looking natty in a depression-era trilby. Here is a small 1950’s photo in black and white, my mother on a beach dangling her first baby in the water. She has the same pale skin and cropped blonde hair as my daughter (now in her 20s). There are some striking slides, the jewel-like colours of the negatives intact, of my father climbing into the cockpits of various jets he flew for the Navy in the late 1950s and early 1960s.

In the 60’s my mother had a serious flirtation with photography. She took and developed stunning black and white photographs of the family. I keep all the big 3×3 negatives from her Hasselblad that I can find, and put them carefully in envelopes. My mother left me all of her fine china, but this is her real treasure trove. She has captured all five of us at the ages we were at the time: 6, 7, 8, 10, 12. There is a picture of our handsome father, seated on a rock by the sea. There is her own self-portrait, wearing a chic black outfit and holding a chrysanthemum. We use this for her obituaries. We place a copy on our household shrine, her funeral still deferred.

Amy Wack grew up in Southern California. She has an MFA in Creative Writing from Columbia University in NYC and has worked since the early 90s as Poetry Editor for Seren books, based in Wales, Great Britain. Her poems have appeared recently in Long Poem Magazine, New Welsh Review and in the ‘States of La Frontera’ special issue of Pacific Review.