When they showed up at my ready door, 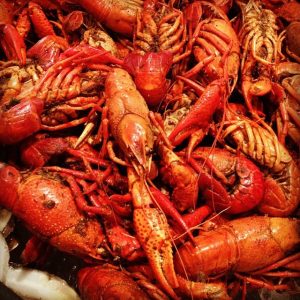 it was their taste for flesh that misled me,
and it was a picture produced later
that confirmed what provisional and corrupt
intelligence we’ll go on, and successfully.
They were not, as I previously reported, wearing
the same blue suit, so subtly pinstriped
it may have been only threads throwing
light as they shifted or leaves casting shade
as they moved in the wind, each suit accented
by the same tie or scarf, red and fat,
an open palm’s width slapping where it dangled,
and they didn’t share one face, a pale disc
accentuated by too-squared off teeth,
a pudginess of indulgence improbably
occupying the same space as cheek bones
so sharp you could force a beer open off them.
I didn’t recognize the nuances, the glances
scurrying behind their eyes staring out:
one was composed entirely of clawed
and crawling things, like langoustines
or crawfish, what the locals call mudbugs;
this one was colonized as if by larvae blooming
over cans of cat food someone so generously
left out for the strays. They had a foot thrust
in the doorway already when I politely tried
to explain I had no cash, no pen, no working
internet, but I’d consider the literature,
mail in the poll later. That’s fine, one said, tenderly.
Just fine, another’s breath said hot at my ear.

He moves through air like he’s pressed to a lens.
He hears a crowd each time he holds a pen.

A child, he drew plans for a wall so huge
you could see it from space, then learned it was true.

For a week, he woke from a single dream—a wolf
of the steppes—wet beneath his blanket’ s wool.

He relieves himself. He lifts his belly’s fold.
He knows which bolt is merely painted gold,

which pocket holds the real one. Every mirror
calls to him. Earbuds bloom in the off hours

around his offices, then hitch along
to the airstrip. The engines hide his songs.

When he thinks to express them, his hands swell
plumply like grapefruits. Most days they’re navels,

from glaring all night at a palmed, lit screen,
then a convocation of eagles feeding

off scraps that leap from his mouth while reigning
over seas of love. If the room’s constrained,

the marshal’s in cahoots with the camera.
No one noticed through the rain’s panorama

the drop caught in the deep crook of his eye,
when inside him a Bavarian sky

opened—he cried, “Papa!” His tongue waiting
like a leather strap to align the blade.

Asked for his favorite character in the tale,
he’d said Geppetto. He knew it was the whale.

That in the event the way were blocked—smoke
in the bulkhead, a tumble in the aisle—
there would be a procedure, yet something

instinctive, the hive suddenly organized
as a hive to make good with our escape.

That in the event, a map will appear
in your seat pocket, the nearest path clearly lit.

That in the event, the unexpected one
speaks up for the crowd, “I can report we’ve learned
how to swim,” before applause crashes forth

and our work is to churn in the bucket
for the holes they discovered in their pantry
the exact moment their guests were expected
for the dinner party. That in the event,

there were actually two events running
side by side, the same ticket scanners
posted at each entrance. For this landing,

we will believe it was only ever
one event, for which it stands, indivisible.

That in the event, you are permitted
to return, not to prayer, but some image
of having just looked up at the sky, the sun
blinding out the parking lot before you drift

from the service. That in the event, time
will slow; you could count the brown flecks
like seeds or pollen dusting your neighbor’s eyes.

That in the event, you’ll be accounted for,
regardless of the seat assigned to you.